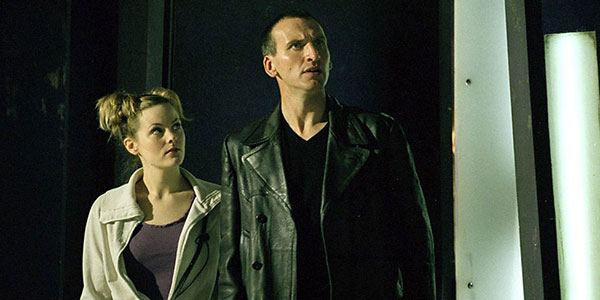 There’s no way I’m going to get through all of New Who before next Thursday — but I can at least wrap up the first season. Which means meeting a certain mischievous canine as I review Doctor Who: Bad Wolf.

So, when the BBC announced that, aside from the New Year’s Eve special, there would be no more “new” Doctor Who in 2019, I hit upon a plan. I’d rewatch and commentate on all of the rest of “new Who” until such a time as actual new episodes were available to watch.

On and off through 2019, I did just that… but as it turns out, way too slowly and not by a short amount. There’s simply no way I can get through all the adventures of Tennant, Smith and Capaldi before New Year’s Day 2020.

But Eccleston? Yeah, that I can do. I’ve only got two episodes to go.

When last we saw the Time Lord, it was the conclusion of Boomtown, a story I liked more than I expected. But before I launch into Bad Wolf, some spoiler space. Hmm… what’s appropriate here…? Remember, beyond the spoiler space video lurks my observations on Bad Wolf, so if you haven’t seen it, leave now.

Ah, the Jagrafess. A quick recap of The Long Game on the copy I’m watching, followed by a 100 years later card. That’s never ominous.

And then a cold open of The Doctor emerging from a cupboard… into Big Brother. Oh boy, there’s a reference that has NOT aged well.

Cameras are everywhere. Back in 2005, before one could buy Google or Amazon home speakers with cameras in them, this seemed farfetched.

Rose wakes up on a cold dark floor with a stranger staring at her. The unkind part of my brain says it’s probably not the first time she’s done that.

“Don’t provoke it. The Android’s word is the law”

Probably not those Androids.

The “Anne-Droid” is of course also a highly dated reference, but this is played more for dark laughs than anything else in this episode.

The Doctor’s memories are returning. Kyoto in 1336, and they only just escaped.

And now I SO want to see that story. Kyoto’s lovely, and it would have at least been interesting back in 1336.

Roderick, Rose’s co-contestant is also from space, and knows his way around a Numberwang board!

The Anne-Droid drops a Torchwood reference. I’d better have a drink!

Hmm. Barrowman jokes about plastic surgery. Having seen him in Arrow, that’s a joke that seems to have stayed with him.

Rose ponders running from the Anne-Droid, before another contestant beats her to the run. That doesn’t end well.

Now, it’s true that Big Brother was HUGE when this originally went to air… but it’s also true that I never cared for it in any incarnation. The housemates watch as the evicted housemate is atomised; that seems just a little bit harsher than the show I never really watched (or at least my memories of it). Something tells me it’s not that dark.

“She’s been evicted… from life”

Not one of RTD’s best lines, that one.

The Controller is one serious Matrix nightmare.

The Doctor is suitably outraged by the death of 60 contestants at once. And Christopher does ANGRY so well. Not that his successors don’t, but there’s some serious good annoyance at play here.

And now the Trinny/Susannah bots go nuts, and Captain Jack pulls a gun out of his… well, yeah, there.

Why do Weakest Link contestants get a load of credits, when Big Brother ones just get to live? I mean, sure, there are clearly no real survivors, obviously, but still — it seems odd.

The big Bad Wolf callback. Not at all subtle here, but then I guess the show did need to get casual viewers who weren’t paying attention up to speed.

Of course, the Doctor knows he’s not going to die at the eviction. And let’s face it, if all you get to do is live then you may as well run with the Doctor. Mind you, the Doctor does promise Lynda that he’ll get her out alive. I had my doubts at the time that this was true.

OK, I laughed at that one.

“Countdown, where you’ve got 30 seconds to stop the bomb going off.”

These sets look very much like those from The End of The World. Which, let’s face it, they probably are.

The Doctor is at fault for the world that he’s now in — which is not a “new” idea for Who, but again it’s well handled here.

The Anne Droid does a Face of Boe namedrop! I’d better have another drink.

Rose goes with Reyjavik. To be honest, guessing, I’d go that way myself.

And then Rose gets BLASTED to dust. It’s a great moment, and even the noisy Murray Gold score works very well indeed. And Christopher has his “somebody is going to be RUINED” for this face on.

That’s SUCH a Doctor Who moment. Guns don’t matter when you’re The Doctor.

The Tardis is in Archive 6. So clearly the mysterious force also brought that forwards from Kyoto!

The solar flares allow the Controller to talk to the Doctor. A great, tense moment. I mean, yeah, I know what’s coming, but first time out it works well enough (if you haven’t seen the trailer, that is.)

Jack “kills” Lynda — but it’s actually a transmat beam. Which means Rose is alive! And other contestants presumably, but let’s not care about them.

Rose is chased by a VERY familiar eyestalk. There’s not much mystery here for the longer-term fans. Especially with that reflection behind the Controller before she’s killed. You might even say… exterminated.

The Doctor uncovers the fleet, and he’s appalled. Mind you, you would be by half a million Daleks.

See, even when you’re dealing with genocidal death machines, being polite matters.

SO MANY DALEKS. Which is a problem I’ve talked about before in Dalek.

But first, a next time trailer. A relatively restrained one actually in terms of real long term spoilers. With a nice “THEY SURVIVED THROUGH ME” bit.

But before I embed the trailer, I’ve got to work out where it sits in the rankings of season one!

Time to rank the episodes of Series 1:

Bad Wolf has some badly-aged elements — as an example, I’ve had to explain to my kids, born around the time that Doctor Who returned to our screens — what all the game show elements really were — but it hangs together rather well, and of course it leads into The Parting Of The Ways.

For timing reasons, I’m going to watch it immediately after Bad Wolf, so stay tuned for that writeup very soon indeed.

Next time: The Parting of The Ways. May feature traces of Daleks.

1 thought on “Thoughts on Doctor Who: Bad Wolf”