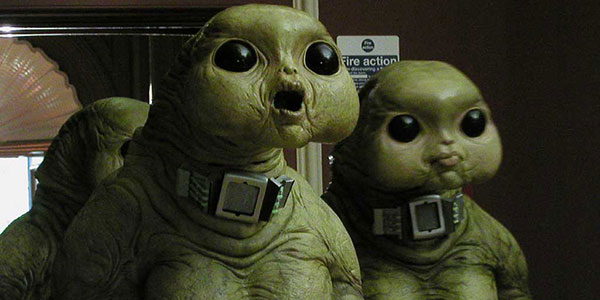 In which an astonishing title for a Doctor Who story is wasted on a bunch of farting CGI aliens. But has time made it any better? Let’s find out.

So, I’m very, very slowly working my way through the “new” series of Doctor Who, new in this case meaning the show’s revival from 2005 onwards.

And I’ve come to the episode that, before I started on Christopher Eccleston’s one and only season was likely to either come last or second last, based on my memories of the episode.

If you’ve read my recap of Aliens of London, you’ll get why. Still, that episode in some limited ways was actually better than I remembered, largely because of the drama that played out around Rose’s abduction-that-wasn’t, rather than the Slitheen that were.

So, onto the second part, World War Three!

The interplay between Jackie and Rose is easily the best thing in this episode… but that is in NO way hard, and it’s just not enough to save this stinker of an episode. First clunker of the new series, but then, I’m happy enough — because I know what’s coming next!

But before I do, it’s time to…

Rank the Episodes of Series 1:

No surprises here if you’re keeping track. You can click or tap on any episode name to go to my thoughts on that episode

Next time: They’re back… and in perhaps their best episode EVER.