Posted in Reviews
Author: Alex  Published Date: February 18, 2019  1 Comment on Thoughts on Doctor Who: The End of the World 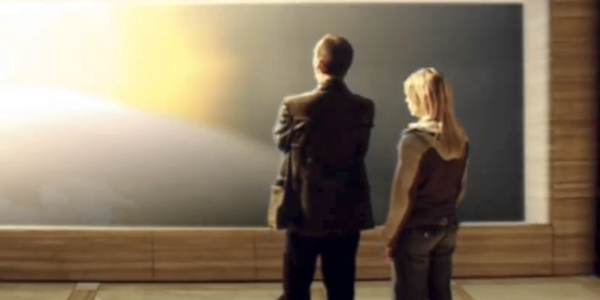 Onto the second episode… and I feel fine.

Time once more to go back in time… a bit.

Owing to the lack of “new” Doctor Who in 2019, I’ve decided to go back and watch the rest of “new” Who… which isn’t very “new” at all, considering that the Christopher Eccleston series debuted in 2005, which was some time ago now.

I’ve already covered off Rose, which you can read about here, and, of course, if you want something more contemporary, I’ve also written up every one of Jodie Whittaker’s Doctor Who stories from series 11, which you can also enjoy.

I feel like I should try to explain about the bit with the blue dog… but you probably had to be there.

So, as is traditional, this is very much stream of consciousness stuff, but before I start, just in case, I’d better have some spoiler space. And this seems like the most appropriate spoiler possible.

Final thoughts: This isn’t much of a “story” as it is a plank to set up what’s to come. That makes watching it a fine exercise, but only in the context of watching further episodes. It just doesn’t stand up all that well by itself, because it’s pretty thin.

Time to rank the episodes of Series 1!

With only 2 eps in, of course, the ranking is rather obvious.

Next time: The Unquiet Dead, and a maid who might be more significant than she seems!

1 thought on “Thoughts on Doctor Who: The End of the World”