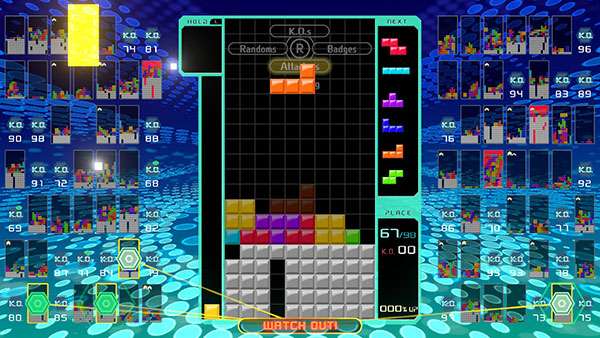 Nintendo announced a rather surprising spin-off in the Tetris space today, in the form of Tetris 99.

Now, this is a series that’s seen its fair share of weird, wonderful and sometimes downright awful variants.

Everything from classic Tetris:

To whatever the hell Faces… Tris III is…:

I’ve even written about some of the weirder Tetris variants, both good and bad.

There was the utterly abominable Tetris Blitz, which you can read about here.

And then there’s the not-quite-Tetris that was Bop-It Tetris, which you can read about here.

And now there’s Tetris 99. It’s a sort-of free game for the Nintendo Switch with mostly classic Tetris rules in effect, and one notable “twist” in the gameplay.

Tetris 99 is taking on the style of the time (something Tetris games have done over the years), by incorporating a Battle Royale style mode. Yep, that’s right. While you play, 98 other players are also simultaneously playing Tetris as well.

Competitive Tetris isn’t a new concept, and the rules are much as they always were. Score well, especially with multi-layered clearances, and your opponents’ “well” fills up with bricks, bringing their demise ever closer.

When you’ve got 99 players, however, it all gets rather hectic. Tetris 99 manages this by using the joy-con sticks to select your next “attack” point.

You can go all out random, go for easy KOs, or attack those who are attacking you, but of course you have to keep actually playing Tetris while doing so.

Now, if you were paying attention, I called it “sort of” free.

That’s because it’s free to download, but playing it involves having a Nintendo Online subscription.

If you’ve already got one of those for your Super Smash Bros fix, or because you’re keen on the free NES games, you’re set. If not, you’d be investing $5.95 a month on it, with a 7 day free trial available. Nintendo does make it a fair bit more desirable to go for a longer subscription to save money, for what that’s worth.

Block around the clock

So, the big question is, does it work?

As a Tetris game, sure.

It does have that annoying “spin” rule in play, where a placed block can be infinitely spun until it’s in the orientation you prefer as long as there’s space.

As a bit of a purist I’m generally not a fan of that. However, the pace of Tetris 99 means that you don’t often have that much time to spin pieces anyway.

The scale of the game, like many battle royale games, means that it can be unfair sometimes, because if multiple players do stack onto you, your board can fill very quickly.

Smart play can dig you out of that inverted hole, of course. If you do line up blocks on the auto-filled sections, they’re treated like any other combo.

I’d like to think I’m a reasonable Tetris player, and it’s definitely otherwise one of my “zone out” games.

Tetris 99’s pace doesn’t entirely allow for that. Still, I’ve generally placed well within the last 30 or so players in the games I’ve managed so far, which isn’t bad going, especially for a slightly older gamer like me.

In Soviet Russia, game crashes on you

Tetris 99 is not super-stable, however. I’ve had more than a few games simply crash on me, dumping me back to the main menu, which is super-frustrating if you’re doing well.

I can somewhat see why it’s a “free” game in this sense, because if it was a paid effort, I’d be far more annoyed with it.

Naturally, it’s also quite dependent on having that critical mass of players with reasonable latency levels between them, and that’ll be a question of just how popular it stays.

Right now, there’s not likely to be any issue with finding games because it’s totally brand new and I can imagine Switch users who already have a Nintendo Online account giving it at least one try.

Six months from now, though, will it still be playable? I guess we’ll have to wait and see.