Posted in Reviews
Author: Alex  Published Date: March 4, 2019  Leave a Comment on Thoughts on Doctor Who: The Unquiet Dead 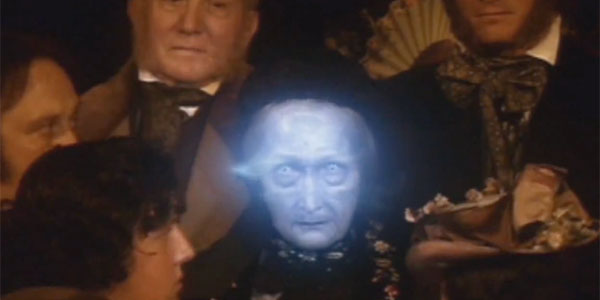 “Will you dead keep it down in there? I’m trying to watch Doctor Who!”

Yes folks, it’s time once again for me to dive back into series 1 of Doctor Who. That’s from 2005, not 1963, although I do love all Doctor Who equally.

I’m doing so as there’s no “new” Doctor Who this year, and I already wrote up my thoughts on Jodie Whittaker’s generally excellent first season, as well as for “Rose” and “The End Of The World“.

So it’s time to shift onto episode 3, The Unquiet Dead. As always, these are stream of consciousness thoughts, and I have seen the individual stories before. But it’s been a long while since I watched them in order, including episodes I’m less keen on.

It was, of course, my intent to write this up last week, but my day to day work got in the way. Or, to put it in a rather more Doctor Who appropriate way, Barcelona.

Folks who know what I do for a living will get that, I’m sure.

Also as is my style, something to act as spoiler space, on the teensy-tiny chance that you’re reading a review page for a series that’s now 14 years old and haven’t actually seen the episode in question:

Final thoughts: I recall not thinking much of this one on first viewing, but it’s gone up quite a bit in my estimation on a new viewing. Yes, the effects have aged, and you’ve got to like a horror tone with your Doctor Who, but it’s actually pretty darned solid!

Mind you, I already know what’s coming up, and that’s a two-parter I’m not particularly fond of at all.

But before I get there, it’s time to…

Rank the episodes of Series 1!

Rose just pips out The Unquiet Dead, and if you’d asked me before I started if they’d even be close, I wouldn’t have thought so. Which rather validates rewatching, I think.

Next time: Aliens of London.