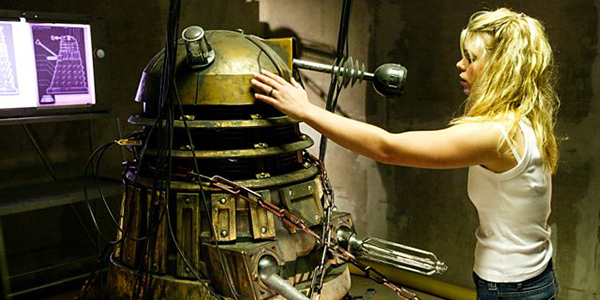 Just the one, mind. Wouldn’t want to get greedy.

My trek… no, wait… wrong series… my journey through time (yes, that’s definitely better) through Doctor Who continues after the disapppointment that was World War Three, with the first appearance in the new series of a classic villain. Or at least that’s what the title would suggest.

As is traditional, a little spoiler space just in case you haven’t yet seen Dalek. Also, a series I’d actually watch more of:

Van Statten is a silly villain, but he can’t take away from how very good this episode is.

I’m going to go further than this, and say that this is the best Dalek story of the new series.

Spoiler alert: They turn up again, but they’re never as threatening as this one single Dalek is. Scaling them up in numbers doesn’t make them worse — in many ways it dilutes the threat.

Also, what an amazing change from World War Three. And with that in mind, it’s time to…

No surprises there. This is Doctor Who at its very best, old series or new.

Next time: To the future, via both Spaced AND Black Books!