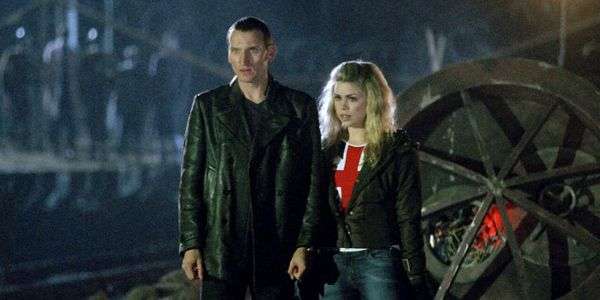 In which I’m glad Doctor Who is British and not American. “Are you my Mom” just doesn’t have the same ring to it.

I was never going to leave this story as a single-watch exercise, so literally as soon as I finished writing up The Empty Child, I launched into re-watching The Doctor Dances.

Again, this is to fill the Doctor Who shaped gap in my life left by the absence of new episodes. Rumours are swirling of a Christmas special this year. I live in hope… but not much of it.

As is my usual style, these are totally stream of consciousness reviews, and I’ve seen the episodes before, but maybe you haven’t. Spoilers lurk within, and I hate spoilers. So if you want to back out, do so before the end of the embedded YouTube clip. Don’t say I didn’t warn you.

Even before the episode starts, I’m pondering something from The Empty Child. We see the hospital, with all the Gas Mask Zombies lined up in beds, right?

Who put them into their beds?

Whereas this story opens with The Doctor, Rose and Captain Jack about to be touched in a very special way by the hospital zombies, while Nancy is about to suffer the same fate in the house she was earlier stealing food from.

And how does The Doctor solve this crisis?

It’s not quite up there with history’s greatest speeches, but it works. Even across London, it works.

“I’m really glad that worked. Those would have been terrible last words!”

Roll the credits! Why, it feels like only 45 minutes ago I was watching these credits!

Nancy is upset about Jamie. Of course she is… as far as we know, he’s her little brother.

The masks are… flesh and bone? I mean, I could get the darkened flesh for the black bits, but the metal? How does that work?

Pompeii is nice… which suggests that Captain Jack gets to Pompeii. As long as he never runs into the Doctor there, I’m sure it’ll be fine.

Nancy is accosted by the actual homeowners in a neat gas mask gag for thier… one child? How much food were they planning to eat at this ONE meal?

Back with the Doctor and Jack, and this exchange which explains, quite neatly, why The Doctor is The Doctor:

You’ve been to the factories?
Once.
Well, they’re gone now. Destroyed. The main reactor went critical. Vaporized the lot.
Like I said. Once. There’s a banana grove there, now. I like bananas. Bananas are good.

We hear Doctor Constantine interviewing Jamie, who just keeps asking his question. We have classic horror movie vibes here, and the more gentle music score that helps the mood along.

Hey, I called something pertinent! Namely, the gross quantity of food the family had, especially now it’s clear it’s only 3 of them. It is indeed an awful lot of food.

And that’s because Mr Lloyd is messing around Mr Haverstock the Butcher. Which is timely (for its period) blackmail and of course, as awkward as hell in the modern context.

Back with The Doctor, he has a sudden realisation that he’s done something rather stupid by heading to room 802.

I sent it to its room. This is its room.

Another jump scare, another music sting that feels very Pertwee. Just my perception?

Jamie can punch through walls. He’s strong for a 4 year old!

The Doctor and Jack are… measuring things. Sonic things. I’m sure there’s no subtext here, right?

This can function as a sonic blaster, a sonic cannon, and as a triple-infolded sonic disruptor. Doc, what you got?
I’ve got a sonic, er. Oh, never mind.
What?
It’s sonic, okay? Let’s leave it at that.
Disrupter? Cannon? What?
It’s sonic! Totally sonic! I am soniced up!
A sonic what?!
Screwdriver!

Rose saves the day, which makes for a nice change. Also, it lets Jack and the Doctor keep sniping at each other.

Come on, we’re not done yet. Assets! Assets!
Well, I’ve got a banana and in a pinch you could put up some shelves.

Nancy admits that the child always comes after her.

Florence Hoath is GREAT in this role. So utterly believable in every way.

Autotypewriting is also nicely spooky. ALthough I’m left wondering why there’s no carriage return “DING!” after each line.

Jack has teleported out, but only him… for now.

This is a great example of minimalist episode making. Everything is dark, and that’s fine, because it adds a layer of tension to each scene. Naturally, it’s also much cheaper that way. Probably freezing on the streets of Cardiff London though.

Rose challenges the Doctor to a dance-off. See, Doctor Who predicted the end of Guardians of the Galaxy too!

The Doctor notices how Rose’s hands have no rope burns. Not like last time. I mean, he’s curious as to how that happened.

And they’re in Captain Jack’s spaceship, and the nanogenes come back into focus. Which does rather make the conclusion a little obvious. Not that obvious is neccessarily bad.

Captain Jack is missing memories, and he’d like them back. It’s been a fair while since I’ve watched Torchwood, and I genuinely can’t remember if this is ever resolved. Or for that matter addressed ever again.

Nancy has been captured, but she’s handcuffed next to a soldier with a familiar hand wound. Again, fantastic acting with just two actors, a table and a light score.

Nancy is begging for her life, and I want her to be free. This is harrowing, but unmissable.

Rose isn’t Algy’s type. But Jack is. As a story, the sexual politics are all over the place here!

Algy thinks Jack is his.. Mummy. This will not end well.

The guards are alll becoming Gas Mask Zombies. We’re clearly racing towards a finale. Especially as a bomb is incoming.

Nancy has managed to survive by singing nursery rhymes! I love it! It works entirely well in context (and even moreso if you know the whole story)

I maintain that the Chula Ambulance is a Red Dwarf Garbage pod. Knowing the BBC’s capability to recycle props, it’s actually possible, too!

I haven’t mentioned this before, but the beauty of the gas mask is that it’s unnerving, but very cheap to implement on anyone. Buy 50 of them, drop onto extra, job’s done. Nicely, too.

The Sonic can reattach wires now? It’s starting to pick up the magic properties that make it rather difficult to appreciate.

The ambulance of course was full of nanogenes. They found dead Jamie, wearing a gas mask. But they didn’t know what humans were.

The Doctor is monologuing. But it’s Christopher, and he’s burning, and it’s mesmerising!

Florence Hoath is SO good as Nancy. Barrowman is practically pantomime by comparison.

And we get the big reveal, which is that Jamie is Nancy’s son. Back to the mores of the time in a fashion that seems horribly dated, and yet so astonishingly accurate. You can totally get why Nancy acts the way she does, because it’s what society tells her she must do.

Nancy hugs Jamie, and my eyes well up. Sure, the nanogene effect is a touch naff, but that just DOES NOT MATTER. Pass the tissues.

Christopher is beaming as he removes the gas mask. Absolutely OVER THE MOON.

Jack manages a last minute intercept of the bomb, but he’s not planned this well.

And because I couldn’t be grinning enough, there’s this exchange:

Mrs Harcourt. How much better you’re looking.
My leg’s grown back. When I come to the hospital, I had one leg.
Well, there is a war on. Is it possible you miscounted?

See, I TOLD you that Hall & Oates clip was contextually relevant.

Jack, meanwhile, is taking a German Bomb into space. But he didn’t plan for escape well. His termination has a 100% probability. I mean, it’s not like he’s immortal or anything.

Emergency protocol 417: A Martini. I must remember that one.

Now here’s a thought: Doctor Who generally steers away from advocating for alcohol. Is this a first?

The Doctor, of course, rescues Jack. Mostly to show off, naturally.

The Doctor and Rose dance to finish out.

Not sure I approve of the Tardis lights being a cheap disco, mind. But the end of this story is so joyous, I’ll let it pass. This time.

Yeah, this is great. Steven Moffat gets a lot of criticism for his own showrunner tendencies and some of his later plot choices, but he can write amazing dialogue, and when he’s on point, he’s almost unmatched in new Who.

Time to rank the episodes of Series 1:

I came so, so close to unseating Dalek, and as I noted in my review of The Empty Child, it gets the nod for being self-contained in a single story. The Doctor Dances justifies its extra time, to be sure, and it’s a can’t-miss story that I honestly left way too long between watches. It’s astonishingly good Doctor Who, and great TV by any measure.

Next time: The Slitheen are back. Dammit. And I was in such a good mood.