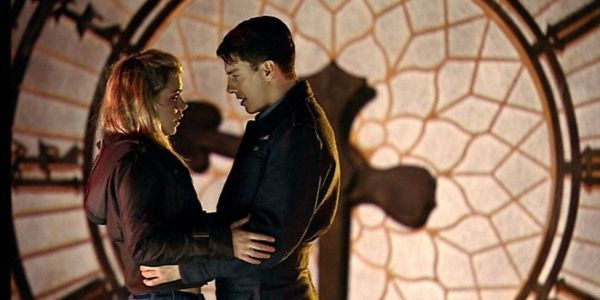 A story that rests on one very simple question…

Yes, it’s about time — well, it’s really past time — that I got back to reviewing episodes of Doctor Who. I’m doing this to fill the gap between seasons, because the BBC doesn’t like me or something and keeps putting HUGE GAPS BETWEEN DOCTOR WHO SEASONS.

Not that this makes me tense, or anything.

As always, these are totally a stream-of-consciousness matter written as I’m watching and only lightly modified by jiggling a sonic screwdriver in front of them to deal with any pesky spelling errors.

Also, and while it’s unlikely for a show that first aired back in 2005, I hate the idea that anyone might have anything spoiled, so I’ll throw in a YouTube clip as a way of providing easy-to-back-away-from spoiler space. Beyond there lurks the spoilers folks. You have been warned.

My, but it’s been a long while since I’ve watched this story. Which is very unusual, because I do recall liking it a lot.

Fun fact: The BBC synopsis for this story reads (and I swear, I’m not making this up): ” Homeless children in wartime London are terrorised by an unearthly child.”

An unearthly child, you say? That’s a good description. Somebody should use that sometime…

Straight into the action, where we find out that red alerts are apparently “camp”.

“By everyone else’s standards, red’s camp. Oh, the misunderstandings. All those red alerts, all that dancing.”

And whatever we’re chasing, it’s apparently Mauve. And about 30 seconds from the centre of London. Which means, I guess that it’s on a very specific spatial trajectory, even if it is travelling through time.

Anyone else getting the sense that it might be a Red Dwarf Garbage Pod? I mean, the Doctor hasn’t yet crossed paths with the mighty Quaagar warrior army.

Roll the credits! I still get a weird nostalgic vibe watching the “old” Doctor Who credits, if only because at the time, having been a fan of the show during the off-air decades, it seemed so miraculous that it was back at all.

Hmm. Maybe that’s why I’m so tetchy about it not being on air. Good word, tetchy. The first Doctor would definitely approve of the word tetchy.

The Empty Child, by Steven Moffatt. Whatever happened to him?

We land on a darkened set, or possibly a street somewhere in Cardiff London. The Doctor and Rose are being watched, and Rose isn’t happy about the Doctor’s low-tech approach. She wants more “Spock”.

A voice cries out for its mummy. It’s probably nothing.

Except that it’s a child in a gas mask. A disturbing image at any time, and of course the ONE thing that EVERYONE who has seen this two-parter remembers. I cannot go past a gas mask in a museum, ever, without asking if it’s my mummy. You’re probably the same!

The maternal instinct in Rose is strong, as she goes chasing after the child.

Looking at Jackie, it’s arguably hard to see where she gets it from.

The Doctor very awkwardly asks if anything has fallen from the sky recently. And it’s brilliant and dark and funny all at once, which is testament not only to the writing, but also Christopher Eccleston’s comic timing and delivery. It’s a world away from terrible Slitheen fart gags.

In order to reach the child, Rose is climbing a rope from nowhere, badly. She’s an idiot. So of course, it’s tied to a barrage balloon, and it goes floating off with Rose in tow.

The green screen of Rose is not great. Like, 70s era not great. London looks nice being bombed, mind.
(what, too soon?)

Without a companion, the Doctor finds an alley cat and talks to it. I knew I liked him for a reason!

ALLEY CAT FOR NEW COMPANION! It’s never been tried before!

Ahem. Rose is, I’m sure, fine. Just, you know, floating above London during the Blitz and all.

The Tardis phone rings! It’s such an obvious gag, and yet before now… not used all that much. And it’s leading to the inevitable line on which this entire story rests.

Wow. Even just typing that feels creepy. But in the best kind of behind-the-sofa-but-can’t-stop-watching kind of way.

What’s amazing here is how a very simple premise is quite worthy of two episodes. If you do know the resolution, you boil it down and it’s rather thin. But the presentation, the style and the delivery mean that it’s never anything but utterly gripping.

The girl we saw earlier – still unnamed at this point- is robbing the house. I guess a lot of this kind of thing must have gone on in WW2, with, of course, plenty of risk.

Quite a lavish spread for WW2. Either they’re very wealthy, or rationing isn’t in yet.

Ah, an off-hand remark about the black market to cover why they have so much food. Nice enough, I guess, although they didn’t seem to look or act like folks who might have been wealthy enough to afford that much food for what, a family of four?

Rose finally remembers that gravity and rope burns exist, so she falls… and is captured by a blue sky beam. It’s Captain Jack to the rescue.

A joke about switching off your cell phone confirms that this was shot in 2005.

“I’m hanging in the sky in the middle of a German air raid with a Union Jack across my chest, but hey! My mobile phone’s off!”

Rose floats down, but somehow “lands” in Captain Jack’s arms. You might want a quick dip in the disinfectant afterwards, Rose m’dear. Who knows where he’s been? Actually, even Who might not know…

Captain Jack takes her to bed. Ahem. I mean, he puts her to bed. Stop thinking what you’re thinking there! You can start thinking it when I’m done thinking it. Anyway, I’m sure there’s plenty of fanfic of that kind of thing “out there” if you know what I mean.

We cut back to the now-named Nancy, who is feeding a flock of street urchins… and the Doctor. It’s a fun reveal, even if it’s entirely impossible that he would have ended up in the meat queue without being spotted. He’s at least twice the size of anyone there!

“It’s brilliant. I’m not sure if it’s Marxism in action or a West End musical!”

Again, I agree with the Doctor. Nancy would be an excellent companion. Just… a thought.

Nancy knows something, but she won’t quite say what it is. And then suddenly, at the door.

Great jump scare. I mean, I jumped. I’m not proud, but there it is.

Apparently we shouldn’t touch the child. Not because of boy germs, but because he’s empty. Somehow. An.. Empty Child, if you will.

It’s only now occurring to me, more than halfway through the episode that the score feels very classic Who. Like something Dudley Simpson would have scored back in the day.

We cross back to Rose and Captain Jack, who are flirting. It’s kind of delightful, because John Barrowman is still finding the character, and he’s not quite good in intent, which works so very well.

Nanogenes repair Rose’s rope burns. There’s a Captain Jack joke there somewhere, but I’m clearly too classy to make it.

Back to the Doctor and Nancy, and she tells him that he should “go visit the Doctor”. Yeah, I too wondered if they were going to spring a surprise McCoy or McGann appearance on us. That being said, Richard Wilson as Doctor Constantine is rather brilliant.

The Albion hospital has a nice Silent Hill vibe to it. Room after room full of folks in gas masks adds to the atmosphere.

This isn’t exactly an expensive-looking story, but it totally doesn’t need to be. Darkness envelops it, and while it means you don’t have to spend quite so much on props or scene dressings, it also makes for a wonderful atmosphere.

I like Doctor Constantine, but I’m puzzled by something. Not the reason why he hasn’t come down with the gas mask zombie plague before, even though it means he’s basically here to provide narrative.

No, it’s the fact that he watches the Doctor scan patients with the Sonic Screwdriver and never ONCE asks what the heck it is! He just accepts that the Doctor is somehow getting his diagnosis with it, and moves on with the story.

Once again, we’re back to Nancy, although it’s not entirely clear how Doctor Constantine knows her. But her brother is — or was — in Room 802, and was the first victim. The plot thickens!

OK, the plot isn’t that hefty to begin with. It… coalesces a bit. Doesn’t matter, because this is superb.

We get the “A” and “B” plots converging almost immediately, as Captain Jack’s scheme comes undone thanks to… him admitting to it almost immediately. It’s weird, because there wasn’t too much reason for him to do so, beyond perhaps being a bit creeped out by the Gas Mask Zombies. A very rapid face turn there.

Back to Nancy, who went back to the house to steal more food. But a small boy in a gas mask is waiting for her.

The shot of just the feet is creepy too. And of course if you’re a parent the voice of a small boy doesn’t help any.

Nancy is trapped. The Doctor, Rose and Captain Jack are trapped. Can anyone save them?

A great episode that hangs on a very thin plot, but works nonetheless and hasn’t lost a single step with age. Of course, I’m going to watch the second part almost immediately, because why wouldn’t you?

But before I do, it’s time to

It is so very close at the top of the table. Honestly, Dalek only just edges out The Empty Child in my estimation because it folds together so well as a single episode story, where The Empty Child/The Doctor Dances enjoys its longer run time. On a single episode basis, then, it just doesn’t quite take the top spot, but it looks better than Father’s Day (where the effects have aged poorly).

Still, it’s testament to my conviction that the Eccleston series gets short shrift amongst Doctor Who fans for little more reason than the fact that David Tennant hasn’t taken up the role, and that’s unfair. There are some truly great episodes here, and The Empty Child is one of the very best.

Next time (which I’m lining up as I type this): The Doctor Dances