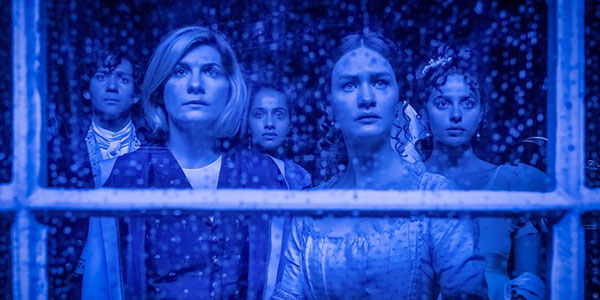 The Doctor, some ghosts-that-maybe-aren’t-ghosts and more in my spoiler-filled review of the latest episode of Doctor Who.

We’re racing towards the end of the season, and that means that the season ending two-parter is nearly here. But before that, we’ve got a haunting to get through.

However, as I hate spoilers, I’m giving you early space to back out now on the chance that you haven’t yet watched The Haunting Of Villa Diodati. Below the YouTube video lurks a haunting… and a lot of spoilers.

It feels astonishingly fitting that a story that’s essentially about classic writer should start on one of the all-time classic clichés. It is literally a dark and stormy night as The Haunting Of Villa Diodati begins, and we’re introduced to an all-star writing cast, including Lord Bryon and Mary Shelley in a suitably dark mansion on the shores of Lake Geneva.

The Haunting Of Villa Diodati isn’t afraid to trade in clichés, including a nearly endless procession of jump scares, but it gets away with them by simply being good at them.

There’s not much doubt in the viewer’s mind that the very first jump scare would be The Doctor and Yaz, Ryan and Graham, although I’m still a little bit puzzled as to why the house’s inhabitants couldn’t see them through what were very clearly glass doors.

From there, the classic haunted house clichés pile on, from candles that extinguish at just the wrong moment, staircases to nowhere and bones that animate by themselves for reasons I’m still not 100% clear on. What carries it is both the direction (especially the lighting) and the quality of the acting on offer.

Jacob Collins Levy is absolutely perfect as a witty-but-distinctly sleazy Lord Byron, Lili Miller provides an excellent take on the presumed role but also inquiring mind of Mary Shelley, and while he’s largely comic relief (albeit in a dark way), Maxim Baldry’s Dr Polidori also gives us societal context — and very nearly a duel. Although it strikes me if there’s anyone who shouldn’t be involved in pistol duelling, it’s Ryan.

If you want a good indicator of just how good The Haunting Of Villa Diodati is, consider this: More than half the run time of the story is actually little more than a classic Doctor Who corridor chase.

It’s just that it’s the same corridors wrapping on themselves thanks to Shelley’s perception filter sending everyone randomly around the house, a spell that’s only broken by Dr Polidari’s sleepwalking — because of course he’s not perceiving the world the right way anyway!

The actual narrative really only picks up once the semi-complete Cyberman Ashad comes in from the shore. I’ve long had a bit of a problem with semi-complete Cybermen, because part of the creepy factor is meant to be that absence of actual human features, and if you take it too far you get… well… Cyberwoman.

By placing it in the subtext of Frankenstein, however, The Haunting Of Villa Diodati gets away with it, and even with a little light quoting from Mary Shelley herself. The modern prometheus, indeed!

I’m also immensely pleased to see a story that sticks to an idea I feel like I’ve been barking on about for ages with Doctor Who. There’s nothing wrong with using the classic villains, and if done right, they can offer a lot of threat in sole settings. It’s why Dalek works so very well with one Dalek but the millions in The Parting Of The Ways are less effective. Here, it’s the fact that one Cyberman back in 1816 is way more than enough threat by itself, both to the inhabitants and the future itself.

The matter of teleporting Ashad-Cyberman around, and his on-again-off-again power levels do deflate his threat a little, and it’s never entirely clear just how complete his transformation is, but he’s still a sufficient threat for everyone to get concerned.

Especially given the Doctor’s conceit to save the life of Lewis Rainer’s Percy Shelley at the potential cost of… well… the future.

This is where I’m going to have to at least partially play the same game I played with Spyfall Part One and Spyfall Part Two, because quite how much of a problem giving the Cyberium to the lone Cyberman actually is.

What I can’t help but think of is that 95 years later, Tom Baker’s Doctor will be facing the exact same problem in Pyramids of Mars; if Sutekh isn’t defeated, he demonstrates absolutely that Sarah Jane Smith’s 1980 (let’s not get into wacky UNIT dating problems here, work with me) simply won’t exist.

I’m not sure how this is any different — but I’m very keen to find out.

And with that out of the way, it’s time once again to…

Yeah, I went there. Now, I do reserve the right to flip that down a notch or two on the table depending on how the aftermath of handing over the Cyberium plays out in the series ending two-parter, but this was good, enjoyable, well acted and directed Doctor Who. I really can’t ask for more than that.

Next time: Ascension Of The Cybermen. I’m guessing that this one might just have Cybermen in it.

3 thoughts on “Doctor Who: The Haunting Of Villa Diodati review”