Posted in Reviews
Author: Alex  Published Date: February 13, 2020  Leave a Comment on Doctor Who: Can You Hear Me? Review 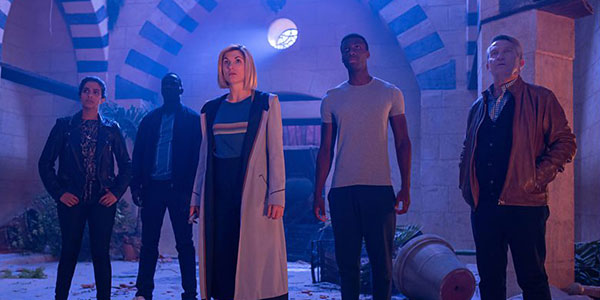 A little later than usual thanks to power outages, but the good Doctor has been haunting my dreams nonetheless.

It turns out it’s rather tricky to write Doctor Who reviews if you both can’t power up your computer or indeed some other kind of screen to actually watch the latest episodes on! But, before I get into the review, my traditional spoiler space, so that if you haven’t yet seen Can You Hear Me? you can back out now. Past the YouTube embed be spoilers, folks…

Can You Hear Me? in many ways treads very familiar ground for Doctor Who. It’s a classic “creepy” episode that almost feels like a throwback to the Philip Hinchcliffe era of the show in the way that it very deliberately used lighting, music and shot selection to set the mood, in fact. It’s the tale of two gods, essentially speaking, and Doctor Who has shown that it’s not afraid to have its own celestial cast in the past. Indeed, Can You Hear Me? even lampshades that concept by deliberately namedropping the Eternals and the Celestial Toymaker, which was a lovely touch.

However, the business of dealing with Zellin and Rakaya isn’t, I’d say, really what Can You Hear Me? is all about. This is an episode that’s intended to be very strong on character development, as long as you’re a member of the regular cast. Everyone gets their chance to flex their acting muscles… with varying levels of success, although this isn’t always their fault.

Ryan gets some nice backstory and a chance to expand by exploring the world he’s left behind through the prism of the experience of his friend Tibo, and the effect that Zellin is having on his sanity. It’s a nicely observed bit of both writing and performance from both actors, because it comes across as quite genuine.

Slightly less effective is Yaz’s story this week, and for me that rests on this rather odd idea that she and her sister are noting a particular “anniversary”. At first — and I suspect I’m not alone in this — I thought it might be the death of Yaz’s grandma that we met in Demons Of The Punjab — but instead it was… the anniversary of her running away?

Like I said, an odd thing to commemorate, and tonally a little weird because actually I think the way that the story expands on Yaz’s teenage drama and the whole matter of the police officer and the 50p is quite lovely. It’s just the setup that’s clunky.

And then we have Graham, and his quite understandable fears about his cancer returning, magnified by the feelings of loss he still has for Grace. That part works well, but then there’s the whole somewhat controversial matter of his discussion with The Doctor around the possible return of his cancer.

I can’t quite decide where I sit on this one, and I know it’s been a “big thing” in Doctor Who fandom this week.

I get the perspective that it’s a bit of a cop-out in writing terms and maybe not in line with The Doctor’s established character to date.

Equally though, I get that The Doctor is an alien being still trying to come to grips with Gallifrey burning, and that the prospect of also losing a companion might be a little raw for her to handle. It’s certainly not the best dialog to have to deliver, certainly.

Ultimately, though, it’s the moments where each companion has to face their fears, and we get just a teensy bit more insight into what frightens The Doctor that works well in this particular story.

That does leave the actual villains of the story almost as a bit of an afterthought, which isn’t great when you’re talking immortal and highly powerful beings. The concept of getting The Doctor to do your dirty work to help your partner escape is nice, but after that they head to earth to… wander the streets at night?

It’s also a touch deflating to have The Doctor essentially hand wave the solution of trapping them again rather quickly. If it was that easy, how did she get captured in the first place?

Still, and enjoyable bit of creepy TV, and anything that gets me further away from Orphan 55 gets the tick of approval from me.

With that out of the way, time to…

This was a slightly tough one to absolutely place; I think it sets a mood that I like a little more than Fugitive Of The Judoon, but I can’t ignore just how significant that story is likely to be in terms of overall Doctor Who canon.

Next time: The grim themes continue with The Haunting of Villa Diodati!