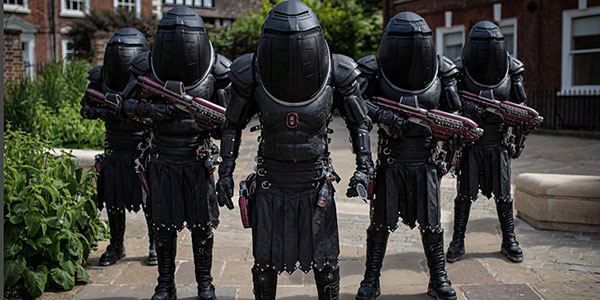 Spoiler: Contains Judoon. Also my spoiler-heavy thoughts on the fifth episode of the latest episode of Doctor Who.

There’s a very great deal to unpack in this week’s episode, but as is customary around these parts, I like to provide some spoiler space, so that if you’ve landed here before seeing Fugitive Of The Judoon, you can gracefully back out. Beyond the YouTube embed lie spoilers. And also Judoon, but given they’re in the title that’s not much of a spoiler.

Wow. There really was a lot in that episode to unpack, as well as an awful lot of foreshadowing for what’s going to take place in the final four episodes of the series. Or maybe the next couple of series, I guess, but you know what I mean.

So in order to break the tension, I’m going to break up my thoughts on Fugitive Of The Judoon with a selection of classic gags from the Big Book Of Judoon Jokes (“Bo Bo Sho Fo Ho Ho Ho” in the original Judoonese).

Q:What weapon did the Judoon Military Commander use on the primitive planet?
A: A Bo.

From the trailers, you could be forgiven for thinking that Fugitive Of The Judoon would just be another self-contained episode in classic Doctor Who style. That’s not the case of course, with the Fugitive being “The Doctor” — a mystery to be solved — as well as the return of a character who’s effectively a “classic” character, given we’ve not seen Captain Jack in mainstream Doctor Who for a decade now.

I’ll be honest; my reaction to seeing John Barrowman — well, hearing him at first, but that’s a very distinctive fake American accent — was to cheer, because it’s been such a long time. The powers that be certainly did a good job of keeping what amounts to a cameo quiet, and I appreciate that, because it would have had so much less impact if I knew it was coming. Feels like something of a copout not to have Captain Jack actually meet the new Doctor, even if the scenes with Graham and Yaz were a lot of fun.

Q:Which professional wrestler is the Judoon’s favourite?
A: Samoa Joe (Joe Joe Joe)
(Joke credit: She knows who she is. Not my joke.)

What I did appreciate in Fugitive Of The Judoon was that while it did a lot of legwork for setting the story arc for the season, it didn’t feel the need to beat us over the head with the fact that it was a mystery in the same way that Spyfall — and especially Spyfall Part One — did.

Instead, the story evolves slowly, leaving the mystery of the fugitive mostly open the entire way through.

Q:How does Steve The Judoon whistle?
A: He just puts his lips together and… Blos.

Now, there is one issue here for much newer Who fans, and that’s the fact that beyond Captain Jack, there’s a lot of callbacks in this episode. Unless you remember the Chameleon Arch (from “Family of Blood” of course and later “Utopia”), then the reveal that Ruth is in fact a Time Lord — and a very specific Time Lord if the story’s primary narrative is reliable. Again, we’ll have to wait and see how that plays out.

Q:Why did the Judoon Military Commander water her crops?
A: Because she wanted them to Gro.

As with last week’s Nikola Tesla’s Night Of Terror, the quality of the story rests not just on the story but also on the performances of the actors within, and there’s plenty of credit to hand around. The transformation of Jo Martin’s Ruth into The Doctor, and the way she handles everything from Venusian Akido (which clearly works on the Judoon) to her change not only of costume but also of tone and body language is handled masterfully. I’d totally watch a series of Doctor Who with her as the Doctor — presuming that she is indeed The Doctor at all.

Q: Why don’t the Judoon like holidaying on the Ood planet?
A: Too much… sno.

Equal plaudits, though, for Jodie Whittaker, who finally gets some scenes with material she can really chew on as an actor, facing up to the double whammy of meeting, well, herself and the return of both Captain Jack and Gallifrey in one fell swoop. Again, at least as far as we know. The emotion writ large on Whittaker’s face looking out over a ruined Gallifrey, and her speeches to the Tardis crew are just exemplary.

Q: Why are the Judoon big Captain Jack Harkness fans?
A: Because he’s the face of… Boe.

The heavy lifting by Whittaker and Martin does reduce the roles for Ryan, Graham and Yaz to much more supporting roles, not entirely helped by them being whisked around to wherever the plot needs them to go.

I was slightly worried that Captain Jack’s magical time scoop — my better half suggests it might have come his way via Gallifrey’s Death Zone, which would fit with how accurate it wasn’t — would magically “return” the Tardis crew straight to The Doctor, but that would have utterly muddled the reveal scenes for the new Doctor.

Ultimately split — because I have to be — on just how good Fugitive Of The Judoon actually is. It’s wildly enjoyable in itself, but a lot of it does rest on where the story goes from here. Which was much the same story as with Spyfall Part One, but the quality acting and even the more relaxed direction not beating me over the head with the fact that there’s an underlying mystery leaves me wanting more. Much more, in fact.

And now the tricky task of…

Ranking the episodes of Season 12 of Doctor Who!

Fugitive Of The Judoon was way more enjoyable than I thought it would be based on the trailer. Still, I’ll put Tesla ahead of it (for now) because that story stands on its own feet, whereas the real effective story telling behind Fugitive won’t be known until the rest of the series concludes — or however long it takes for the story to unfold. I may revise that ranking later on.

Next week: Praxeus. Whatever that is, unfolding all around the globe!

1 thought on “Doctor Who: Fugitive Of The Judoon Review”