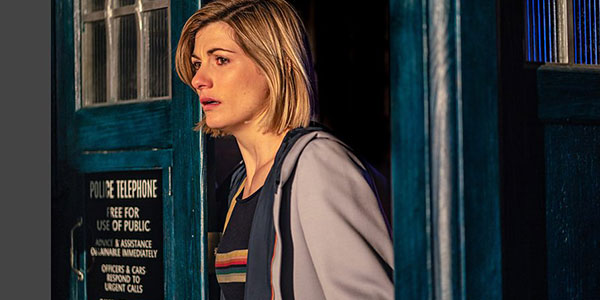 My spoiler-heavy review of the second episode of season 12 of Doctor Who awaits. It’s about time.

Once again, I have to stress that my review will contain spoilers for Doctor Who: Spyfall Part Two, so if you’ve not watched it, now is the time to back out gracefully. Go further than the embedded video below and it’s on your own head. Or heads, if you have multiple, I guess.

Hey, if we’re going to go with spies, I may as well go for the right kind of theme tune, right?

I commented in my review of Spyfall Part One that a lot of the weight rested on how the second part concluded matters. The good news here is that Chris Chibnall mostly resolves the larger dangling plot issues that the first part set up, and what’s more, he does so in a format that actually gives the action more than a little time to breathe and enjoy itself.

Which means it’s less about constantly mentioning “spies” and expecting us to get all excited just because, and more about giving the actors something to work with.

Sure, there’s some contrivance here — The Doctor’s plan to save Ryan, Yaz and Graham rests on the idea that Ryan will drop behind specific seats on a tumbling plane, and that nobody who flew on the plane before noticed the weird metal plates or erroneous safety card — but it at least serves the ongoing narrative.

It’s also a story a nicely uses the concepts of time travel in a way that relatively few Doctor Who stories actually do, which is unusual when you consider the core concept behind the series.

I picked almost immediately that if The Doctor was meeting someone called Ada from Victorian times that it would be Ada Lovelace, and I’m sure I wasn’t the only one. Quite why that mattered was allowed to unravel at its own pace, though, which was nicely handled.

Equally, there was some smart plotting that left you wondering just long enough to be resolved. One of my family members noted that the Nazis probably wouldn’t have taken orders from a Master that looked like Sacha Dhawan, and I commented that he was always rather good at hypnosis. About a minute later, the alternative — a perception filter was being used — got introduced, and it also got paid off when The Doctor disabled it.

Lenny Henry somehow got more evil this episode too, offing his own mother rather than rewriting her DNA. I’m very much here for evil Lenny Henry, and the episode’s themes of privacy and the quantity of data we hand private companies was very nicely handled in his speech prior to the whole 3 minute warning text being sent out.

Also, of course we got more payoff — maybe not enough, but again we’ll have to wait and see — to the whole “everything you know is a lie” line, with this season’s arc plot clearly being whatever dark secret lies at the heart of Time Lord history.

Now, I have no insight into what’s been plotted, but I’m a little averse to diving down that particular well, especially if they’re going to go for the “twist” that it relates directly to The Doctor’s history. A huge part of the appeal of the character is that underlying mystery, and you’re absolutely and totally never going to satisfy every fan no matter what you create there. But I’m happy enough to wait and see there.

Still, overall I had more fun with Spyfall Part Two, and I think it did pace itself and explain itself far better than part one.

Other smaller observations and thoughts:

And with more than one episode down, I can now more formally…

That’s no surprise, right? Now, they are two parts of the one story, so I strongly suspect that while the ordering might change a tad as the season progresses — and I do hope that they don’t go downhill from here — that the two parts will stick together in the ordering. We’ll have to wait and see.

Next time: A spa, and a claw that looks worryingly Slitheen to my eyes. I seriously hope I’m wrong.