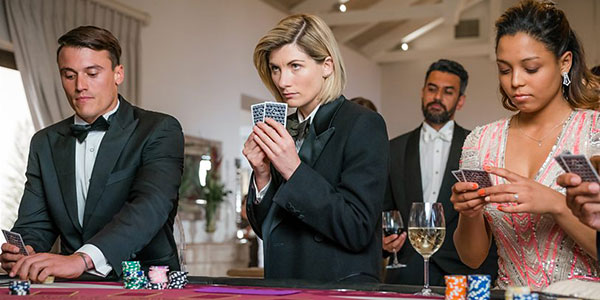 The Doctor is back for season 12 in a New Year’s Day special two-part story, and here’s my early thoughts. Spoilers lurk within!

As I usually do, I’ll leave a little spoiler space here, because I firmly believe that it’s a terrible thing to spoil a show or movie (or any bit of entertainment, really) for anyone. My review is CHOCK-FULL of spoilers, so if you go beyond the video before seeing Episode 1 of Season 12, on your own head be it.

However, unlike previous years, I’m not doing this as a by-the-minute stream of consciousness. I watched Spyfall: Part One a fair few hours ago, and while it’s also running in the background while I write this, I wanted to write a more “complete” review.

Of course, that’s a rather difficult task when you’re faced with only the first part of a two-part story, because that second part could entirely redeem or doom what the first part sets up.

That being said, while I’m more than delighted to see Doctor Who back on my TV screen… I didn’t particularly like Spyfall Part One all that much.

For a story that runs a full hour, and of course has another episode to come, it felt like it had a lot of conceptual weight crammed into its 60 minutes that it didn’t quite back up with the actual on-screen action.

I’ve written before how I don’t mind the ensemble cast idea for Doctor Who, and I’m generally enjoying the adventures of Graham, Ryan and Yaz alongside Jodie Whittaker’s Doctor, but this episode really felt to me like it sidelined the Doctor in favour of just about… well, everyone, really. She’s there to provide tech explanations of what’s going on, but the story is largely told through the lens of the companions, with just about every spy cliché thrown in as well.

Which in itself isn’t necessarily a bad thing. Doctor Who has had its James Bond moments before — most obviously in the way that many of Jon Pertwee’s classic stories were staged — but the involved cast really isn’t given much of a chance to breathe before the next crisis emerges that they have to react to. It lowers the stakes and makes it feel all rather silly, and I can’t help but wonder if it’s not a few old M.I. High scripts stitched together to save money.

The whole scene with the car being taken over is a good early example. Puts the whole crew in peril, but then it’s not really clear why the aliens, who could have laser-killed anyone in the vehicle didn’t do that instead of rolling it backwards through traffic. So many chances to kill The Doctor… and so many misses, because that’s where the story needs to get to.

As an aside, it was interesting to see the BBC play both its Stephen Fry and Lenny Henry cards with this story; that’s a lot of UK-centric star power to throw at the show. Well, it is with Lenny, but much less so with Stephen Fry. I’ll pay the Doctor gender misidentification gag here, but it also doesn’t help that Fry is both the voice of Dangermouse’s Colonel K and that his appearance is essentially just that of a cameo.

It’s also a cameo that seems to brush over a LOT of important information. Why doesn’t C know that UNIT’s been disbanded? Why does he get shot by a sniper that we never see, only to have the aliens merge in through the walls anyway? Again and again, this story takes you on a rollercoaster ride promising a payoff that we don’t get… at least, for now.

Again, I have to temper that with the fact that there’s a second part to come, but again Chris Chibnall’s script can’t help but decide to rest on twists and turns, not all of which feel earned, ultimately. He seems to think that the viewers will simply get excited if you keep saying “spies!” over and over again, and while you could plot out a good Doctor Story around espionage, you’d need to give it more breathing time than you get here.

That’s also true for the story’s main “twist”, which is the return of The Master. Sacha Dhawan does appear to have the acting chops to carry off a nicely devious take on The Master, but it just feels like stacking up “surprises” for the sake of it, without providing much in the way of context.

Sure, I don’t want Chris Chibnall’s script to drop too many hints, but even one of them would have been nice, and it’s a genuinely weird idea to have The Master join MI6 in order to lurk there for years because… he could?

The Master’s ambition has always run much further than just Earth, and that may be apparent in the whole “everything you know is a lie” line, but that’s again a chunk of dialog that doesn’t entirely feel earned. And that’s without even getting into the whole Master/Missy redemption arc, which I’m guessing is either being ignored or outright retconned!

So for now, Spyfall Part One was fun, because it’s Doctor Who and I do like Doctor Who, but it doesn’t feel like a strong or confident start to the series.

At least not yet. We’ll have to wait and see.

Other smaller observations and thoughts: