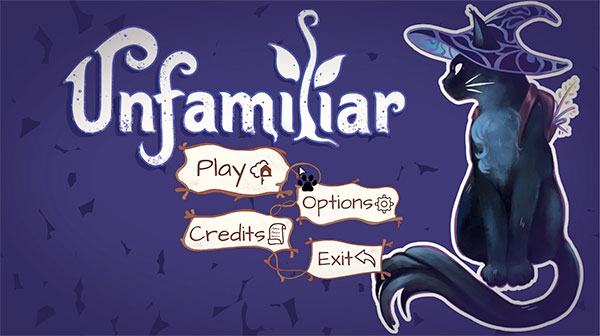 A delightfully whimsical Australian-produced game about a magical cat that’s great to simply relax with.

Plenty of games are all about that pew-pew action, blowing apart as many opponents into meaty chunks as you can manage.

That’s totally not what Unfamiliar is about.

If anything, it’s about that purr-purr action instead.

I first came across Unfamiliar at PAX AUS (you can read my writeup here), and I was kicking myself at the time for not picking up a copy.

So of course, life intervened and (I’ll be honest here) I completely forgot about it, until it came up in a Twitter conversation recently, and I grabbed a copy to give the retail version a run-through. Or in this case, a gently-padded paw through…

Unfamiliar casts you in the role of Yew, a magical cat — technically a witch-cat according to the game’s brief blurb — exploring magical worlds to collect magical ingredients in order to craft new items, costumes and access additional levels as you go.

The key thing to know about Unfamiliar is that it’s a game that deliberately leaves the meaning and challenge up to you. There are no fail states, no health bar, no combat and only the very lightest of puzzling, usually centred around finding and interacting with onscreen elements along the guided paths that make up the game’s storybook worlds.

I can totally see some folks not getting that particular motif — and that’s fine, you do you — but what that leaves you with is a game that’s just beautifully relaxing, especially if you’re a cat person.

The ability to adorn Yew with all manner of costumes, collars, backpacks and even different fur designs gives the game much of its charm, but it’s also just fun to watch Yew meander, run, jump and purr around the game’s levels.

While I’m a noted sucker for cat games generally, I also appreciate that Yew isn’t your standard kawaii-style videogame cat, with more of a focus on a realistic look that gives Yew a lot of personality and charm. The game’s worlds are rather more starkly designed, but that feels like more of a deliberate choice both to accentuate your focus on Yew and make it clear that you’re living in a fantasy world to begin with.

It’s a relatively short experience (unless there’s some very esoteric puzzles here to unlock further content I’ve not yet uncovered) but then I’ve long held that I’d rather have a good short experience than one that’s just padded to meet some arbitrary play time constraint.

There are some areas that could use a little tightening — the lack of explanation of areas and controls can leave you a little befuddled at first, and it’s a game that definitely benefits from using a gamepad — and it’s certainly not going to appeal to gamers looking for a strict “challenge” type game. There’s also a certain amount of backtracking needed for some ingredients that only seem to crop up on given levels. Also, I don’t think I’ve collected this many fluffy balls in a game since the last time I played Bubsy.

But as a relaxing experience, and certainly at the quite affordable price point developers Mana Tea games have put on it, it’s excellent.

Unfamiliar is available for PC via Steam now.