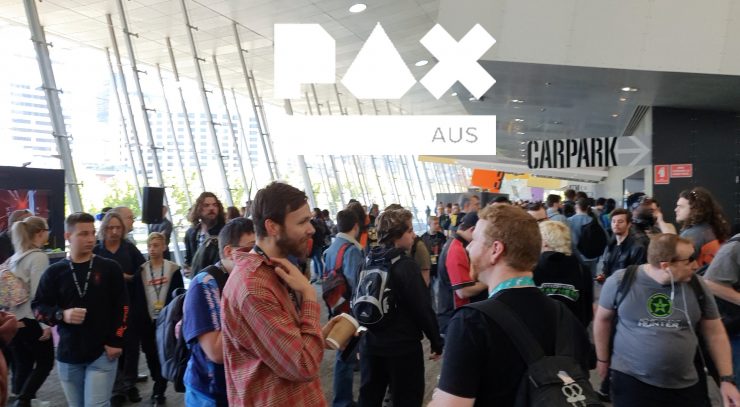 So I finally managed to get down to Melbourne for PAX AUS, for a weekend filled with games, gaming culture, killer sheep and plenty of good-spirited competition.

Each year since PAX AUS was a thing, I’d wanted to make it down to Melbourne to have a look around, but various factors (usually known as “real world problems intervening”) meant that it just didn’t work out.

Now, if you’re reading this you’re probably aware of what PAX AUS actually is, but for the less informed, it’s a multi-day gaming conference/exhibition, filled with new and upcoming games, panels around gaming culture, more cosplayers than you can swing a foam sword at and thousands upon thousands of generally very friendly, patient and excited gamers. My kind of people, really.

Again, that ain’t news. So what did I think?

Well, like most big conferences, you really have to choose what kind of PAX you’re going to have, because it’s essentially impossible to do everything.

If you’re into gaming panels — and there were plenty of those — you dedicate your time to that. If boardgaming is your thing, there’s plenty of space, supplied games and friendly folk willing to roll a die or flip a card along with you. If cosplay is your jam, you’ll be amongst plenty of like-minded folk. I saw some amazing, creative, funny and smart cosplays wandering around, and again, everyone seemed pretty respectful of their personal space, and they were likewise pretty careful with their props and the space of others.

There were plenty of AAA titles to line up to play if you wanted an early go on some of this year’s biggest games too.

I was only there for a day, and basically… I did none of that stuff.

So what did I do?

Yeah, I know, you’re shocked beyond words that I might have an interest in retro gaming. The classic gaming area at PAX AUS has been running for a number of years now, helped out by folks such as AusRetrogamer, Weird & Retro, Press Play on Tape, Bartronica.. and I’m undoubtedly forgetting plenty of other fine folk who helped make it all happen too. Please don’t throw unwanted N-Gages at me.

What was great here was not only the chance to get hands-on with a few systems I’d never actually used — I can no longer claim to have never played a Jaguar game, for example — but also to catch up and chat with a whole bunch of folks who I’d chatted with only over social media.

I finally got to meet Alex “Austretrogamer” Boz, for example. He’s a great guy online — and even nicer in person!

Equally, there were games to play and competitions to win. Which I didn’t but I had fun playing Downfall on an Atari Jaguar, and some rather taxing Super Mario World levels too!

I wasn’t the only one enjoying the delights of retro gaming, however. I did a walkthrough video for Facebook a little later in the day:

It’s not all AAA games

But it wasn’t all retro gaming all day for me. With Vertical Hold to produce, I also wanted to sample some of the more locally-produced gaming fare on offer, so I headed over to the PAX Rising area to check out some local games action.

But before I do note on that very good work, I was also super impressed with some of the disability supports on show all through PAX 2019. Not just the chillout areas, but also the general attitude of every single attendee I saw towards folks who might find an event like that more tricky than most. I saw more than a few folks in wheelchairs, and they were all given the space they needed (at least while I was looking) to get around without hindrance, or without the complaining that you sometimes see when people have to move out of the way. Great stuff!

Of course, we also produced a podcast, which you should totally subscribe to, as well as listening to below:

A huge thanks again to Alex Walker from Kotaku Australia, Fergus Halliday from PC World Australia and Nic Healey from ABC Radio for taking time out of their busy schedules to join us live from the show floor!

Now, if you’re curious about some of the games mentioned in the show, I did take a few snaps. Especially of those crucial cat-themed games…

I had some great discussions with developers about their plans and hopes, and I walked away quite impressed with the optimism present in the local games development scene. I by no means imagine that it’s easy — it’s a hard slog no doubt — but with new platforms to publish on and a range of game ideas that flipped from the standard to the right-out-there-what-did-I-just-play-give-me-MORE, it felt like the local games development scene was in good hands.

I had a heck of a time, even if my feet are paying for it right now. It wasn’t just the chance to play games, or indeed see upcoming titles. I could easily have spent the entire day watching panel discussions and debates, or checking out the astonishing cosplay ideas on display.

No, ultimately it was the fun of playing games surrounded by many, many likeminded people. This may have been my first PAX AUS, but it won’t be my last.