Posted in Reviews
Author: Alex  Published Date: February 24, 2020  Leave a Comment on Doctor Who: Ascension of The Cybermen Review 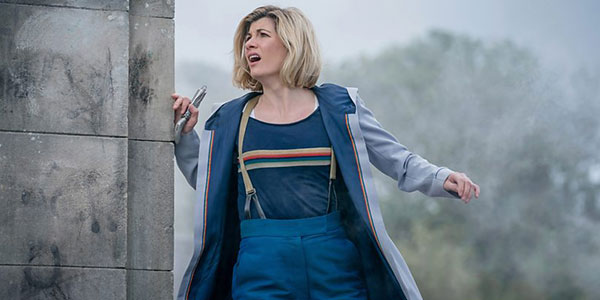 It’s season finale time — read on for my review of part one of the end of Season 12 of Doctor Who! Contains traces of spoilers — and some Cybermen.

As always with these things, I hate spoilers.

I hate the idea of spoiling anything for anyone. Every once in a while, I’ll find a reader who gets annoyed reading a review of something that reveals details about that something, so take this as a warning. Read beyond the embedded YouTube video, and you will find spoilers. You have been warned.

Chris Chibnall clearly loves a mystery. That’s the only wayI can rationalise starting the series with a mystery — Spyfall part 1 and Spyfall Part 2 — and finishing it out with another.

Like Spyfall Part 1, assessing just how good Ascension of the Cybermen actually is does rather rest on how well it concludes, but I certainly can’t fault it for ambition — or for that matter packing in a whole heaping load of content to resolve.

So for a start, you’ve got the supposedly immortal Irish policeman thread. Brendan’s story does play out rather like an episode of Irish Heartbeat — is that a thing? — but with the twist of his dad and former police chief turning up, no older at all to electrocute him with headphones for some reason that will presumably be explained in the next episode. Good for building intrigue, not much good for resolving it just yet.

I don’t know, but I’m betting that this is somehow either the origin story (in part) for Cyberman Ashad, or how he keeps himself sane in a semi-Cyber-converted state.

Then in sharp contrast, you’ve got what amounts (more or less) to a rather long corridor chase featuring Cybermen, flying cyber-heads and the not-entirely-destroyed remnants of the last cyber-fleet.

That’s easily the less satisfying part of the equation, at least for now, because it’s rather simple in structure. There’s only 7 human beings left in the universe (8 as we later find out, presuming that Ko Sharmus is in fact human), but presumably not the same last remnants of humanity that were in Utopia, and they’re picked off in short order by the last cyber-fleet, mostly through its flying head troops.

Actually, I’m not sure why the Cybermen don’t simply use the flying heads to kill them all. They’re clearly not that keen on converting them, given the ones that they do kill when they could have instead used them for spare parts.

Or, in a Big Finish sense, Spare Parts.

There are some very nice moments here — I’m a sucker for a good Doctor monologue, and Jodie’s exhortation for everyone else to flee is very well handled — and the reveal that the gateway takes you through to Gallifrey is also intriguing. I’m not sure if that’s just randomly Gallifrey for now, or if it’s always been different bits of Gallifrey… or precisely what The Master is doing in all of this, either.

There are also some moments that don’t hang together quite as well. Graham’s chirpy “WE HAVE HOPE!” mantra does start to wear a little thin, especially when you consider that he’s giving his stiff upper lip speech to survivors of a long war who have just seen people they knew and loved cut down by the Cybermen. That’s not likely to engender a positive, fun-loving mood, and Graham should know better — as a cancer survivor he’d appreciate the benefits of a positive outlook but also that sometimes, you just feel glum. In this case, there’s arguably a very good case for some negativity!

I’m waiting to see something properly Machiavellian from Sacha Dhawan’s Master that will stamp his authority on the role, but he’s certainly got the impish charisma bit down pat. Given his appearance in this episode is so very brief, he gets quite a lot of that charisma across, just before those end credits roll.

Ascension of the Cybermen, more than any other episode this season outside Orphan 55 has the opportunity to change its position on the rankings ladder, because it’s so totally dependent on what the next episode actually manages to pull off. If it’s great, I just might switch it up to position 2 with the finale as the best episode. If it’s not, both could go tumbling down.

Although not as far as Orphan 55, because that is the worst.

Next time: The Timeless Children! So… Doctor Who fandom, then?