Posted in Opinion
Author: Alex  Published Date: November 15, 2021  Leave a Comment on Thoughts on Doctor Who Flux: Once, Upon Time 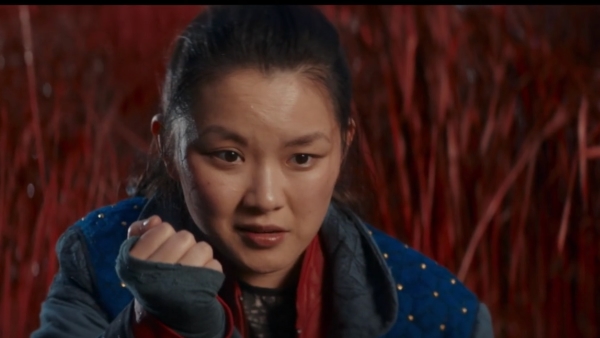 Flux moves onto its third episode, and I sure do have some thoughts on that.

However, as is traditional around these parts, I absolutely hate spoilers with a passion that would make River Song blush.

And as we all know, River Song very rarely blushes.

With that in mind, if you’ve landed here before seeing the third episode of Doctor Who: Flux, back away now. I’ll give you a little spoiler space in the form of a YouTube music clip. Lurk beyond there, and you’ll find spoilers.

Really, given this episode, there’s only one clip that will do.

This week’s episode is only PG on ABC iView, with no particular warnings. Maybe all the kids are scarred enough already?

We start, not with what’s happening to the Doctor, Yaz, Dan and Vinder, but instead with Bel’s story. I’m a sucker for a Scottish accent, so I’m instantly hooked.

Here’s the season’s contractually obligated Daleks. Got to keep the Terry Nation estate in cigars and caviar, I guess.

Bel is on a mission that… will become clear. Depending on who “her love” is, though I kinda did peg where this would end up before the episode’s conclusion. Because really, while it jumps around time, giving us a mixture of confusing detail and fan service, this episode is mostly about Vinder.

That’s 100% fine; if you’re going to introduce a potential new companion, and especially one not from modern day Earth, the more backstory the better.

Just like it jumps around the time stream (and spends quite a bit of time inside a cheap fiscally prudent kaleidoscope set), this week’s episode is highly reminiscent of The Halloween Apocalypse, with lots of clues, characters and little in the way of actual resolution of events.

Which makes it very difficult to really judge it as an episode in its own right. Sure, we get a bit of Jo Martin’s Doctor, setting up the whole Planet Time business some time in the past, and that’s nice foreshadowing… erm… preshadowing? It gets murky when you have this much time travel in a single story, or even a six parter.

Which is funny when you think about Doctor Who, a series that is literally about time travel. It’s not that there’s never been stories like this before, but most have made the actual journey comprehensible along the way.

Instead we get this snippets approach, showing off Dan and Diane’s courtship-that-isn’t-a-courtship with time jumps in-between, but again, mostly Vinder and bits of Bel’s journey towards each other.

Vinder’s story is rather predictably tragic; as soon as he’s appointed to his post as the bodyguard of the obviously corrupt “grand serpent” of his world, he’s faced with a moral conflict that he has to resolve. Snakes in charge rarely ends well.

There’s some lovely tension around the did-he-didn’t-he burial of the plot that also gives us the direct journey to his being cast aside on Outpost Rose as we’ve already seen.

It’s all a bit Quantum Leap-ish in the way that the BBC saves on actor fees has Yaz, Dan and The Doctor play the roles of other characters in Yaz and Vinder’s timestreams. Not that this is a bad thing, mind you.

I still have zero idea what’s going on with the Victorian era dude, tunnels and the rest, and clearly I’m not meant to. Which brings me to my primary criticism of the episode, and it’s this:

I wasn’t bored, but I couldn’t have followed it all, because we’re not meant to. That’s a fine storytelling device to use, but writer and show runner Chris Chibnall has already used it in the first episode.

We’re three episodes in, and it’s gotten murkier as the presumed finale on the planet Time has instead been sidestepped, placing fresh Moré — Morhey? Moray? — in the temple to restore things.

Except, you know, not. Not at all, because now we have a fresh character — villain, presumably, not named but the credits call her Awsok — telling the Doctor that the time has come for this universe to end, presumably tying into the whole “timeless child” business introduced last season.

So that’s Once, Upon Time. I enjoyed watching it, because it’s Doctor Who, and I usually do, but it needs to start actually tying details together in a satisfying way. Can Chris Chibnall stick the landing? He’s got three episodes left to do so.

Next time: Village of the Angels