Posted in Opinion
Author: Alex  Published Date: November 8, 2021  Leave a Comment on Thoughts on Doctor Who Flux: War of The Sontarans 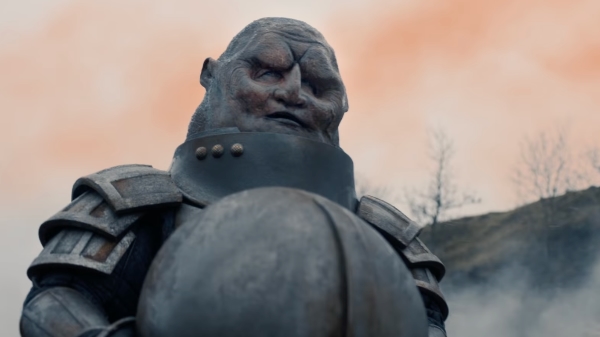 Do I have thoughts on War of The Sontarans? That is a silly question.

However, as is traditional around these parts, I hate spoilers and don’t want to inflict them on anyone, so I’ll embed a quick YouTube music video below, just on the off-chance that you’ve landed here before watching War of The Sontarans.

Or in other words, below the video, there are spoilers. And Sontarans. I don’t think that’s a spoiler.

Hey, it feels appropriate, although I don’t know what “Lycris” is either.

Immediate amusing observation, because I’m personally watching this on ABC iView, and it warns upfront of both “Horror” and “Scary Scenes”.

What on Sontar is the difference, ABC?

A quick recap for those who didn’t watch The Halloween Apocalypse (my writeup thoughts are here, if you’re keen) kicks us off, and if anything, it’s even more frenetic than the actual episode was.

The Doctor is off to the end of the universe, and it’s a slightly Escher-esque building, it seems. I don’t seem to see the restaurant anywhere, mind you.

One of the strengths of Doctor Who has long been making a lot out of a little, and they sure as hell try throughout War of The Sontarans, with a misty battlefield so you can’t see how small it is, endless CGI soldiers and Sontarans so you don’t realise there’s only about six actual actors and so on. It’s all rather well done.

Mary Seacole is wonderful, and they’ve even cast well for visual matching from the portraits of her.

And we’re off and running away from the Sontarans. For a warlike species, they’re not very flexible when it comes to their battle plans.

How does a Sontaran get up on a horse? I mean, I guess it’s the same way that ye knights of old did, little cranes and the like, but that wouldn’t accord well with the whole Sontaran sense of not looking absurd, now would it?

(Strax not included, although I do love that all the grunts are Strax clones. Saves on budget and makes 100% sense for a clone species, too!)

There’s something very video-game esque about the triangles hassling Vinder about repairs. I half expect an elf to wander in with the Master Sword any minute now.

The British Hotel is also wonderful — I do like it when Doctor Who mixes in time travel and real historical figures when they’re treated with respect — but it does feel like it’s maybe a TARDIS too. The interior set seems bigger on the inside to me…

The Flux mystery deepens as the Doctor is separated from Dan and Yaz, which gives us a solo run for Jodie’s Doctor… well, sort of anyway.

Dan being back in his home street is a nice touch, although I don’t get why his neighbours wouldn’t have let him in if it’s only been two DAYS since the Sontaran invasion. Either that, or Jim is just a crappy human being. Maybe Dan owes him five quid?

OK, one nitpick here. The Sontarans absolutely overcome with numbers, not detailed military strategy, but since when were they such terrible shots? They are not stormtroopers!

Dan’s Dad and Mam rescuing him with kitchenware and then immediately complaining at him is just so very Liverpool. I mean, sure, it’s shot somewhere in Cardiff again, but it’s nicely done. I was wrong about this one, as has been pointed out to me. Dan’s house exists, in Liverpool, for real, and Who has done some location filming. So there you go.

I don’t get the relevance of the 1820s era guy, or indeed even where he vanishes off too given everyone else ends up in the temple on “repair” duty, but that’s because this is very much an episode of two parts.

There’s the Sontaran story, which honestly could have been a standalone story any other season — probably not a strong episode, but one nonetheless — and then the continuing Flux storyline, of course.

Yaz should NOT need a WWTDT reminder on her palm after all this time. That’s just clunky in positioning and exposition, and a little out of character for Yaz too.

Not that Yazz. Yaz. See?

The General is immediately set up as a bad’n, and it’s not hard to see this going the way that the Doctor tends to with most military types.

Sontarans are unlikely to parley peacefully, even with the dangling carrot of The Doctor in play. Although I do like the whole “Mary Seacole’s assistant/Doctor is automatically male” bit.

I half expected the other side of the illusionary wall to simply be on the Sontaran home planet, but it seems to still be in Crimea. Oh well.

Commander Skaak obeys standard Sontaran logic. Surprised the injured scout isn’t melted down for nutrients, however. It’s wasteful, and I’m not sure about this whole business about shooting them from the front, either. That’s the whole point of the probic vent, right? Only weak point.

While I’m nitpicking, how do Dan’s parents know the word “probic” (but not vent). And how do they drive around Liverpool at night if there’s a full-on curfew in place?

The temple can’t be repaired, and while we get that it’s about “time”, it’s not explained further. Again, it’s kind of tough to judge this stuff without the rest of the story context, but then I have to remember that this is part 2 of a 6 parter. Look back through any long Who story and by part 2 you’re typically still only setting the scene. That’s exactly what War of The Sontarans does, albeit at a much slower pace than last week’s episode.

I do like the idea that Dan can go all Splinter Cell sneaking around due to the Sontarans’ lack of peripheral vision.

The parley between Skaak and The Doctor is nicely done, and properly in character too. Sontarans take military advantage, the Doctor protects the Earth but does not kill if it’s not absolutely necessary. Nice callback to Commander Lynx, too. Although I fear a lot of new Who fans might find The Time Warrior a tad slow.

“And also… I wanted to ride a horse!”

I’m liking Skaak more and more. Although (again, nitpicky alert) how did the ENTIRE British battalion sneak up on both Skaak and The Doctor without being noticed at all? That fog is Nintendo 64 levels of thick, it seems.

Swarm and Azure and the Passenger make it to the temple, and I’m even more confused. This feels like something you’d drop in episode 5, not episode 2. Again, I guess I have to roll with it and just let it work out (or not) by the end of the season.

Anyone have any money on the British troops? No? Well, yeah, that was inevitable, although there’s a nice historical parallel with what the British Empire used to do during colonial wars, and the attitudes that informed in play here. I have no idea how Mary Seacole’s going to get wounded troops off the battlefield though, given the Sontaran army is there and slaughtering everyone. Well… nearly everyone, anyway.

Dan just has a small job. Just take down the entire Sontaran army in Liverpool, armed with a Wok. Should be a doddle. This kind of thing could have landed flat or too contrived (and in some ways Karvanista’s reappearance is contrived) but it’s handled with enough aplomb to make it work.

Swarm and Azure are nicely threatening in tone and acting choices, but I still don’t like the makeup job. I mean, I look at Swarm and I just want to repeat the “My dog’s got no nose” gag, while Azure looks even more like Doomlord than her brother does.

I can’t be the only one who thought the Doctor wanted a pointy stick, probic vents for the purposes of probing, can I? Instead, there’s a very nice-in-theory way to defeat Sontaran ships by disrupting the food supplies. Armies march on their stomachs, or in this case Sontarans march on their refuelled armoured suits, and all that.

However, it’s again a little too convenient in a way, if only because if the entire Sontaran army goes down for 7.5 minutes every day or so, the Rutans would have abused the HELL out of that eons ago. Why aren’t there sentry guards, or landmines or something?

The army forces commander rather predictably blows the Sontaran ships up. I was half-expecting that to scupper the retreat and lead to further problems, but it doesn’t. Again, not sure that you should be able to take down a Sontaran timeship with some 19th century gunpowder. Still, it’s what the Brigadier would have done — or in this case, does in the planet’s future in The Silurians, anyway.

I half expected that to be the episode’s conclusion, but instead we’re back to Liverpool to quickly pick up Dan, and then off to the temple of time to release the triforce face off against Swarm and Azure.

This then is the cliffhanger for the episode, and I don’t get how we get from that to what’s in the trailer. But I guess that’s something that’ll keep me hooked until next week, won’t it?

Next time: Once, Upon Time.