Posted in Opinion
Author: Alex  Published Date: November 22, 2021  Leave a Comment on Thoughts on Doctor Who Flux: Village Of The Angels 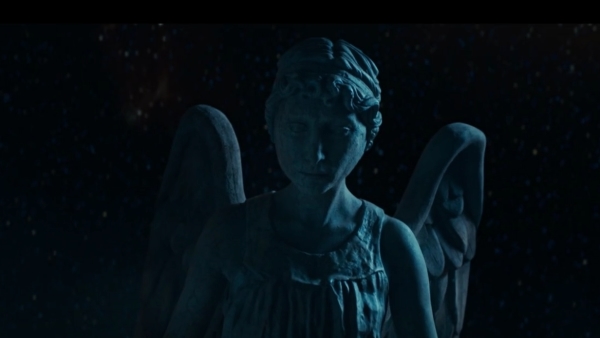 The fourth part of the latest season of Doctor Who is here, so naturally I have further thoughts. Also spoilers. Also Angels.

But as is traditional around these parts, I’d hate for anyone to wander into my musings by accident and have anything spoiled for them. So just in case — just in case — that’s you, I won’t start actually talking about Village Of The Angels until after the music video. Lurk beyond there, and there will be spoilers.

OK, so that was more like it. Sure, the whole Flux storyline is still being played out, and there’s still a lot more that’s being teased, but it’s being teased much more slowly, with room to breathe (and even blink!), making for a much more satisfying Doctor Who experience.

Central to this, naturally are the Angels, and the way that Village of The Angels treats them. It’s a wonderful bit of juxtaposition that matches up something that I’ve long thought makes for the best Doctor Who stories. Sure, you can have universal threats, but there’s also a lot of drama to be made out of smaller scale stories.

Village Of The Angels has both, because while the Flux is clearly creeping in on the village as our galactic threat, the Doctor, Claire and Professor Eustacius Jericho face a smaller scale, much more tense threat from what amounts to just a handful of Angels.

Although every single time they mentioned Professor Jericho, my head went here. Just me?

The tone is remiscent of some very classic Who — stories like The Daemons and Curse of the Fendahl come to mind — but with a small scale that means that most of the visual effects add a lot to the way the story plays out.

There are some plot points that are eminently obvious — I think pretty much any long-term Doctor Who watcher, and especially anyone familiar with past Angel stories would have picked that Mrs Heyward’s first name was going to be Margaret — and a few smaller story oddities. Like these ones, for example:

I’m keeping to my promise to not rank individual stories in the Flux season, because the overarching story — and especially the way that show runner and primary script writer Chris Chibnall is teasing out the plot — makes that a tad redundant.

However, I will say that Village Of The Angels has easily been my favourite ep of the series so far. There’s only a pair of episodes left to wrap this up — and to really work out if the journey so far has been worth it.

Next time: Survivors Of The Flux