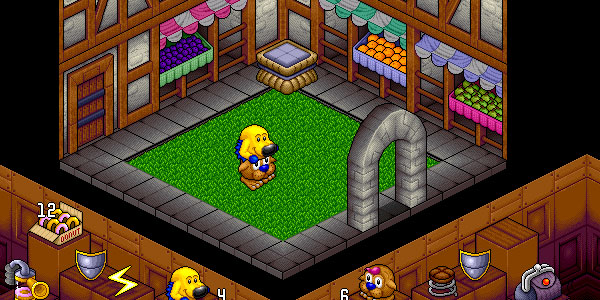 A classic game makes a comeback on Steam, and I revisit my childhood.

The 1980s were an experimental time in game design, both in terms of new ideas and the refinement of existing game formats.

Head Over Heels grew without a doubt out of the design ideas around games such as Knight Lore or (more obviously) the isometric Batman game produced by the same two programmers as Head Over Heels.

Back in the day it was my absolute favourite game to play on the mighty Amstrad PCW 8256.

OK, maybe it wasn’t that mighty. Although I did unearth it a year ago, and was surprised to discover it would still power up.

No sign of the Head Over Heels disk, sadly.

Games of that era were frequently the subject of fan remakes — I’ve written about a remake of the very similar Batman here — and there’s been a remake of Head Over Heels from the same team available for some time.

And now it’s on Steam, as a game you pay money for.

So what’s happened here, peering a little behind the scenes is that a third party (Piko Interactive) has bought up the IP rights to Head Over Heels, and it’s releasing it now, as it has the rights to do.

What’s more, it appears that instead of running it in an emulator shell, they’ve licensed the freeware fan remake, updated the music and… that’s about it.

Interesting strategy, and your own taste on how well that sits with you will determine whether you think that’s smart business, dodgy ethics or somewhere in-between. For what it’s worth, the freeware version is (no surprise) no longer available.

Still, what it should come back to is whether the game itself still holds value. I’ll admit, I got curious as to whether it was worth the asking price, so I dove into the Steam version to see whether it still had the same basic charm it had back in the day.

For those who have never played it before, the story… well, I’ll slice it clean out of Wikipedia for you:

Headus Mouthion (Head) and Footus Underium (Heels) are two spies from the planet Freedom. They are sent to Blacktooth to liberate the enslaved planets of Penitentiary, Safari, Book World and Egyptus, and then to defeat the Emperor to prevent further planets falling under his rule. Captured and separated, the spies are placed in the prison headquarters of Castle Blacktooth and must first escape, then break through the market to the orbiting Moonbase where they can teleport down to the planets to locate and reobtain the stolen crowns. Liberation of the planets and defeat of the Emperor will allow Head and Heels to return to Freedom as heroes.

Head over Heels is an isometric puzzle/platform game with the key hook being that Head can shoot enemies to solve puzzles, as long as he’s collected enough donut ammo to do so, and jump higher than Heels can.

For his part, Heels is way faster and early in the game gets the ability to carry a single object within one screen only. That’s the solution for his puzzles.

Key sections force you to seperate the two — indeed, this is how they start the game — but combined you get the benefits of all of their powers.

So far, so simple, and the remake-of-the-remake mostly gets this quite right. For my part, the nostalgia goggles didn’t quite feel right playing it in colour — there’s no green screen option for my tastes sadly — and I don’t love the music all that much.

Also a minor niggle, but having switched it to full screen, it doesn’t seem to work when switching back to windowed mode, and actual Steam integration is basically nonexistent. I got my screenshots the old fashioned way by hitting Print Screen and dumping them into Paint. There’s old school charm, and then there’s old school annoying, and this is very much in the latter camp.

But the core game? It’s still very much here for fans of old school gaming, and it’s not a particularly short experience if you’ve never played it before.

I was surprised at how quickly I remembered the solutions to each room, and so my own progress had been pretty rapid.

What if you’ve never played it before? Well, that’ll be a question of taste. It’s slower than you might think (although you can adjust the speed), and it’s relatively unforgiving while you’re still getting the controls down pat.

Some solutions are patently unfair, because you do often have to guess as to whether an obstacle is going to kill you or not. The game does give you quite a lot of lives for both Head and Heels, but you’ll need them.

However, it’s tough to get past the pricing of Head over Heels. At full price, it runs $15 AUD, which is on the higher side for an older game.

There’s always the elephant-in-the-room emulation issue to get past if you really must, but I’m struck by the fact that I’d be happier to recommend it to everyone if it was coming in at the under $10 level. At that price, it’d be more of a pick-up-and-play fun reminisce, or game you can idle your way through if you’ve never played it before. At $15, you could buy a lot of other Steam games.

Then again, Piko Interactive is also apparently going to release it (or has released it, the website’s language really isn’t clear on this score) for the Atari Jaguar (no, really!), and for that version, they’re asking $59.99. Are Jaguar fans that really that fanatical?