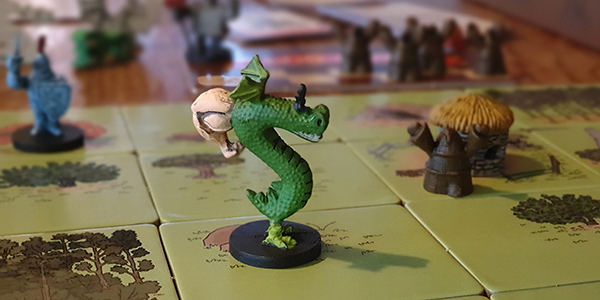 Because what the world needs now is burnination, sweet burnination. And maybe some consummate Vs.

Trogdor The Board Game Cons:
Can be a bit unfair
Some jokes will go right over player’s heads
Rulebook could be a little clearer on some points

I’ve been a fan of the Brothers Chaps’ Homestar Runner for… a very long time. Look, it makes me feel old when I realise that I can’t actually recall when I first watched a Homestar Runner cartoon.

Bearing in mind that they were composed and delivered entirely in Macromedia Flash (it wasn’t even Adobe Flash back then, youngsters!), we’re talking a fair few years ago.

While the entire enterprise started with Homestar Runner, it gained its biggest viral popularity via the Strong Bad emails, where readers would write in, essentially in the hopes of being mocked by Strong Bad himself. They’re genuinely funny, off-beat animations that still stand up well today. I’ve shown my kids many of them as simple quick content to view.

Which brings us, of course, to Trogdor The Burninator. If you’re not familiar, well, this is Trogdor’s debut:

Now, it’s been rather more quiet on the Homestar Runner front in the past decade, as the Brothers Chaps moved onto other projects, but I was intrigued enough last year when Trogdor: The Board Game popped up on Kickstarter.

I’ll be honest; my Kickstarter backing history is very small. I’ve seen far too many projects burn out, and plenty more that just seemed to be existing companies trying to generate low-fuss funds for stuff they could produce themselves anyway. But hey… Trogdor wouldn’t like that.

So I backed it, and it surprised me by turning up almost exactly on time. Who on Kickstarter actually does that?

It’s been sitting in my to-play-when-I-have-the-time pile since it turned up… which was this weekend.

So what’s the game about? Well, it’s a cooperative board game in which all players assume the role of Trogdor. The “deluxe” version I ended up with has some very nice plastic miniatures, as well as more traditional “meeple” flat tokens if you prefer that style. The game board is set up with a 5×5 tile set that you can arrange pretty much any way you’d like, which does give it potential for multiple play styles.

But why should I explain what it’s all about when Strong Bad can do it for me?

I adore the fact that there’s a whole downloadable EP of songs that explain pretty much every rule in the game. It definitely helps when you’re playing for the first time, because that’s always when you struggle with working out what everything does.

The core game is actually nicely easy to pick up. Every player gets an action card, which gives an ability and a quantity of action points that can be spent towards specific actions. Again, Homestar Runner can explain those better than I can:

Once you’ve moved Trogdor, who wants to BURNINATE THE COUNTRYSIDE (because, hey, he’s Trogdor), the enemies on the board respond with a random movement card.

Knights, Archers and the Troghammer will harm Trogdor, reducing his health if they hit him. Trogdor’s health is represented with peasants, who also roam around the board repairing burninated tiles, and sometimes being burninated themselves.

There’s a tricky balance here because when you take damage, peasants are sent to the void, never to return. Take too much damage, and it’s game over, but too many wandering peasants and you can’t possibly burninate all the countryside in time. Too few, and you can’t replenish your health to survive long enough to burninate the entire countryside.

It’s a balance that actively encourages cooperative play and chatter, and that’s something that’ll work best if everyone is au fait with the world of Trodgor and Strong Bad’s humour in general. There are a lot of in-jokes in the manual and on the game cards, and if you didn’t know any of them going in, it might seem less compelling. Not a problem in this household, mind you.

Trogdor: The Board game is quick and mostly fun, although the random element of enemy movement especially can make it rather tough for the players to win. There’s a balancing element — Trogdor’s Fiery Rage — that gives you one last random chance to win by having Trodor go on a random burninating rampage once his health is exhausted — but this is definitely a “light” strategy game as a result.

Did I get my kickstarter value out of Trogdor: The Board Game? Yeah, quite easily. I can see it joining the array of “quick” games in my board game shelf, and of course something I’ll pull out when friends already across the Homestar Runner experience come around.

While the Kickstarter part is done and shipped, it’s not currently available to directly buy, although I have seen a few copies pop up on online auction sites. The Homestar Runner site itself does suggest that direct sales are “coming soon”, however, so if you are keen, it’s probably worth checking over at the Homestar Runner online store to see if they’re now selling it direct.