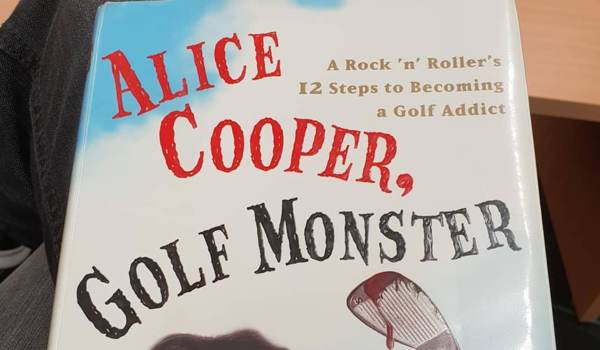 Been a good long while since I’ve done a book review, so why not one that mixes humour, hard rock and… golf?

If I’m looking to relax and read, the odds are very good that I’ll pick up a biography. It’s very much what I do.

Technically speaking, Alice Cooper, Golf Monster is an autobiography, except that it has not one, but two co-writers. That’s cheating on the “auto” side, although I’m not likely to argue with Alice Cooper over this one. For a start, he owns a lot of golf clubs, and after reading Alice Cooper, Golf Monster, I know he could afford to bend one or two over my skull.  Plus, the book’s central concept is kinda fascinating.

Alice Cooper trades on melodrama (and he’s not afraid to say so), and golf seems like an unusual juxtaposition for a man famous for (as it turns out, accidentally) killing a chicken on stage, amongst other stage stunts.

Now, I should make it clear from the outset that I don’t really care much about golf. Maybe you do, and if so, you’ll have some fun with the interstitial entries where Alice gives lots of golfing tips, as well as an insight into his “golfing addiction”.

Which — and to be clear here, I wouldn’t have read them at all if not for this fact — is a replacement for his other addictions, and a decent guideline for dealing with just about any kind of non-chemical addictive behaviour.

Which, of course, Alice had in spades in the 70s and early 1980s, being (in his own words) a pretty bad alcoholic.

Alcohol was his coping mechanism, and a lot of the book is about how he replaced one addiction for booze with another for hitting tiny balls into holes, despite the fact that the tiny balls have really done nothing to deserve it. Won’t somebody think of the tiny balls?

As an essential guide to the facts of Alice Cooper’s life, Alice Cooper, Golf Monster is a decent enough set of potted notes, but it’s definitely guilty of the classic celebrity soft sell in parts.

It’s fun, and lightly funny in exactly the way you might think an Alice Cooper autobiography would be, but there were so many sections where I wanted more detail.

The Alice Cooper band led to Alice Cooper (the act), but this is largely glossed over. Likewise, some key appearances, like his episode of The Muppet Show is mentioned, but there’s nowhere near enough detail for my tastes. While other anecdotes might have been cut back by the lawyers, I can’t imagine that one might have been problematic.

Then again, my tastes run to Jim Henson fanatic, and not so much golf, so maybe my own bias is showing.

The one area where you do get some insight is, not surprisingly, when he’s talking about his alcohol rehab, where relatively few punches are held. It’s significantly more honest than most celebrity-written autobiographies, but then it’s clear that Alice Cooper wants it to be a cautionary tale.

Although… spoiler alert… even he admits that after lapses and returns to rehab, he more or less went “cold turkey” via his brain essentially deciding not to drink any more. So it’s not entirely a question of providing a twelve-step program as a guideline for not what to do in the first place.

Still, I had fun reading Alice Cooper, Golf Monster, and that’s enough for what I needed. For the record, I read a copy I borrowed from my local library (reminder: Libraries are AWESOME), and it’s exactly the level of reading where I’m happy to have read it without needing to own a copy.

For vacation reading, or on a long plane flight it’s good enough to while away a few hours, but that’s about it.

Oh, and you might learn something about golf. I’m not sure I did, mind you.