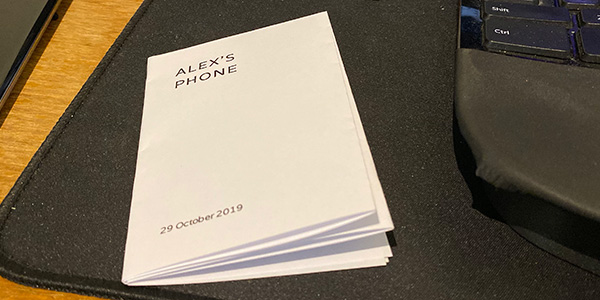 You’ve actually got a choice when it comes to foldable phones in Australia — but which should you choose?

Samsung’s Galaxy Fold smartphone will launch in Australia tomorrow — I’ve written about the launch here, and have some hands-on impressions at Finder here and at Ausdroid here — after some considerable delays incurred when the initial models were, to put it politely, not terribly robust.

The Galaxy Fold is technically the first “foldable” phone to hit the market (if one discounts the LG V50 ThinQ), but at $2,999, it’s not cheap.

However, Google, fresh off launching the Pixel 4, announced its own foldable phone this week… sort of.

But which should you opt for? 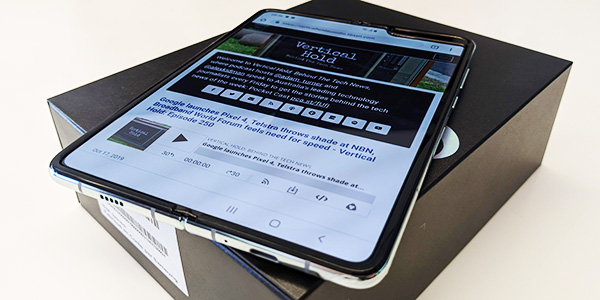 The Google Paper Phone has the dimensions of an A4 sheet of paper, so fully expanded you’re looking at around a 14.3 inch screen. It’s feasible you could alter the underlying PDF and print an even larger A3 Paper Phone, but that would significantly impact its overall size and weight when folded.

Each folded section comes in at around 5 inches each — it’ll vary a little depending on how sharp your creases are — but you do technically get eight of them in total. Resolution isn’t great, however, with most screens being monochrome only.

The Google Paper Phone supports up to 9 apps per day (or per print cycle), with maps, contacts, calendar, weather, tasks, notes, photos, contactless and a range of “paper apps” that let you print conversion charts, sudoku or an origami pigeon. It seems unlikely that Google will be able to get any additional app developers on board, so there’s no support for popular applications such as Whatsapp or Spotify.

The Samsung Galaxy Fold has full access to the millions of apps available on the Google Play store, many of which are updated regularly.

You will need some kind of data connection to add new apps, however. While the Google Paper Phone supports up to 9 apps running concurrently, the Galaxy Fold typically supports 3 in unfolded mode, although you can float more windows than that if you’re particularly keen.

Samsung has faced some criticism — and it’s fair enough for a $2,999 phone — around the durability of the Galaxy Fold’s plastic display. While higher-end handsets such as the Galaxy Note10 are highly water resistant, that’s not a feature of the Galaxy Fold.

I didn’t have a Galaxy Fold to do any durability testing on — and I don’t quite have the budget for destruction — but CNET has already put the Galaxy Fold through its paces for unfolding and refolding at the very least.

The Google Paper Phone is without a doubt the least durable phone I’ve ever tested. Even the slightest hint of moisture can lead to serious corruption of its stored memory. Even the Wicked Witch of The West was more durable than this thing.

Again, lacking a Galaxy Fold to test on, I can’t say too much about the Galaxy Fold’s ability to take and make calls, but there’s little reason to suspect it shouldn’t work as well as any other Samsung handset. Many of Samsung’s phones have even managed to get Telstra’s “Blue Tick” certification (I wrote about that process here), but it’s not clear at the time of writing if the Galaxy Fold will be one of those.

No matter how hard I try, I cannot seem to get the Google Paper Phone off its default mute setting. I presume it must be an eSIM phone, too, as there seems to be no obvious way to insert a SIM, and poking it with a SIM tool simply led to more structural failure.

Again, I’m limited by the testing time I’ve had with the Galaxy Fold, largely at IFA in Berlin. The Galaxy Fold features a 4,380mAh battery, which isn’t the biggest you’ll find in a flagship smartphone right now. Indeed, there are even mid-range and budget models with larger battery capacities than that, although I can imagine the physical restraints of folding do play a part in limiting overall battery capacity.

The Google Paper Phone features some kind of sealed battery, but Google hasn’t released its specifications. While overall battery life seems impressive, especially given its always-on display, my own attempts at an iFixit style “teardown” just resulted in the entire phone falling apart.

The Google Paper Phone is a free app, but you’ll have to pay for your own paper and printer ink to make it. Given it requires updating every single day — or more frequently if you get it wet — you’re looking at a cost of somewhere around 5c per day or more, depending on your printer model and the data density of what you print onto it.

(You can blame the man they call Fergus Halliday for me going through with this incredibly silly idea.)