Posted in Opinion
Author: Alex  Published Date: February 25, 2021  Leave a Comment on Is Apple really going to revive the G4 Cube in 2021? Probably not. 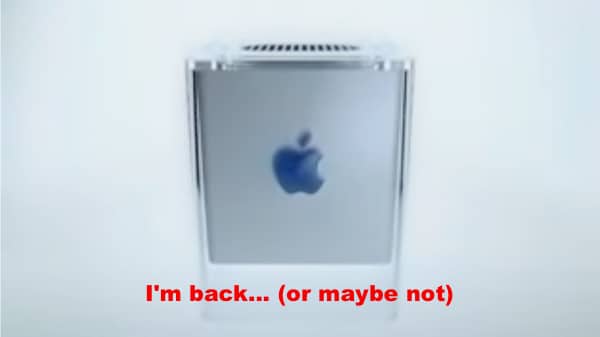 Lots of news sites are breathlessly reporting that one of Apple’s upcoming desktop Macs will be a “reimagined” G4 Cube. Only Apple knows for sure… but I doubt it.

There’s nothing more that the Apple-covering tech press loves more than a juicy rumour, especially when it’s both fanciful and will do little or nothing to damage their relationships with Apple PR.

Today’s rumour du jour is that alongside randomly coloured iMacs — I wouldn’t think they’re selling well enough to keep that many colours in stock, but feasible-maybe, I guess — is the idea that Apple will revisit the rather infamous Apple G4 Cube for one of its upcoming “Apple Silicon” desktop Macs.

It’s an interesting idea, and there’s not much doubt that Apple is planning on playing around with designs and form factors for its computers now that it’s started the shift to a single, ARM-centric world.

But the G4 Cube? I’m not so convinced, for a couple of reasons. I should probably point out that I’d be one of a shrinking number of tech journalists that remembers the original G4 Cube.

Indeed, back in the day — the day in fact being in the year 2000, so (gulp) 21 years ago — I reviewed it for Australian Personal Computer magazine, at a point where Apple wasn’t on much of an upwards trajectory. The iPod really saved that company… but I digress.

I loved the G4 Cube’s design, which was totally out there and quite different from much else you could get at the time. It certainly was a looker, but there wasn’t much of a reason for folks to look twice, thanks to the price and its power and upgrade potential. Apple’s G4 towers at the time had both interesting visual designs and a genuinely useful fold-down panel that made accessing the internals nice and easy, but you didn’t get that with the G4 Cube.

As an aside, the whole ‘clapping at product reveals’ thing really bugs me. Why do journalists do that?

Getting back to the G4 Cube, all you got was a vertically mounted optical drive and a neat look at a high price. It really was a product in need of a market that really didn’t exist at that time, and a sign of how prominently Apple was placing design over practical considerations — a move that didn’t slow much in the years that followed.

Fast forward to 2021, and Apple’s market position is quite different, but those G4 Cube rumours have resurfaced, and I’m once again facing that question of why.

Why, specifically, do you want or need that form factor in 2021, and what would you use that space for in a Mac that anyone would buy. Pretty obviously it won’t ship with any kind of optical drive, because those have been DOA on Macs for years now.

However, in an Apple Silicon age, what takes its place? The whole point of Apple’s M-Silicon — it seems pretty likely to me that we’ll see M2, M3 and so on chips, it’ won’t all be the M1 chip forever — is that almost all of the core computing functions sit on the single chip itself. Apple didn’t invent that design idea by a very long shot, but it’s clearly staking its computing future on it.

As such, it can and has built a Mac Mini around it, and based on what it can do with ARM-based silicon in iPhones, it could take the Mac Mini smaller. That I could totally see, because outside external ports and interfaces and a degree of heat dissipation, you might not need much more.

So why take it bigger? What advantages are you going to add? Apple seems to be shifting to in-house tech all the way, but it’s feasible you could opt for a more “Pro” style design that allows for paired external GPUs or the like, but that’s a niche within a niche.

It’s also one that could potentially be better served selling an external GPU enclosure, as you get within some gaming laptops in the Windows world. Storage these days is SSD and fused to motherboards, so while Apple could offer more of it, it’s not going to take up the space.

There’s functionally two concepts that would seem to make sense to me. The reports today suggest that it’s mostly heat sinks. If so, that’s one HUGE heat sink, and it would suggest that Apple has a chip that otherwise fries itself if it’s not kept in a fridge. Don’t know that I’d be lining up to buy one of those, because the moment you have a thermal interruption of some sort, your Mac is cooked.

The other concept is to use that space at the top as a fish tank.

That one’s going to need some engineering work, and I suspect the RSPCA may step in at some point.