Posted in Humour
Author: Alex  Published Date: October 15, 2021  Leave a Comment on Can you improve an HTC 7 Mozart with googly eyes? 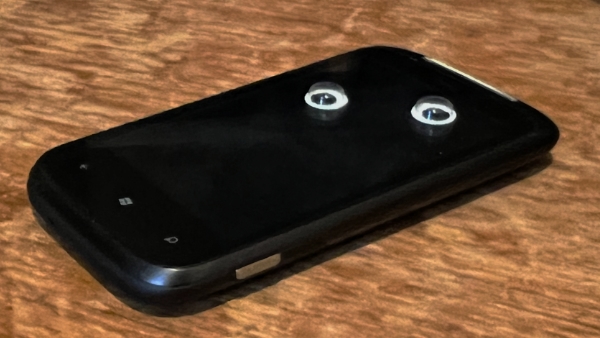 Once more unto the junk drawer of ancient phones, this time for a completely dead HTC Mozart 7.

Over time, and because I’ve reviewed a lot of phones over the years, I’ve built up quite a stock of seriously old, seriously decrepit bits of tech. Honestly, most of the time phone makers ask for their devices back, but not always, and I can’t use everything all of the time.

I’ve already tested out the Galaxy Note 3 for this not-particularly-serious test, so why not switch around mobile operating systems for a change?

No… not to iOS, although I’m pretty sure I’ve got an ancient iPhone kicking around here somewhere. How about… a Windows Phone 7 device?

Actually, this HTC 7 Mozart could be running any phone OS as far as I could now tell… because it won’t power on beyond a pure white splash screen. It’s dead, Jim. Sadly too, my original review of the HTC 7 Mozart is nowhere to be found on the web, although I did uncover this decade-old interview that mentions it over at Gizmodo.

As always, this isn’t a serious effort in any way — I’m just having a little fun with gadgets before they head off to be responsibly recycled. If you’ve got old phones or gadgets kicking around, don’t throw them in the garbage — recycle them!