Posted in Games
Author: Alex  Published Date: July 6, 2019  2 Comments on The one in which I end up with a new… errm… old console. 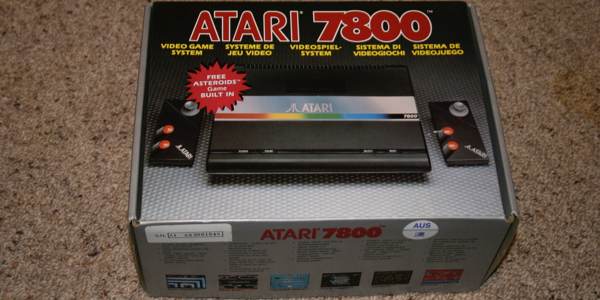 This is now an old, old story — it happened back in 2008! — but I’m republishing it as I’ve still got said console, and I’m setting it up again for some serious playtime.

People throw out the strangest things, something I found out first-hand this morning.

It’s council kerbside pickup time — we get two Sundays a year where the council will come by (well, not all of them — I understand the Lord Mayor has a bad back, and the folks in the planning department can never plan the time, but I digress) and collect the types of waste that don’t go into regular or recycling bins.

Old fridges, broken furniture and more than slightly soiled mattresses abound, which makes one wonder — where do people store all these things while they wait for pickup season?

In my case, the answer to that is “under the house”, and we had lots to put out, which we did yesterday afternoon, essentially as a post-4 year old party activity. All the carpet from our renovations, an old bookcase and lots and lots of bits of crud.

I was slightly annoyed this morning to notice that one of our neighbours had “added” their rusty old ironing board to our pile — it’s not that I mind them recycling, but there are limits to the mass that council will take, and we still had more to add. Hopefully, it won’t matter.

Anyway, I had to walk home after church this morning, walking past people’s old broken lamps, mouldy garden furniture and the like when I spotted something that pinged my interest — a logo, that as a gamer, I knew very well. An Atari logo. But it couldn’t be… could it?

Hmm. That’s in pretty good condition, all things considered. And my beloved 2600 is a bit knackered (the 7800 is backwards compatible). I was willing to bet that it would be console only, or a cable would be missing…

Blimey. It’s all there. Controllers, instruction manual, power pack, coax cable — even the warranty card. All in (given the age of the unit) as near to mint condition as makes no difference.

They’d even kept the receipt, which tells me it was purchased at the Big W store in the Macquarie Centre on the 10/01/90 for a grand total of… $147.

Probably a touch overpriced to buy it at that price on thatday, but I can’t complain about free, really.

Now, if you’ll excuse me, I have a whole ton of Donkey Kong, Combat and Outlaw to play. Not to mention working out exactly what it is that Yar is trying to gain revenge for.

2 thoughts on “The one in which I end up with a new… errm… old console.”