Posted in Opinion
Author: Alex  Published Date: July 6, 2019  3 Comments on The Goodies: The Movie heads to Indiegogo, but in an unusual way 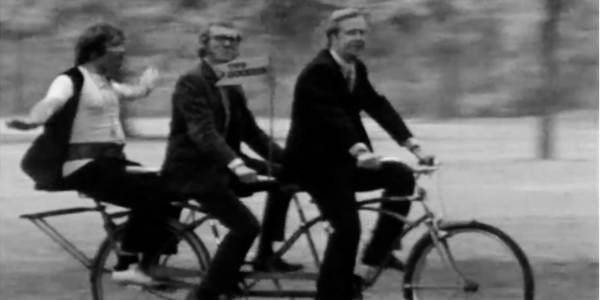 I’m a huge Goodies fan… but I’m a little concerned.

I’ve been enjoying the box set of the full BBC series (you can read the review here) and had no particular problem with the higher than usual asking price it commanded. This is The Goodies, and I was happy to pay it, and even happier with the extras that earlier backers scored for pre-ordering it.

So when the news hit earlier this week that there’s a crowdfunding effort to produce a Goodies documentary for release next year, my interest was well and truly piqued.

It’s the 50th anniversary of the first series, and of course we’re blessed to still have all three very fine gentlemen with us, which aids in getting good interview footage recorded, plus whatever rarities they’re able to uncover.

One of my oddest-but-proudest possessions is one of the original recording scripts for “It Might As Well Be String” (it used to be Tim’s copy, fact-fans), and it’s replete with lots of cute detail that never made it into the final episode. I’m sure there’s plenty more like that which could go into a documentary.

Still… and it really pains me to write this… I’m not 100% on board with the doco, for one very simple reason. It’s a crowdfunded effort (and I get that it’s a good way to get niche content made) for a cinema release of said documentary, with a variety of “perks” at different price tiers.

Yeah, I went there.

My hesitation, however, is because all of the perks are for ancillary merchandise — T-shirts, caps and a live Q&A — but not a copy of the finished doco itself.

That’s an unusual step to entice folks. The live Q&A is a lovely idea, but having done more than a few interviews that way, it’s fraught with potential difficulties — how do you deal with poor connections, time zones or if you don’t get “your” question in?

But I’m more concerned because most of these kinds of projects tend to offer you access to the end video product itself.

I can see it doing moderate business in the UK, but international distribution is another story entirely. It’s the kind of thing that Dendy (or similar indie cinemas) might pick up for a showing or two. But what if the screenings they have don’t work for me? How will I feel if it’s picked up by (and I could totally see this happening) the ABC or SBS for streaming?

Now, in that scenario I do get to see it at some point, but there’s also the prospect I might never get to easily see it.

I hope I’m wrong, but that’s the way the current perk listing reads, and sadly, it means I’m reluctant to back it.

Yeah, I get the risks for crowdfunding, and obviously printing discs or providing servers has its own costs. Still, I’m less than sold.

Any Goodies fans out there backing this? Am I wrong to be concerned about something I’d still very much like to see happening? I would leave a comment on the Indiegogo page, but I’ve got to be a backer to do that…

(Happy to hear from the project runners, on this, of course. Contact details are here)

If you’re keen, the Indiegogo page for The Goodies: The Movie is here.

3 thoughts on “The Goodies: The Movie heads to Indiegogo, but in an unusual way”