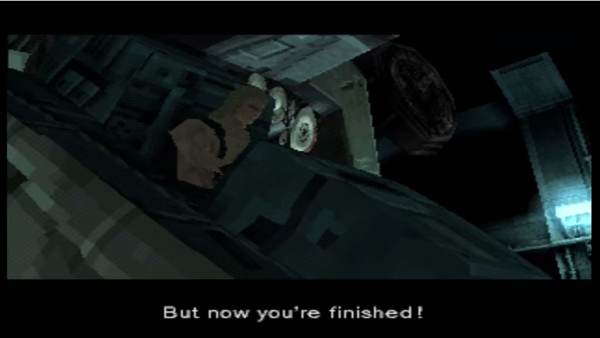 Well, that was… interesting. Interesting in some ways I could have predicted, and others I didn’t quite see coming.

This is the second part of my thoughts on Hideo Kojima’s classic Metal Gear Solid.

You probably should read the first part, found here.

I actually didn’t plan on finishing Metal Gear Solid quite this rapidly, but then an accident involving a collapsing chair, my right leg and a certain quantity of pain led to me spending much of the weekend lying down with the PlayStation Classic within reach.

But before I start, as is traditional around these parts, a little spoiler space.

Just in case you’ve not played a 21 year old PS One game.

In which case, scroll no further than the cryptically suitable video below!

So, in no particular order, my thoughts on Metal Gear Solid.

For anyone keeping score, I’d stopped just before the big tank battle with Vulcan Raven when I wrote the first part.

I’d already commented on how the visuals have obvious rough edges, and that’s something that stayed with me throughout the game. There’s plenty of cinematic flair in terms of camera angles and attempted effects to keep you intrigued, and it does give it a certain gritty appeal.

It’s still undone all too often by the primitive nature of early 3D visuals. As an example, the battle with Psycho Mantis.

But I think you know what I mean.

As a scene it should be shocking, because it’s very obvious to Snake that Meryl isn’t in control of herself, but it loses so much of that emphasis because the underlying technology can’t quite keep up.

Metal Gear Solid of course sells itself on its narrative hooks, which veer between the profound, the psuedo-profound and the downright wacky, often within the same scene, so that visual setting is rather important.

Equally vital is the gameplay.

I totally get how revolutionary Metal Gear Solid was for its time, but playing it now, I often found myself bamboozled by objects I hadn’t collected. Mine detectors! Gas masks! Body armour… just to name a few.

Metal Gear Solid punished me for not doing so, despite the fact that there were few clues to their existence before I actually needed them.

To be totally honest, I stumbled upon Meryl-as-a-fake-guard by accident while trying to work out exactly what it was Snake was meant to do next.

This wouldn’t be as much of an issue if it was consistent in matters such as where Snake can or can’t go.

It’s still somewhat baffling that he’s entirely happy to hop up into the back of troop transport or rappel down a building while being strafed by a helicopter, but something as simple as a waist-high wall is too much for him to scale.

It took me some time to learn to love the CODEC, where so many of the game’s hints are held, but also the richness of its plot.

I was good, and worked without a guide of any kind to keep the experience as honest as possible, and that meant listening through a lot of conversations as they rolled out, as well as all the rather lengthy cutscenes, as I might have done if I were playing it back in 1998.

I actually think the CODEC is the part of the gameplay that still stands up best in a modern gameplay context. The aiming and general gunplay isn’t terribly strong, and neither is the hand-to-hand combat.

There was something satisfying in the basic stealth, and I’d be lying if I said I didn’t laugh at that bit where you sneak up on  the genome soldier at the urinal, especially as Kojima went to the trouble of having steam come off the urinal.

Still, the guards are really stupid, and there’s more than a few “cheap” deaths or sections where you’re almost guaranteed to fail the first time due to camera angles or surprise attacks from your foes.

There were some highlights that worked well enough within those constraints, like the second Vulcan Raven battle, or the stealth suit fight in the elevator.

I also had fun with the Ninja/Grey Fox battle, because while it was tough, it never felt like it was unfair, or limiting in my creativity in how I tackled it.

I was also somewhat impressed that the game let me use the Nikita missiles against Sniper Wolf the second time, although it did make that particular battle stupidly easy.

From the cutscene that follows, it’s rather obvious that you’re expected to duke it out with sniper rifles, but by that stage I was rather just getting on with it as expeditiously as possible.

That last battle against Metal Gear Rex also dragged more than I would have liked.

My play counter tells me I continued 95 times, which means, at 2-3 screams of SNAAAAAKE at the continue screen (depending on the voice), I heard SNAAAAAKE up to 285 times before I was done.

You may mock my terrible quality of play, if you must.

But I swear that at least 40 of those continues were in that battle against Metal Gear Rex. Probably didn’t help that I went into it with only one ration to my name, but again much of that was down to guards or automated cameras “hidden” around corners when the radar was blocked.

If you don’t know that they’re hiding, you only find out when they shoot you.

I do get the idea behind the mano-y-mano battle between Solid and Liquid Snake on top of the downed Metal Gear, because I’ve watched pretty much every 80s action-adventure flick that they’re riffing on.

Still, it wasn’t much of a satisfying actual battle, and neither was the car chase that followed.

Then again, I was already annoyed at that point by the fetch quest nature of the launch card, and also how much of an idiot ball both Solid Snake and Otacon were passing around with regards to the “twist” that it would launch Metal Gear.

That was rather obvious when Liquid Snake vanished from the “bulletproof” launch room to allow you to actually punch the key in anyway.

It was only after finishing that I checked around and discovered that it’s actually possible to give up on the torture mini-game and let Meryl die in return for a different end-game goodie. And that if I play through the whole thing again, I’d get yet another goodie, in the form of a tuxedo, apparently.

I’ve enjoyed my time with Metal Gear Solid, but I don’t know that I loved it enough to go back a second and third time.

Or should I move onto Metal Gear Solid 2?

Retro recollections are just random musings on retro subjects, usually whatever I’m playing at the moment.