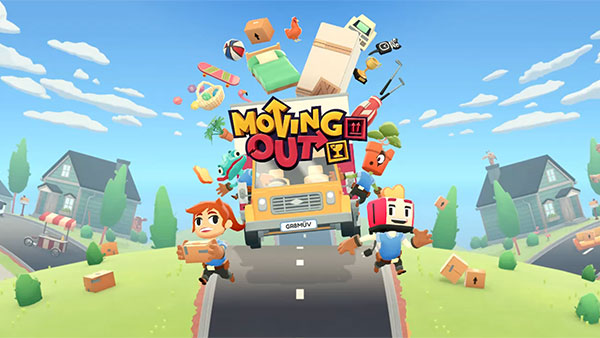 Not, as you might think, a game about a Billy Joel song, but instead a glorious knockabout multiplayer romp with surprisingly good single player appeal as well.

Moving house is always super stressful. There can be excitement in actually changing address, especially if you’re moving from a dump to a palace — even relatively speaking — but the actual mechanics of shifting your chattels isn’t a whole lot of fun. I’ve moved many times, but usually under my own steam or with the help of friends.

I’ll be honest; the only time I’ve had to deal with actual paid removalists, they were lovely and easy folk to deal with, and they did an amazing job of moving my goods from one property to another.

The stress there were the wholly incompetent builders my ex-insurance company foisted on me — but that’s a story I’ve told elsewhere.

Moving Out is a simulation game in a very similar vein to titles such as Overcooked; you play as a Furniture Arrangement & Relocation Technician (yes, the puns and writing are at that level, but that’s OK) freshly hired by Smooth Moves, a moving company in the fictional town of Packmore, tasked with… as you might imagine from that intro… moving furniture.

On the surface, a very dull and painful idea, but in incorporating the same kind of light comic tone, and much of the same approach to lightweight slippy physics as many of its contemporaries, Aussie developers SMG Studio manage to transform this stressful and dull activity into a chaotic riot of thrown sofas, smashed wine glasses and vengeful turtles out on the attack.

Moving Out is predominantly pitched as a multiplayer game with up to 4 players frantically trying to pack the truck (or sometimes a goods lift or other transportation device) as quickly as possible, because you’re always fighting the clock. Window in-between you and that bed? Get one mover on each end, and heft it on through down to the truck below!

Door in the way? Smack it a few times (or hit it with that same sofa enough) and it will break away, making egress that much easier.

Just remember not to do that with the wine glasses, because they shatter very easily.

I’ve been playing through Moving Out with my family, and while I’d like to say that it’s been a great family bonding exercise through the slow and methodical working out of the most logical chain of movements to pack the truck efficiently, this almost never happens.

Instead, we’re stuck pitching, slapping and bumping boxes into the truck, dodging vehicles and trying to meet some otherwise absurd mission objectives along the way as everyone shouts at each other about how much they need help with those annoying corner sofas or long carpets.

That’s kind of the point, because like Overcooked, the joy is in the chaos, whether that’s crashing a TV into a pool (not recommended) or pulling a toaster out from the wall while it’s still plugged in (also not recommended, but actually you have to do this). Most of the time we’ve found ourselves solidly scoring just the bronze medals for timing, but that’s also because it turns out my kids must think an awful lot like the developers do.

Alongside your assortment of objects that need shifting, there’s also a range of secondary objectives that grant you bonus coins. Some of these are obvious, if difficult. Any level that doesn’t want you to break any glass is asking for trouble, because it turns out the residents all bought houses and offices with windows made from sugar glass. I swear, you glare at that stuff the wrong way and it shatters.

However, other objectives are a little more obscure, and my kids are (so far) very good at sniffing them out, even if it means we don’t meet the silver or gold level objectives very often. Of course, that just gives us a little more replay value down the track.

One particularly nice part of the multiplayer experience is that you can configure a range of “assists” to make the game easier, which is a very nice sop to younger players (or more elderly, less game-aware ones) who might want to join in but have little in the way of gaming skills. There’s no penalty for using these assists either, so you can pretty easily progress through the game if that’s what you want to do.

As you gather coins you unlock some fiendishly hard — and often quite funny — mini-games playable in the local arcade. They’re still all about moving furniture, but with specific and quite torturous twists that maintain some solid challenge in themselves. They’re very reminiscent of the special stages in Super Mario Sunshine (if you remember them) in that they’re graphically stripped down while the challenge is pumped up immensely.

While moving, pushing, pitching and hurling furniture with your couch co-op friends is the key pitch, you can also play Moving Out as a single player experience. I went into that with some trepidation; after all, to invoke the likes of Overcooked (again), that’s a game that struggles a lot with a solo experience, because it’s basically “hard mode” and not much else.

Moving Out smartly avoids that trap by changing not only the goals for each level, but even the in game physics. A bed that you needed two folks to shift in multiplayer will move for a solo mover, but you can’t easily pitch it, so you need to devise an entirely different way to get it down to the truck. While the time pressure is still very much present, it turns the game into more of a logistical puzzle — just the thing for when I’ve had enough of a noisy moving battle with my family!

Moving Out very nicely meets its remit, which is essentially to deliver a simple and fun party game experience. Like most titles of that style there’s not masses of depth or intricate combos or anything to learn here, and it’s a game that’s definitely best played in stretches.

More than once I’ve stopped a family game because things were getting just a little too heated (myself included) when truck stacking — or as we tend to call it, Tetris-ing — went horribly wrong. That’s an indication, however, of just how passionate this game can make you about moving sofas.

Moving Out is available now for the Nintendo Switch (as reviewed), PlayStation 4, Xbox One and PC via Steam.

I don’t do scores unless I have to. If you scrolled down here hoping to find a quick score, GO READ THE REVIEW!

I do however encourage transparency. This review was written using review code supplied by the publisher of Moving Out. Make of that what you will.