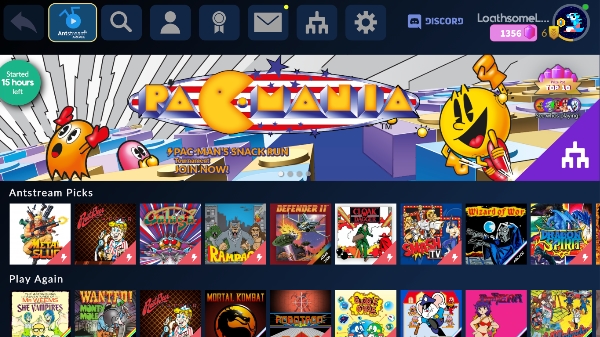 Antstream Arcade’s payment model in Australia is confusing as hell, and there are a few small glitches in the way that it works and its platform support, but if you’re after an easy way to relive those classic games of your childhood, it’s a very impressive service.

Bad:
Subscription model is confusing as hell
Action centric games can get glitchy
No console clients (for now)
Some games have not aged well

So, a couple of months ago, I got a PR enquiry from a technology firm. That, for me is nothing new – I get about 50 or so pitches like that every day. This one was from Antstream Arcade, a UK based streaming subscription service with a hook I was all too familiar with.

Antstream Arcade streams retro video games, and when I say stream, I’m not talking your Twitch or YouTube style effort where you watch somebody else play the game.

Instead, you’re playing your title of choice, but everything from the graphics to the sound to your actual control inputs aren’t being run on your device of choice at all. Instead, they’re running on a remote server, and what you’re streaming are instead the results of your inputs, streamed as gameplay in hopefully-real-time.

Once upon a time, we would have considered such approaches as witchcraft, but then services such as Microsoft’s Xbox Cloud Gaming or the never-coming-to-Australia-apparently-PlayStation Now have been around for quite a while now.

The odd thing about this PR outreach wasn’t that it didn’t fit into my interests. It was that at the time, Antstream Arcade hadn’t launched into Australia at all.

You might have been able to access it, but you’d be playing remotely on servers located in the UK which would, I’d think, give it a serious new definition of lag.

I queried them, and got told that they had “plans” for Australia… but nothing to announce at that time.

A while later, the Atari VCS landed on my review desk. Not a terribly impressive bit of kit for the money (you can read my full review over at Finder).

The one service that did impress me on the VCS was Antstream, which launched in Australia alongside the VCS. It’s not a VCS exclusive, however, and I’ve spent a little time testing it out.

The core appeal of Antstream Arcade is that it’s a 100% licensed and claimed entirely legitimate way to play a vast library of retro video games on your platform of choice.

While the ownership of some titles is (as any retro gaming fan could tell you) murky as hell, that legitimate status is an interesting one for Australian users, because our current copyright regime explicitly does not allow you to play “backups” (or ROMs) of anything – even games you still own.

Hey, don’t take my word for it – here’s a Lifehacker article that goes into the whole format shifting/copyright picture in Australia in detail, written by one of our finest* tech journalists.

Antstream offers a simple client that connects to its server, but you don’t actually download a game at any time.

Instead, you connect up to its server, which runs an instance of that game on a virtual emulation platform, with support for keyboard, controller or touch inputs depending on where you’re playing a given title.

The library is remarkably wide, and covers a lot of those classic titles that you probably think of when somebody says “retro gaming”. So yes, there’s the option to play Pac-Man, or Elevator Action, or Mortal Kombat or Galaga… you get the picture.

Antstream Arcade doesn’t have everything – don’t bother looking for Nintendo or Capcom titles for example – but there’s plenty enough to tickle your retro fancy whether you prefer classic arcade games, or cut your teeth on the Commodore 64 or Spectrum platforms.

That wide accessible library is one of my favourite parts of the experience, because while I’m notably a retro gaming fan, I’ve not played everything on every possible platform. Antstream Arcade has reminded me of games I forgot existed such as B.C. Bill, as well as ones I never knew existed, such as (and I swear I’m not making this up) The Astonishing Adventures of Mr Weems And The She-Vampires.

You can play most games in their original states if that takes your fancy, but where Antstream Arcade adds a nice wrinkle is in its challenge modes. Most of these tend to throw you into last-life remaining challenges, but not always, and it gives you a target to work against in the same way that your local arcade back in the day offered you a high score table… only global. At the time of writing, I’m 32nd in the world at one of its Bubble Bobble challenges, and keen to get back to it!

The most obvious question around this kind of game streaming is the quality of the experience. Antstream Arcade’s particular advantage is of course that many of its 8 and 16 bit titles aren’t exactly data intensive, and most of them aren’t even all that frame specific in terms of their inputs. I’ve already whiled away quite a bit of time reacquainting myself with Wanted: Monty Mole without complaint.

Some caveats apply here: I’m testing on a 250/50 HFC NBN connection, and those on much slower broadband could find it a more challenging affair.

There are some titles that are definitely more constrained by the streaming model on Antstream Arcade in Australia, none more so (from my experience) than Midway’s classic Mortal Kombat.

Admit it.. you started humming this as soon as I said “Mortal Kombat”, didn’t you?

Mortal Kombat, more than anything else I’ve played on Antstream Arcade suffers under a streaming model, both in terms of accepting inputs and in visual display style.

Be ready for a few blocky images as you play, and slightly more frustration when trying to pull off those fatalities than in the classic arcade era.

There’s also the issue that while Antstream Arcade boasts of having more than 1,000 titles, the simple reality of retrogaming still applies.

I maintain that there are plenty of classic retro gaming titles that have kept their charms, but there are equally those that haven’t aged well, whether it’s on the grounds of themes, gameplay styles or even just that they were a bit crap to begin with.

Like, for example, The Astonishing Adventures of Mr Weems And The She-Vampires. I’ve played it once, and that was enough.

What does Antstream Arcade cost in Australia?

Here’s the other weird part of the whole Antstream Arcade experience. In theory, it’s a subscription service, paying its own bills to the rights holders and the server operators by charging you a fee.

Or at least, not if you don’t want to, and I can’t quite pick why you would.

The problems here are twofold.

In theory, the paid tiers remove the ads, as you’d expect, but that’s still a fairly steep kind of price on a monthly basis compared to other streaming services – or indeed gaming services generally, when you consider that something like Microsoft’s Xbox Gamepass is cheaper on a monthly basis, and way cheaper if you do that whole Xbox Live swap deal.

Antstream doesn’t really make it clear what other benefits you get out of the paid tier, and this is where the other problem emerges.

You might think that the ad-supported tier would pop up a dodgy app ad between each game, the way that any IAP-supported phone app you’ve ever tested does, right?

Only… not so. Or at least, not so far, because while I’ve been playing on Antstream Arcade for a while now, I’m yet to see a single ad.

Have they sold no ads in Australia?

Are they plentiful in other territories?

I’ve no idea at all, but it doesn’t exactly fill me with a burning need to give them money.

It does make me wonder how the lights stay on, but maybe that’s not my problem.

The verdict: Lots of fun, but no reason to pay (for now)

If anyone was under the misapprehension that I wasn’t keen on retro gaming… well, you know better now.

I’m not going to dump my collection in favour of Antstream, and I do wonder about its long term viability, but if you’re interested in exploring the wider world of retro, it’s a great and simple way to get a legal retro hit for an appealing price point.

Sure, emulation exists and isn’t going away any time soon, but at “free”, it’s the same price with no configuration woes, no malware and challenges built in.

There’s quite a lot to like here, especially in an ad-free gaming world.