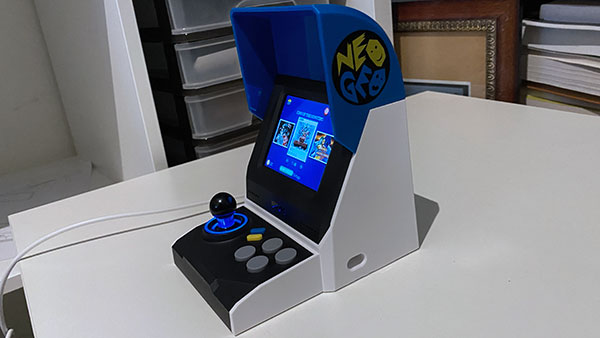 The Neo Geo Mini isn’t a new mini console by any stretch of the imagination, but is it worth your money now that the price has dropped considerably?

When the Neo Geo Mini was released back in 2018, I had a distinct feeling of nostalgia.

Not just because all of these mini consoles play on your emotional or nostalgic attachments to games of yesteryear, but also because I figured out relatively quickly that I couldn’t quite justify the $149 asking price for one. It was just too pricey, and that made me honestly nostalgic for the Neo Geo itself. Back in the 1990s, the Neo Geo platform was likewise lovely, but well out of reach of my meagre student budget.

Even in the years that have passed since then, while my income has improved markedly – I no longer live on a $5/week food budget, for example – I haven’t dipped my toes into the Neo Geo collecting world because it was, and remains a pricey platform.

However – and with a hat tip to Alex “Ausretrogamer” Boz – it was pointed out to me recently that Amazon was selling them off for the equivalent of $50 each through the US, and my interest was piqued at that price point.

I’ve spent more than that on a single game in the past, let alone a multi-game collection that comes wrapped in a cute arcade style casing, so the risk seemed low.

However, what that does mean is that I’ve approached the Neo Geo Mini in somewhat different style to many who would have rushed to buy one when they first appeared. I’ve not owned a Neo Geo, and my exposure and experience is based around throwing a few dollars back into the arcade variants back in the day, along with a little light ownership of some of the titles that got SNES conversions.

As such, some of the issues that are perfectly fair to point out, like the fact that the button layout isn’t identical to a classic Neo Geo controller, or that the joystick isn’t 100% as responsive and clicky as the classic ones are issues that haven’t explicitly affected the way I play most of the games. I can totally understand why the actual Neo Geo collecting community were ticked off by this, however.

I’m also taking this very much as a solo experience; while the Neo Geo Mini was affordable within my budget, the add-on controllers didn’t appear to be on special. If anyone knows anywhere I can source one at a reasonable price – it would seem daft to spend as much on a controller as I did the entire unit – then let me know!

I’m also very much judging this by the price I paid for it. While it appears that Amazon US has run out of stock, and as such they’re a little more pricey again, I’m basing my observations around that price point.

It got me 40 games, and unlike those iffy Famiclones you get off AliExpress or Wish, they’re not all just repeats… sort of. Here’s the rundown of games onboard:

So while there aren’t any repeats, there are a lot of sequels, especially for fighting games. Then again, this is SNK, and it’s the fighting games that drew the crowds in, especially as it went head to head with the likes of Street Fighter II and Mortal Kombat at the time.

Also, I badly want to go back in time and teach SNK about the proper use of apostrophes. I’m still not sure what it is that the Ninja Master is holding.

Still, that’s a solid list for the money, coming in at just $1.28 per game, or just a few credits thrown into each. I use the term credits deliberately there too, because these are and were all classic arcade games, designed to siphon the money out of your pocket at a steady rate.

It’s not surprising that the third-party games that were also available for the Neo Geo are missing, but I would have gladly swapped out a few of the fighting game sequels for more variety. Where’s my Super Baseball 2020, SNK?

(Yes, I know, it’s hackable and folks have already added lots of games to it. I’ve not gone down that particular rabbit hole yet, not least because even if I did have an extensive library of Neo Geo games, that kind of game format shifting is entirely illegal in Australia.)

What about the hardware? It’s a cute little representation of a classic arcade cabinet, and while the LCD display isn’t super-crisp, it’s entirely up to the job it’s been handed. Video out is supported via a mini HDMI, but it’s worth noting that the visuals aren’t exactly designed with a large screen 8K display in mind. It’s also all kinds of weird trying to play with that joystick, so again a controller or two would be advised.

Button response is fair, and arguably a little better than the joystick, which is only average. That’s again down to the fact that it’s a modern analogue type joystick being put into service against games that were distinctly digitally controlled. I’m not the most keen player of many of SNK’s fighters, but there’s definitely a learning curve to using this particular joystick for those frame-perfect style inputs. I suspect the more dedicated types would have flipped to a controller rather rapidly – but then they’d probably own the original hardware anyway.

Power comes via USB C, and it’ll work off most phone chargers. You can even make it portable after a fashion with a battery pack, although the size and layout of the Neo Geo Mini isn’t going to make it an obvious choice for your daily commute.

There are some rough edges with the emulation, with only a few menu choices when you hit select and start at the same time. This is where you create save states, load them or adjust brightness and volume. I really would have preferred an actual volume dial I could physically hit when I wanted either silence or more sound. There is at least a headphone jack at the back if you want even more cables coming out of the Neo Geo Mini.

So was it worth it? I think so, but then my perspective comes back to those arcade roots, and the way I’ve always played these particular games. They’re designed for short bursts of play, not lengthy marathons.

I totally get that the purists who own many of these games already would have been disappointed, and I don’t know that even at a cheaper price they’d be happy. I get that, because there’s other platforms where I’d be righteously annoyed by poor efforts.

For me, though, I can fire up the Neo Geo Mini, blast away a few foes in Metal Slug, pretend to be a legally-distinct Godzilla in King Of The Monsters or thump a generic ninja in… well, just about every single one of the many fighting games present, but let’s say World Heroes for the fun of it, or play some simple arcade sports or action games for a few minutes, and then get back to my day.