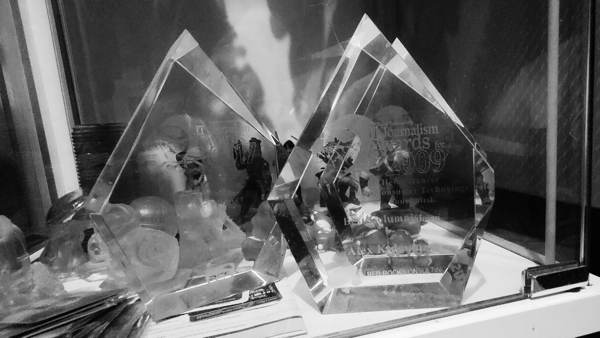 So, I’m largely writing this to take my mind off the pending American election, which I’ve been spending far too much time watching, reading and worrying about. Turns out there are other things happening this week, including the Australian IT Journalism awards.

The awards — which have a naming rights sponsor, so technically they’re the 2020 Samsung IT Journalism Awards, but they’re more informally known as “The Lizzies” — are, for better or worse, the local tech media industry’s equivalent of the Oscars.

The nature of 2020 means that they should have happened months ago, but were instead delayed and rescheduled to this Friday 6th of November. A glittering night of nights, slightly altered by social distancing. In my case, quite a bit — my own family circumstances mean I won’t be attending in person but will instead be watching virtually.

Apologies to anyone who I would otherwise catch up with on the night; I’ll be there in spirit  — and probably downing a few spirits along the way, because that’s also traditional.

So this year, I’m a finalist in the Helen Dancer Best Consumer Technology Journalist, Best Telecommunications Journalist (I’ll get lynched if I win that), Best Technical Journalist (which I won last year and ended up “singing”* Rebecca Black’s Friday as a result) and Best Reviewer (my key category pretty obviously).

Plenty of the publications I wrote for in 2019 — they’re the 2020 awards but for work written in the prior year, which is why they’re usually awarded in March or thereabouts each year — are finalists in their own right, as is Vertical Hold: Behind The Tech News, the podcast I produce weekly with Adam Turner. You should totally go and subscribe, by the way.

It’s nice to be a finalist, but I’ve been here before, many, many, many times. Then again, I’ve been a tech journalist for many, many years, which brings me on to my next point.

Winning is lovely, but losing is perfectly OK — and can be useful too

As I write this I have absolutely zero idea if I’ve won as much as a brass razoo.

That’s odd, because logically the judging happened months ago and the results have been sealed for way longer than would be usual.

Also, the traditional trophy has nothing to do with razoos, but it’s a lovely sounding word in its own right. Still, it’s not what I want to get at here.

It’s around this time — Lizzies time that is — that I tend to get involved in discussions with other journalists around the judging, the formats, the fairness and whether it’s all “fixed”.

Is it a perfect system, based as it is on peer review and voluntary judges? No, but we’re human beings, and perfect systems really isn’t what we do.

Equally it’s just not feasible to have absolutely 100% consistent judging year in and year out, although I’ve not really hit too many cases where I was left scratching my head about any one particular winner to speak of.

I’ve had years where, based on what I’d submitted I felt really good about my chances… and won absolutely nothing despite having more nominations than anyone else in the room.

That kind of thing can take a toll on the ol’ ego, for sure, and I totally get that perspective.

Here’s another one to chew on.

It took me a long, long time to win the award I wanted to

So, I first started nominating myself for the Lizzies back when they started, and my key category I wanted to win was Best Reviewer. Product reviewing has been the core of my writing career, and the recognition of your peers is indeed a very nice personal boost. That was in 2003. I didn’t win, but I was a finalist.

The same finalist status was true — I think without any years of interruption, but it’s been a while and I’m working off memory — in 2004, 2005, 2006, 2007, 2008, 2009… you get the picture. Year in, year out, didn’t win it, over and over again. I won Best Columnist, which was nice, and the Helen Dancer Best Consumer Technology Journalist award, which was even nicer given Helen actually interviewed me for my first technology writing gig back in 1998.

Now, in the early years of the Lizzies, PC User’s primary reviewer, Darren Yates won Best Reviewer an extraordinary number of times. I haven’t checked but I’d be pretty certain that he’s won it more than anyone else has in the history of the awards.

Darren was a great tech reviewer and totally deserving of those wins, and I got to the point where I’d joke with him pre-awards as to how he was going to win again.

He didn’t know if he would or wouldn’t, but he’d assure me that it was probably my year… and then he’d get up and win it again anyway!

Here’s the thing: While Darren isn’t as involved in the tech media scene as much these days — he’s largely a data scientist now as I understand it — he was a really good writer, and losing to him so many times was in itself instructional. I took those losses on board, and just kept on working on my own writing, learning as I went and slowly improving along the way.

Did I win the moment Darren stopped nominating himself? Not even close.

I did finally win — and I’ll be honest, it felt very good — in 2017, 14 years after the first Lizzies award ceremony and 19 years after I started as a tech journalist.

Over those years I worked and worked and honed my craft and (I hope) got better at it over time. Like just about any other writer I know I have huge moments of self-doubt and impostor syndrome — yes, even 22 years after I started as a tech journo — but then I’m reminded of something that Cass Warneminde (sadly no longer with us, RIP) — told me when I worked under him at ZDNet.

You never stop learning throughout your life, and you should never stop trying to learn.

Will I win anything this Friday? Maybe, maybe not. That’s not within my control.

What is within my control is what I do with that moment, win or lose.

*There is to this day some debate about the quality of my crooning. All I was going for was better than the original, and that is not a high bar to jump.