Posted in Opinion
Author: Alex  Published Date: August 1, 2017  Leave a Comment on Smash TV: Which version smashes all the rest? 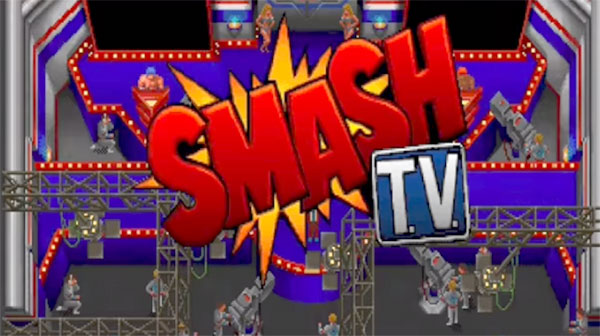 Smash TV is one of my all-time favourite shoot-em-ups, but which version is best?

Ah, the 90s. It was, as they say, a different time, when arcade titles still had a lot of relevancy when it came to creating console games, and indeed selling console systems.
Millions of gamers (myself amongst them) flocked to the Super Nintendo simply because it had a (damned fine) version of Street Fighter II, for example. That was one of the only examples I can think of, actually, where I bought an entire console system on the strength of just one game. But this isn’t about Capcom’s excellent fighter.

Nor is it about potatoes. Sorry about that.
Instead, I want to focus on Smash TV, which is what happens when you take the core concepts (and indeed the programmers) behind Robotron 2084, and make them watch The Running Man endlessly.

The Running Man: A reality TV show set in the future year of 2017. Hey, wait a minute…
The core conceit is that you’re in a “futuristic” game show, fighting for both survival and BIG prizes along the way. Also, everyone wants to kill you, and you die on contact with just about anything that isn’t a prize. Some prizes may be placed on top of land mines, just in case you thought this wasn’t fixed.
One of the features I adore about this game is how very particularly 90s the prizes are. One key “prize” (which is just worth points) is a brand new VCR. In the average game of Smash TV, you win thousands upon thousands of new VCRs. Bear in mind, this is a game set in the futuristic space year of 1999, so I guess they weren’t wrong there, but looking back from now, it’s just mildly funny. Or it makes me feel old. Probably a mix of both.
It also strikes me as interesting given that this is a game where you do shoot a LOT of human-looking enemies, given some of the hysteria around “violent” video games of the period. Somehow, Smash TV managed to dodge all of that, even though its genocidal tendencies would put Mortal Kombat to shame.
As with any arcade game of the era, though, Smash TV was ported, near endlessly to a variety of systems, with what I’ll generously call mixed results. Here’s where I’d rank them in terms of overall quality:

Oh dear. Oh my. The 8-bit Sega systems really got the short end of the Smash TV stick, and no mistake. It’s not just the question of single stick control on a dual stick shooter, although that certainly doesn’t help.

There’s a distinct lack of enemies, but that’s a game balance thing, because they’re very lethal, hard to avoid and hard to hit. Yes, Sega’s 8-bit machines might not have been up to the task of a full conversion that was arcade-accurate, but there are plenty of superb Master System/Game Gear games that work around the limitations to deliver superb experiences.
Then there’s Smash TV. Unless you only ever play Master System games (a worryingly limited life), opt for a different platform. Even if you want to keep it 8-bit console only, the NES version is superior, and it’s not too often that’s the case for 8-bit console conversions!

The 8-bit home computer ports of Smash TV surprised me, simply because I would have expected something awful, and they’re not quite that.

All of them punch above their weight in terms of delivering the arcade game given the limited technology. The Spectrum version may as well be magical given the limitations of that machine, and while the Amstrad version offers up the predictably round cartoony graphics that are the hallmark of that particular machine, the Commodore 64 version has to win the 8-bit computer crown, simply by dint of using two joysticks for shooting and firing. Managing movement and directional shooting with a single stick really robs Smash TV of much of its fun. Still, while (like so many 8-bit games of the era) they promised arcade accuracy and fun, they were limited in their ability to really deliver on those promises.

OK, time for a quick admission. I’ve never actually played the full arcade version of Smash TV.
Never even saw one back in the day, to be entirely frank about it, although I have played many of the effectively emulated versions of it via collections such as the excellent Arcade Party Pak for PSOne, or the Midway collections for Xbox and PS2.
I won’t lie; I’d still love to come across a proper Smash TV arcade system one of these days, although that feels like an almost impossible ask.

Of course, if one wants to be “correct” about it, the arcade game should be the “best” version, because it’s the actual original. The daddy, as it were, that all the other ports come from. It’s certainly hectic, and it’s a great example of a fine-tuned arcade shooter meant to be played in short, 20c piece burning bursts. But it, and the many versions created for systems that are easily capable of running an emulation of the code are most defintely not the best versions. Oh no.

Now, I will admit that this is the first version of Smash TV I ever played. I can even remember where I got it from, because it was procured as a second-hand title from the CEX store near Warren St Tube in late 1992, via a traded in copy of Populous.
It’s OK, SNES Populous. I do still love you, but I still got the better end of that deal.
However, it’s not just the rosy nostalgic filter at play here. I really do think that the SNES version, programmed right here in Australia by Beam Software is the best version of the game, and for one very simple reason. The arcade version is the progenitor, no doubt, but it’s also a game created for the arcade, which means it’s very fast and often unfairly hard. After all, the sleazy dude who ran the arcade (you know the guy, right?) wants to make his money out of you.

The SNES couldn’t quite handle that pace, so it’s an ever so slightly slower and fairer affair as a result. It’s still fast enough to be fun, but it’s also a game you can learn and enjoy, and one you can throw a second player into without them feeling lost in any real way.
The Megadrive version should be just as capable, but the default 3 button pad means it doesn’t control as well, or look as good. The SNES pad is ideal for Smash TV, even though that’s just a quirk of design fate.
Although, to be clear, while the SNES version is a touch slower than the arcade, I will still steal all the toasters and VCR prizes if you’re not quick enough. It’s contestant eat contestant in the rough and tumble world of Smash TV, mate!
The slower pace makes for a better home game, and one that’s much more fun to play over an extended session. Yes, you could grab, say, MAME or one of the emulated legit versions and pump simulated 20c pieces into it until you finished it, but because it’s designed to eat money, it loses some charm.
The SNES version instead gives you a set number of continues, hard but fair, and challenges you to go for it. The result is one of the best SNES shooters of all time, and easily the best version of Smash TV in existence.