Posted in Humour
Author: Alex  Published Date: May 7, 2019  Leave a Comment on Which way would Godzilla vote? 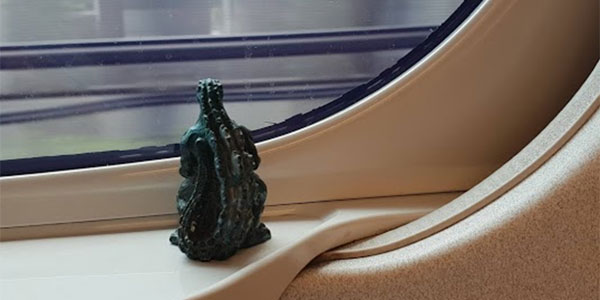 In which I totally overthink Godzilla’s likely political position. You have been warned.

Earlier today, I got into a ridiculous discussion on Twitter. This only happens, oh, let’s say, maybe 30 times a day, but in this case, it was a response to a Tweet by one of the Australian media community’s more interesting writers, Stilgherrian.

He was querying who should headline the Liberal party election launch on Sunday, which meandered (as these things do) to Godzilla.

With my long-standing interest in Japan’s favourite scaly son, I felt compelled to break into the conversation.

No way that Godzilla is a Tory. He's rather keen on smashing the state.

But since then, in my usual style, I’ve been overthinking it. Badly.

I’ll blame the fact that we’re in the middle of an election cycle here in Australia, so the political advertising is utterly relentless.

So with that in mind, I started to think.

There are some pretty big issues with Godzilla casting a vote in the Australian Federal election 2019.

We’d need an especially large cardboard polling booth, the stubby pencil would need to be the size of a full-grown eucalyptus tree, and teams of scouts would need to start cooking a Godzilla-sized democracy sausage right now to meet his post-voting needs.

But, for the sake of argument, let’s say that these were solvable problems.

Godzilla’s not a young lizard any more, and at 65, maybe he’s retired somewhere where there’s lots of tasty uranium for him to snack on in his dotage.

It would, of course, be breaking with all kinds of democratic safeguards to actually peek at his voting form, but at that size, it’s pretty inevitable. So which way would he vote?

Let’s look at the options:

Somebody’s got to dig up the uranium: Godzilla thrives on nuclear energy, and it’s not like the Greens are going to offer him a tasty plate of uranium, now are they?

He’s arrived by the sea: The LNP isn’t keen on that kind of thing, except as a fear-mongering campaign. Good luck locking Godzilla up on Nauru!

He’s not particularly rich: Franking credits aren’t much use to him.

Broadly pro-environmental: Want to annoy Godzilla? Do something to harm the environment. Yes, this does point him more towards the Greens, but at least Labour is a step on the way.

Bill Shorten takes on Space Invaders… or Galaga: Look, Godzilla’s taken on so many alien invaders now, he gets how it’s easy to get them confused. It’s still a policy position Godzilla supports.

He’s a pretty individualistic monster: While he briefly unionises with some Kaiju — mostly Mothra — this never lasts. He’s never going to be happy with the Labor caucus.

Colour sympathy: Sure, he’s sometimes grey, but ask anyone what colour Godzilla is, and, well…

Environmental cred: They’re the Greens, he’s a sea monster. Can I make it any more obvious?

Pro-diversity: Look, Godzilla is mostly referred to as male… except when she isn’t. In terms of party support, that’s the Greens more than any other party, and by a pretty wide margin.

No Uranium cookies before bedtime: Nuclear power isn’t on the Greens agenda, but it’s pretty important to the premier Kaiju. Indeed, it’s the reason for his creation, and he has a long memory.

I mean, Pauline Hanson rather famously doesn’t like the idea of an Asian invasion. That’s exactly what Godzilla is.

Mini Godzilla is more likely incinerate his house of reps form in an explosion of rage than vote One Nation.

Not the Senate paper, of course. There’s a size limit to Godzilla’s destructive powers.

Yes, this is satire. No, no political party has authorised it in any way. Also, I’m ignoring that very rich businessman with the yellow billboards, and quite deliberately so.