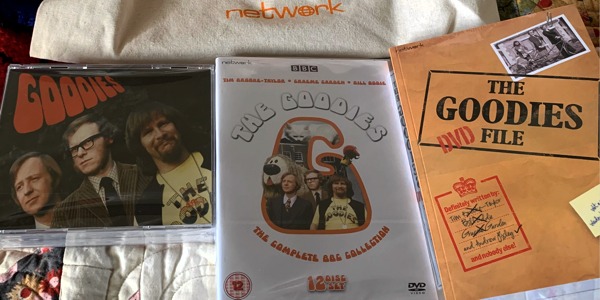 Goody Goody Yum Yum… indeed. At very long last, all of the BBC episodes of classic 1970s comedy series The Goodies can be yours — but if you’re in Australia, it might be tricky to get.

A rough day today, but I got home to something very special on my doorstep, direct from the UK.

The Goodies: The Complete BBC Collection arrived, and in its special edition form with a bonus canvas bag, booklets that are in fact books in their own right, and a bonus CD of the studio recordings of a quantity of the music.

Like many Australians my age (or thereabouts), I’ve got a lot of fond memories of The Goodies. Simply put, they were HUGE in Australia. A hit in their homeland at the time, to be sure, but an enduring classic down under.

I’ve attended Goodies conventions, I’ve seen the stage show tours that Tim & Graeme did (at first, with Bill appearing via video link), and even Bill’s slightly less entertaining Aussie tour. I’ve even got a signed original shooting script lurking away as one of my very prized possessions.

There have been Goodies DVDs previously, but outside the less-than-stellar complete LWT series, it’s only been in two “best of” collections, rather than everything at once. Of note, this is just the BBC shows; if you do want to be completist, you’d best pick up the LWT shows, and maybe even stretch out to the complete Bananaman collection too.

No, I haven’t had time to watch all 2,040 minutes yet. I don’t binge watch stuff, remember? But still, when you make a show for 10 years straight, you make a lot of episodes.

Then again, I kind of don’t need to, because I’ve never really stopped watching The Goodies anyway. It’s great to have the whole run, including lesser-seen episodes like The Playgirl Club, although it’s still in Black & White and is rather emblematic of some of the comedy that hasn’t aged well.

There’s an attempt to be subversive with a flipped gender role for the Minister in that one (the marvellous Molly Sugden) and women lusting after men, but the audience reacts loudest to the sexist stereotypes, and especially an extended sequence of looking up ladies’ dresses… oh dear. It’s rated 12, and that’s largely because the original shows went out at 10pm at night, including some straight up nudity gags. Some of those got cut for their ABC 6:30 broadcasts (if they were shown at all), but they’re present here in all their naked glory. They’re not the best jokes, however.

The thing is, it’s not all like that, even though there are jokes that now fall flat. The show evolved, and even pushed boundaries (social justice, trends, apartheid) while still retaining its childlike charm and outright sense of slapstick.

That remains funny — and not just for me in a nostalgic sense, but also for my offspring, who can appreciate the physical aspect even if jokes about Tony Blackburn are historical relics.

The content is presented as clean as it realistically could be. There’s been no work done in recolourisation of those episodes that only exist in Black & White, and of course the original version of “Kitten Kong” is lost — sliced apart to make the Montreaux entry version which is what you get here instead, although the box does note that they’ve regraded colour episodes where they can, including reinserting censor edits held right here in Australia into the original episodes!

Extras on the box set (I pre-ordered the special edition, which, sorry, you can’t get any more, although I imagine some will pop up on eBay or similar at some point) are limited to subtitles, and a very nice sofa hour chat between Stewart Lee and all 3 cast members going through the show’s creation and legacy shot in June 2018.

Time gets to us all, and it is something of a jump to go from episodes shot in the 1970s to the three much older Goodies, but they’re still as sharp and funny as ever. Just don’t ask them to take a pratfall, because they might not get up again.

Annoyingly, it doesn’t appear as though there are any plans for an Australian release even of just the disc edition. If I’m wrong about that, can somebody let me know? I can’t see any sign of it in the usual places that would sell or offer pre-orders of it as yet.

It exists, of course, on Amazon UK, but the contraction of Amazon services in Australia would mean you’d have to use a shipping agent to get it. Boo! Hopefully it’ll be picked up for release here, although it’s worth noting it’s not cheap. The UK price for just the discs is £59.99, which would equate out to around $110. I ordered mine as a pre-order through Network TV, and this link may work for you.

This is a show that the BBC famously didn’t repeat much at all, despite its superstar status in the 1970s.

It was bigger than Monty Python with wider crossover appeal, top 40 singles (Bill Oddie has a great quote about singles in the discussion panel that I won’t spoil here) but once they were cancelled by the BBC (and after the quick, disastrous hop to LWT) they were all but ignored, sadly.

The shows don’t stream, and in any case, it’s a show I’d very much like to have at my disposal to watch, rather than hoping it’s still on a streaming service when I feel like a quick dose of Ecky Thump or Kitten Kong.

6 thoughts on “The Goodies: The Complete BBC Collection Review”