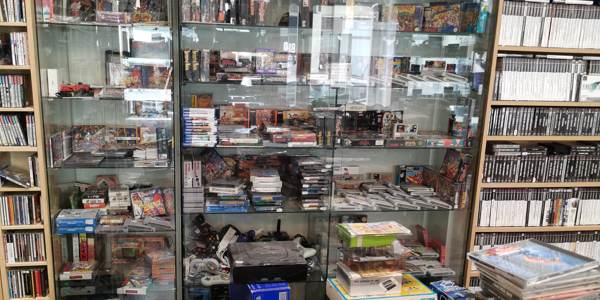 Because you’ve got to do something once you’ve seen the Eiffel Tower.

Paris is a wonderful city, full of culture, history, charm and of course lots of really great wine.

A few months ago, I travelled to Paris for business purposes. With a full disclaimer in mind, I went there as a guest of Huawei for the launch of the Huawei P30 Pro. I can’t read the minds of Huawei executives, but I think it’s a fair bet that they weren’t doing so in order for me to trawl the retro game shops of Paris. Call it a hunch if you will.

I should also point out that I didn’t explicitly go out of my way to speak of to do any retro shopping.

Indeed, one of the locations I walked past because I was walking with a group heading to a death metal store called — and I’m not making this up — Music Fear Satan. What’s more, it featured the Die Hard 2 soundtrack prominently in the front window.

I know, you’re finding that hard to believe.

So of course I have proof.

Anyway, not too far from there resides the aptly named Retro Game Shop.

Gee, I wonder what it sells?

Retro Game Shop isn’t huge — basically a single room of stock — but it exemplifies a style of retro game store that I love to simply browse, because just about everything is on display.

Not so great I guess if you have really specific games you’re chasing after, but fantastic for those serendipitous finds.

Actually, even if you are after something specific, you could always ask. I chatted to the proprietor for a little while as he bagged up my purchases in a mix of my terrible broken French and some English, and he was perfectly happy to find games for me if I asked.

A lot of games don’t have prices on them if that annoys you, although it didn’t affect too many of the games I picked up.

One quick traveller tip here: Learn some basic language for ANY country you travel to. Most folks are pretty obliging if you make a small effort, whereas assuming everyone will speak English or getting exasperated when they don’t is essentially just rude.

Pricing is… well, look, I’ve written about this kind of thing before. The reality for any retro game store in an online age is that actual “bargains” are going to be few and far between. I mean, why would you sell off your stock cheap in store when you can get more for it online?

That being said, the prices were fair, and I walked away pretty happy.

One caveat here is that Retro Game Shop’s opening hours are rather precise; Mondays 2:30pm to 7pm, Tuesdays, Wednesday, Friday and Sunday 11am to 7pm and not at all (as I read it) on Thursday and Sundays.

I’m working on the theory here that the owner has some other enterprise that they work on those days. Or maybe it’s mostly online.

I’ll admit, the name caught me by surprise. If only because it’s the same as one of my favourite Tokyo game stores, although I think that’s at most a question of homage rather than franchising.

Retro Game Shopping in Tokyo: Where to shop and how to save (if you can)

Retro Game Shopping Japan 2018: The Good, The Bad & The Expensive

Trader is a far more organised store than Retro Game Shop is. It’s not just retro gaming content either. The downstairs area is your standard current console fare if that’s more your style. Retro game fans should head upstairs to find games quite beautifully arranged in cabinets.

Although that does limit the amount that you’re going to “browse” them. It’s a delicate balance, but I will admit I like being able to handle things I’m going to buy first. Is that just me?

One interesting aspect I hadn’t considered before was the language barrier. These days, it’s not unusual to see multi-lingual options on games, but back in the day it was far less common. That’s not going to be an issue for, say, a shoot-em-up, but what do you do for more text-heavy fare such as RPGs?

The answer is a ROM hack, and Trader had more than a few of those on sale. Interesting to see in a full retail store, but it’s not as though they “exist” in those language forms otherwise.

My time was rather more crunched than at Retro Game Store, so I didn’t actually end up buying anything in Trader, although I was sorely tempted.

Sadly for me, the pressing need to actually fly back home limited my adventures there. A little light research suggests that there’s probably more retro gaming goodness to be had on the fair streets of Paris.

Now, you REALLY shouldn’t just go to Paris to go shopping for old video games. It’s an amazing city rich with sights and sounds, which you should totally take in while you’re there. Make retro part of your journey — but not all of it.