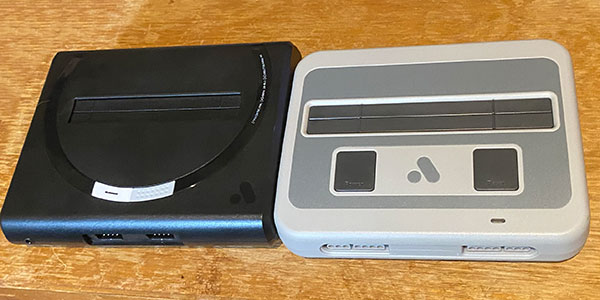 Analogue’s retro consoles are great, but they’re not cheap to acquire outside the US. Are they worth buying if you live outside the USA and have to pay the hefty shipping charges? My full video and text review await!

A little while back, I finally took the plunge and ordered Analogue’s Super NT and Mega SG consoles. For those not in the know, Analogue specialises in “new” versions of classic retro gaming consoles, with a specific focus on using FPGAs (Field Programmable Gate Array) to provide extremely accurate emulation of their core consoles. For the Super NT that’s Nintendo’s classic Super Nintendo, while the MegaSG runs Sega’s competing Megadrive (or if you must, Genesis, sigh) games.

Now, while they’re ostensibly not that much bigger than the Super Nintendo Mini or Sega Megadrive Mini, these aren’t boxes that are all about cramming in 20 or so titles that could be licensed, but instead pitched towards the retro crowd that already has a library of actual cartridges to play on them. That distinction is quite vital, because the two consoles are relatively pricey, especially once you take international shipping into account.

I ordered mine direct from Analogue, and to Australia there’s only one shipping option available. Now, to its credit it was almost frighteningly quick. I ordered late on a Thursday (Australian time) and both consoles arrived early on the following Monday, having shipped out from Texas and presumably dropped onto the first available plane heading out.

The two consoles run $US189.99 each (roughly $270), but on top of that, shipping was an additional $109. I totally get that shipping at that speed costs serious money, but there’s no option for slower shipping if you’ve got more patience. It’s entirely feasible it may be cheaper to ship just the one console, but I was treating myself at the time 😉

Of course, the question for that kind of outlay has to be whether they’re worth it, and it’s a complex question to answer.

The whole point of either system is that you get accurate emulation, lots of options when it comes to matters such as scan lines and visual representation and of course direct HDMI for best possible visual quality.

I absolutely cannot fault either system for this; the above video review is full of samples you can check to see what the Mega SG and Super NT can do with games that are approaching 30 years old with dizzying speed.

I’ve really only hit one very minor problem overall, and that’s using the Master System adaptor to play those games on the Mega SG. My copy of Bubble Bobble intermittently crashes, which is obviously a tragedy, but I can’t say for sure that the same thing wouldn’t happen with one of those old school Megadrive to Master System converters either; I simply don’t have enough experience with that kind of passthrough tech.

However the overall value picture does again come down to having the actual carts to hand. Now, I’m aware that folks have hacked Analogue’s firmware to run direct ROMs, but I think that’s rather beside the point for this hardware. If you want that approach – and I have to point out that copyright law in Australia, where I’m writing this makes it illegal even if you do own the original carts then you may choose to emulate directly on a PC or set up a Retropie system or similar.

However what I’ve found, and where the real joy in either console sits is in selecting a single game to play. You don’t get that with emulation, because most folks set up systems with thousands of available games – at which point you’re almost always either paralysed with choice or unlikely to settle on just one game to play.

Taking it back to putting an actual cart into a system removes that problem, and I’ve found myself playing more of games I’ve owned but underplayed for decades, simply because by putting them into the Super NT or Mega SG I’ve committed to playing them. It’s why I mentioned Decapattack in my roundup of 2019’s best games over at Kotaku Australia, for example.

So where does that leave either console? The hardware is great, I actually like the design a lot – as long as you don’t go for that horrid US design for the Super NT – and the output is superb. However, it’s definitely the case that it’s a pricey option if you’re not already in possession of a decent library of actual cart games to play on them.

Having said, that, have you seen the price for genuine Super Nintendo or Megadrive consoles recently? It might not take much for the Super NT or Mega SG to become the cheaper option overall even if you were only starting to build out a library of games.

Now if you’ll excuse me, I’ve got some games to play.