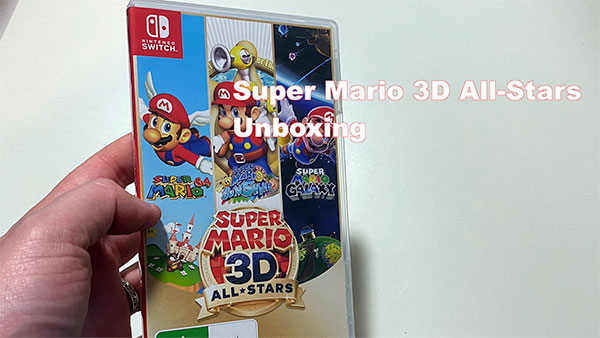 While I pre-ordered the physical edition on day one, I kinda didn’t expect it to actually show up on launch day, what with the way the world is right now. But it did, and so here’s what was in the box with Super Mario 3D All-Stars.

Yes, the audio and video aren’t top-notch — because I didn’t expect to be shooting this, and more or less did so on a whim with a review phone I’m testing out at the moment anyway.

Super Mario 3D All-Stars is of course a compilation of 3 of Mario’s 3D adventures, and in one respect the longest sequel gap for a Mario game I suspect… ever?

Super Mario All-Stars came out for the Super Nintendo in 1993, some (gulp!) 27 years ago, while this one hoovers up Super Mario 64 (Nintendo 64), Super Mario Sunshine (Nintendo Gamecube) and Super Mario Galaxy (Nintendo Wii) into one tiny cart. I suspect nearly everyone has played Super Mario 64, and lots of folks bought the Wii so Galaxy is well represented, but Super Mario Sunshine is an oddity for many. Although I loved the Gamecube, both back in the day and still to this day, so there’s that. I mean, who else ever bought out a purple console on day one?

(I guess Prince would have, if he’d ever produced a gaming console.)

It’s probably not a mushroom-flavoured cart, although reportedly Switch games do taste terrible deliberately. No, I’ve never tested that.

Obviously the Switch is not a Nintendo 64, Gamecube or Wii, and this does open up the question around emulation and quite what Nintendo will do after Super Mario 3D All-Stars. But that’s a problem for another day. If you’ll excuse me, I have some Mario games (that I already own on consoles I still have plugged into the TV) to play…