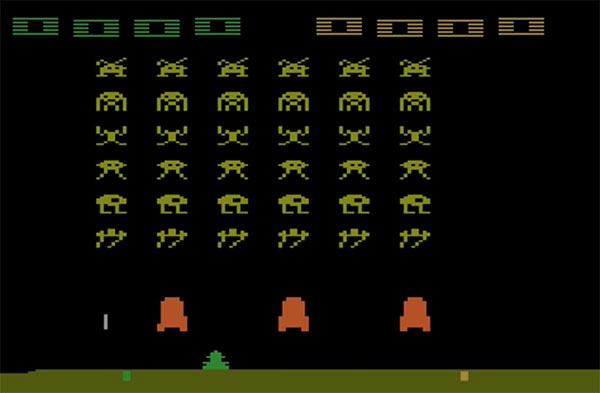 Space Invaders is a classic. Nay, it is the classic. But in its Atari 2600 incarnation, is it still any fun to play in 2016?
Space Invaders, as you probably know, was created by Tomohiro Nishikado way back in 1978, which means there’s decent odds that it’s older than many of the folks reading this. Also, just writing this makes me feel even older. That’s a side effect of writing a weekly retro games challenge post I hadn’t banked on.
For those coming in late, I’m going to play one retro game a week for the next year; everything from every platform is up for grabs, as long as I own a physical copy of it. I have, at a conservative estimate too many games, so choice is not going to be a problem, and you can vote on what I play next at the bottom of this piece.
Retro Gaming Challenge Week One: Shin Nippon Pro Wrestling: Toukon Road 2: The Next Generation (N64)
Retro Gaming Challenge Week Two: Donkey Konga
Retro Gaming Challenge Week Three: The Firemen (SNES)

Mention the Atari 2600 to people, and a vision of clunky joysticks and block-centric visuals usually emerges. From that limited technological base, can any game stand up to modern scrutiny?
Before I answer that question: Gary — hit the music.

Ah, I needed that, somehow.
Playing Space Invaders for the first time in a while reminded me of a few things. For a start, my 2600 is on its last legs; the poor thing will power on, and games that start with a press of the fire button, rather than a tap of the reset switch are fine to play. Space Invaders isn’t such a game, which meant that rather quickly I had to switch over to playing on the 7800, which reminded me of its somewhat weird origins.
You can read that story here, if you’re keen.

I can’t say with any accuracy when I played my first game of Space Invaders. That’s a memory lost to the mists of time, but what I can recall with startling clarity is the first time I ever saw Space Invaders. It was at a caravan park in Nambucca Heads on the New South Wales north coast, and I would have been less than ten. Young kids don’t often have much spending money — and if they do, they typically don’t have it for long — so I didn’t have any money to play the limited selection of arcade games that were on display. As was (and is — I’ve seen my own kids do it) the habit of youngsters everywhere, there was still fun to be had with attract sequences and a little imagination, pretending I was playing the game like the big kids were.

Not everyone was back in those days

It wasn’t the alien decals per se that put me off. It was that steady, rhythmic heartbeat, thumping its way through the room. It actively scared me at the time, and even now it can get my heart racing. The 2600’s hardware isn’t quite up to the task of mimicking a human heartbeat, instead substituting a chirpy, almost typewriter style sound. Except for the last alien, who sounds like the rest, only on WAY too much coffee.
Playing Space Invaders on the 2600 also reminded me of how important the quality of the controller is in determining the overall gaming experience. Everyone has their personal favourites — I’m a big fan of the Saturn Nights controller, for example — but there are few controllers that are genuinely as difficult to get to grips with as that original Atari joystick.
I’m sure it has its fans. I tend to think that they might have slightly twisted claws for appendages after decades of wrestling with that too-stiff joystick and semi-responsive button, but maybe not.
In any case, the one “luxury” I allowed myself this week was to use the 7800’s controllers rather than the 2600 joystick except in multi-player games. There, I suffered like I would have, stoically and with many deaths.


One cute aspect here; according to the 2600 instruction manual, I’m firing “laser blasts”, but what the aliens are dropping on me are “laser bombs”. Aren’t bombs meant to explode? Sure, my tank does when it (regularly) gets hit by incoming fire, but I’d expect that just for being hit by a laser. Anyone got any research funds they’d care to fling my way so I can test out the effects of lasers on tanks? I promise not to scorch too many otters (this time).
Ahem. Back on track, Kidman. Space Invaders always was a game about the futility of war and man’s place in a hostile, uncaring universe high scores above all else, so once I’d familiarised myself with the basics of Space Invaders — move left, move right, fire, don’t get hit — high score chasing and a little light multiplayer very much defined my week of gaming. Scores started out rubbish, barely clearing 2,000 points, but matters improved as the week progressed.
Naturally, there’s no such thing as a high score table to be seen, so I had to go properly old school and write my high scores down on a sheet, crossing them out as each score was broken. For the record, after a week of play, my meagre high score was 6,245. It turns out that Space Invaders is a game I play almost hypnotically, but if anything at all distracts me, I tend to wander into enemy bombs like they were giving away free cheesecake.
Gameplay tip: Alien bombs rarely, if ever, give away free cheesecake. Learn from my mistakes.

Space Invaders also supports multi-player gaming, because back in the 1980s, the price of a game meant that you really needed to do that kind of thing. It’s rather comically unfair, however, not just because in my setup the second player was always on the flaky old 2600 joystick, but primarily because the second player’s tank is almost ludicrously fat compared to the slender beauty of player one’s vehicle. Well, as slender as a couple of boxy pixels can manage, anyway. Bear in mind that just downloading “Space Invaders” on this webpage once took up more memory than the entire game* does.

Space Invaders for the 2600 is also notable because of the slightly ludicrous quantity of variations the game offers up. 112 in total, which sounds insanely impressive for a game that was released in 1980. In some ways it is, and in some ways it isn’t. It’s a testament to making a lot out of a little, because those variations are made up out of a matrix of relatively few choices in either single or multi-player combat. There’s some value there, but a lot of it is rather fleeting. Playing against invisible invaders, or invaders with moving bullets has small, party game style fun, but it’s nothing that you’ll do for any extended period of time.

That kind of economy of scale plays through in other areas. If the mothership is present, your current score isn’t, because there aren’t enough lines of resolution and memory to handle it. If the invaders get too close to what used to be the moon but is now the Earth, because why not have more peril, your protective shields simply vanish. All totally understandable within the constraints of both programming and technology of the time, although there are a LOT of hacks for this particular game, including some that insert the “proper” sprites. All clever stuff, but in some ways the charm of the 2600 version is very much that it’s the 2600 version, warts and all.
Does Space Invaders still stand up? If you’re happy with high scores, there’s no reason it shouldn’t stand up beautifully. My own kids (who are, to be fair, rather au fait with my retro gaming tendencies) joined in on more than a few multiplayer games. I dutifully chased high scores all week, and outside of intermittently cursing the 2600’s joystick, I had a lot of very simple fun doing so. It’s not exactly a cheap cartridge right now — for some reason, Atari 2600 stuff has jumped up in eBay asking prices of late, although I suppose there is that whole “it’s nearly 40 years old” factor at play there — but there’s still some solid fun to be had.
Next Week:
The last round of voting was for a Sega Saturn game to play as next week’s challenge. To be honest, I rather expected Nights Into Dreams to walk it, but there was genuinely stiff competition between all three contenders, counting comments made to me via Twitter, Facebook, gaming blogs and one in-person vote that saw all three contenders looking likely.
In the end, though, by a very slim margin indeed, the title I figured would poll the worst just tip-toed over the line, so next week, I’ll be playing Three Dirty Dwarves, a game which by title alone would have trouble getting made these days.
While I’m doing that, though, you can vote on what my gaming challenge for the following week will be. I’m in the mood to keep it on a single system again, so we’ll dip into Sega’s long-time rival (and now publishing partner) Nintendo, with a choice of NES-era games. Specifically, you can vote for me to play

Poll removed, because this was YEARS ago

*An untested exaggeration for comedic effect, but probably not too far off the mark.