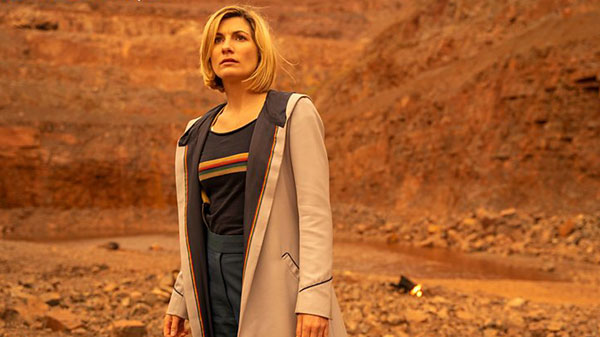 It’s time to wrap up the season — and give my final rankings of all the episodes — with The Timeless Children. Warning: Spoilers lurk within.

Before I start, it’s traditional for me to offer up some spoiler space to the gods.

Or, to be more accurate, some spoiler space to those who may have clicked on this review before seeing The Timeless Children. My reviews don’t hold back on the spoilers, and this episode, more than any other this season is packed full of lots of details I simply can’t dance around for the sake of avoiding spoilers. So if you go past the YouTube video, I’m taking it as consent to get fully spoilery.

Well… that was a hell of a ride. I can very much see The Timeless Children splitting fandom far more than anything else that Chris Chibnall has attempted during his time as Doctor Who showrunner, because he certainly didn’t hold back in terms of rewriting some key parts of the TV show canon.

I’m leaving the book/audio/videogame/etc canon out of this equation, mind you, although I did write up something of a side thought on some obscure callbacks over at Gizmodo in the episode.

But if The Timeless Children is going to split fandom firmly down the “It was superb” and “It was irredeemable rubbish” lines — and I can already hear the rumbling of a million different fan opinions clashing as I write this — then I guess I should make my position clear on the big moves in this episode, which ultimately are ones that affect The Doctor herself.

I’m OK with them. There are some structural issues with this episode that I wasn’t entirely satisfied with, but if your ire is raised around the more central role that The Doctor now plays in Time Lord history, I don’t quite see it, for two very simple reasons.

Firstly, there’s the fact that The Master clearly has control of The Matrix, and, as we’ve seen before that means that he can flat out lie. Future writers could retcon the whole idea so fast it would make Alpha Centauri’s eye spin, but I don’t think they’ll do that.

Instead, I think it rests on the discussion that the Doctor has with Doctor Ruth, and the realisation that finding out something about your past does not in fact define who you are in the future. Are there stories of The Doctor that even she doesn’t know about? Sure, it creates that possibility, but in the exact same moment it makes it clear that it doesn’t entirely matter in terms of the person that The Doctor has chosen to actually be.

So, with that out of the way, it turns out that the actual episode itself follows a very simple structure. The Doctor and The Master head to Gallifrey through the mysterious Boundary, which I could have sworn was meant to open to a different place every time last episode but now seems stuck on the Citadel, while Ryan, Graham and Yaz deal with — and don’t deal with — the incoming Cyber-invasion.

Half-converted Cyberman Ashad ends up basically being the Master’s pawn, both figuratively and literally once he’s shrunk down to size, and I’m a little surprised that the Cyberium didn’t warn him about The Master. If nothing else, they crossed paths in The Five Doctors, although I guess there’s an argument that the Cybermen in that story weren’t able to transmit anything back to central cybercontrol while they were stuck in the Death Zone.

Sascha Dhawan is really growing on me as The Master too, although the strong focus this story gives him does show a few cracks in his performance. Possibly dialling back the John Simm-style cackling a little — which worked very well for Simm but doesn’t come off as quite so creepy when Dhawan does it — and he’d be truly excellent. It’s certainly believable that he’d be royally pissed off discovering that he’s essentially part “Doctor”, given how the bond between them has always been based on how he’s the absolute opposite of the Doctor.

It also probably hurts knowing that he’s got 12 regenerations only — though he has skipped through that a few times — but The Doctor appears to be effectively immortal as far as we can tell.

And ultimately it’s Jodie Whittaker’s performance, aided by Jo Martin’s surprise reappearance that makes this episode work. Whittaker’s acting choices are very subtle here, moving from anger at The Master through to realisation and ultimately acceptance, and I’m here all day for that kind of quality acting. I could be slightly miffed that the “everything you know is a lie” turns out to be “The Gallifreyans got their regeneration powers from elsewhere”, but ultimately I’m not, and a lot of that comes down to how well Jodie Whittaker handles the Doctor’s acceptance of her backstory here.

Which is not to say that there aren’t problems with the story.

I totally and absolutely cannot understand why Ashad can come literally eye to eye with humans hiding in Cyber-suits and not realise that they’re human. Sure, it’s a nice jump scare moment in itself, but it doesn’t stand up to any kind of logical scrutiny.

Equally baffling; I get why The Master goads The Doctor with the Death Particle and the bomb simply to see if she’ll use it, because it’s an exceptionally Master way of looking at the world.

I don’t get for a second how and why he simply allows Ko Sharmus to walk in and grab the exact same weapon from the Doctor, let her escape and only THEN think to perhaps shoot him? One blast from the tissue compression eliminator as he’s coming in down the stairs and the Master wins without exception.

Still, this was a fun ride, and that’s what I want out of Doctor Who. Well, that and no more episodes like Orphan 55, anyway.

Random thoughts and observations (there will be a few of these)


And until we get Revolution Of The Daleks at either Christmas or New Year’s Day, that’s it for Doctor Who in 2020. Which means it’s time for me to make some hard decisions about the rankings of every episode of this season. As a reminder, you can click on the link for any story to read my thoughts on that particular episode, written week by week as the series progressed.

Yep, I changed around my order quite a bit once the entire season was said and done. The Timeless Children was fun, but it wasn’t quite as enjoyable as The Haunting Of Villa Diodati, even though that story effectively serves as the first part of the finale 3 part sequence.

However, that means that they all interlock, and in doing so, I’ve got to judge them by the qualities that bind them. What that means is that Nikola Tesla’s Night Of Terror jumps up in the rankings to take top spot, ahead of the 3 parter season finale in the order that I think it works best. No, that’s not the order you should watch them in. That would be deeply confusing.

That also slightly shifts everything else in the field down, although overall it’s remarkably close between almost all the stories this season.

Well, except for Orphan 55. Let us never speak of it again.

Next time: Revolution Of The Daleks. At some point in the future. Our future, that is, not The Doctor’s. Although maybe it’s both.