Posted in Personal
Author: Alex  Published Date: December 13, 2018  Leave a Comment on No more staring at her picture 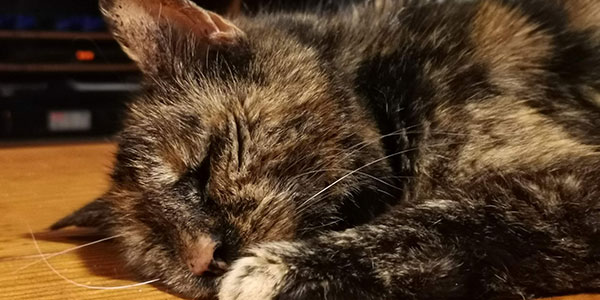 Every day I’ve come home this week, I’ve been missing something.

Not one of those “what have I forgotten” feelings, but a member of the family.

Last weekend, I had to say goodbye to the last of the cats we got as housewarming presents we got when we moved into our current home, nearly 2 decades ago.

19 years is a pretty good run for any cat, but then, Lita wasn’t just any cat.

I’ve told the story of how we got our cats before — when Guess sadly passed away, a story which is the most personal in Fifty-Two  — and it was less than 6 months ago that we said goodbye to Harriet too, leaving Lita a somewhat confused cat wondering where all her sisters were hiding this time.

Not that she didn’t check carefully where her sisters were, because if there was a word that I’d use to describe Lita, it would be intelligent.

I’ve known a lot of cats in my life, but Lita was easily the smartest. Combine that feline cunning with a more-than-healthy appetite, and Lita was the reason why we had to put latches on food cupboards — because she worked out how to open them — and always had to swiftly dispose of chicken bones if we’d had a roast chook in the house.

Lita lived all but a very short period when we had to move out due to tree damage in the same house, as an indoors animal, and she liked that very fine indeed, thank you.

Alongside her impressive intelligence was what I can only call agoraphobia to an extreme extent. Lita hated going outside, because why would she want to leave where her comfy sleeping spaces and food were?

Instead, Lita could typically be found near one of our large front windows, staring out into what we quickly dubbed her “picture”.

Lita knew what should be in her picture and what shouldn’t, and that included any other cats that might come calling.

They were swiftly growled at by a cat that could, had she wanted to, been a fearsome fighter. While she was overweight for much of her long life, she was also a big and muscular cat underneath that, but with a genuinely sweet disposition.

I got used to seeing her perk up when I’d get home, because she would “see” me in her picture, and that wasn’t “right” either.

I was part of her household (as was the rest of the family) and we should be inside, patting her or giving her chin scritches. Or, where feasible, bits of cheese.

Sadly, time caught up with Lita, and her older body simply couldn’t take it any more.

I held her paw and scritched her chin as she purred and passed away.

Since then, I’ve been saddened by the fact that I will never again come home to see her peering out at her picture ever again.