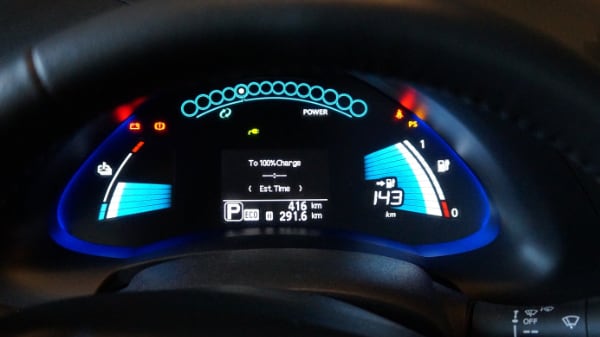 It’s taken a while (for reasons) but here’s my review of my imported Japanese 2016 Nissan Leaf.

Yeah, yeah, I know. I said I was going to write this some weeks ago, and I very much was. Then life got in the way, as it so often has the habit of doing.

If you’re new to the series, you should probably start at Part 1. It’s OK. I’ll still be here when you’re done:

So, I’ve now had the car that is formally known as Catweazle around these parts (because, you see, it runs on the electrickery) for basically a month now, which has given me plenty of scope to test out how it runs, how I’m able to charge it and what I like (and don’t like) about its operation.

Not quite that bad, space puppy.

I’m certain they’d have differing perceptions, biases, opinions, needs and frameworks to build a review around, and what’s more, they’d be writing for an audience interested in lots of car reviews.

I did mention I’m not particularly a “car person” before, right?

My intent here is more to highlight what I, as a regular consumer who needs a vehicle to get from point A to point B finds good AND bad in the 2016 Nissan Leaf.

I’m a firm believer in being critical in reviews, because like any other product, this car costs money that could be put towards anything else at all, and needs to justify itself. I’ve gone down this route because there really aren’t any affordable EVs in Australia yet, and it’s not even close.

Also, there’s a few details I’ve noticed that aren’t always covered in what I could read up myself before purchase that are worth highlighting.

If you’re an old hand in the EV space you may find some of this blindingly obvious.

If you’re somebody who thinks that EVs are coming to “ruin your weekend” and that you’d never buy a car that didn’t run on petrol or diesel… well, I think you’re sticking your head in the sand at this point in time, but whatever. Take from the review what you will.

The 2016 Nissan Leaf I’ve bought is a second-hand car, and that does involve a level of risk to be sure. I could have wished to not have the stress around the EVSE dying on me, but I’m also struck by the fact that the one thing that’s gone wrong so far was on the newest bit of technology I got with the car. The vehicle dates from 2016, but the EVSE was brand new and still managed to cark it.

Is this a route that everyone should take? Not necessarily, but it is clearly the future. Not just for environmental reasons, but also because this is just plain the way that the car manufacturing industry is going.

I can certainly do what I need to do, transport wise with this car, and I look forward to enjoying doing so for many years to come.