Posted in Opinion
Author: Alex  Published Date: November 29, 2021  Leave a Comment on Thoughts on Doctor Who Flux: Survivors of the Flux 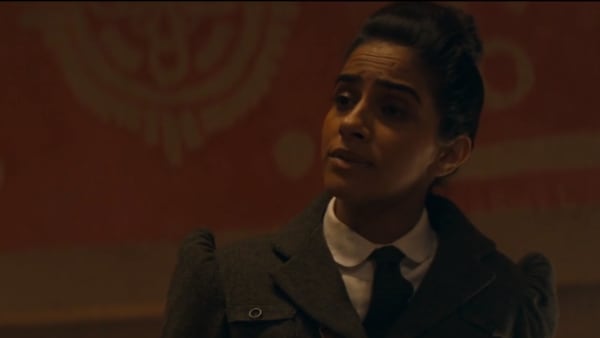 However, as is traditional around these parts, I’m wary of dropping spoilers on folks who might want a simpler review format. I hate spoiling anything for anyone, so in order to avoid that, I’m going to embed a video clip below. Lurk below that, and you’ll find spoilers aplenty.

For a series that’s teetered around being near incoherent for much of its prior four episodes, Survivors of the Flux presents a rather more structured approach, with what amounts to three seperate narrative flows to cover off.

Naturally, we’ve got the Doctor’s journey to discover exactly what The Division is. We don’t get answers to every question — there is still one episode to go — but it does actually slot neatly into what had already been discovered about the main series arc so far, right down to the idea that our universe was being deliberately destroyed while others would be established.

Then there’s Yaz, Dan and Eustacius Jericho’s take on, well… Indiana Jones, albeit a little early. We at least get an explanation (of sorts) for Joseph Williamson, even though I’m not exactly sure how a Victorian explorer handles random time travel being foisted on him quite so adroitly. More on that in my wider thoughts below.

Then we’ve got the Grand Serpent/Bel/Karvanista plot, which brings back Kate Lethbridge-Stewart, as well as a cute (but not too cute) nod towards a certain loud spoken corporal. It’s in no way clear why the Grand Serpent has ended up time travelling to Earth — or, given the Lupari blockade, how he’s done it — but he’s nicely Machiavellian in his deliberations, if somewhat obvious in some respects about it.

For once, however, we do get these threads actually tying in together through the episode (at least to an extent) as the Sontarans invade (seemingly through both the Lupari blockade and time itself while Azure and the Swarm deal with Tecteun in what would appear to be a rather final way… oh yeah, and Bel is back, and forced to travel to Earth by Karvanista, while Vinder is… somewhere undefined, but it’s the same place that Diane has ended up. Is he in the Passenger? It’s not very clear.

In any case, it all leads up to a cliffhanger of invasions, dustings and the potential end of the entire universe while the Doctor is also presumably at danger of imminent dusting.

As with all the other parts, I can’t really “rate” this episode because it still will hang on the finale. That’s also a little more true than for, say, War of the Sontarans or Village Of The Angels, because while things happened in this episode, it’s nearly 100% connective tissue rather than a full standalone narrative in its own right.

Which means while I can’t rate it fairly, I do have some observations to make:

While it’s racing towards its conclusion, it’s also rather sad that we’ve only got one more episode of Doctor Who this season. Not too long until the New Year’s Day special, however (which, spoiler alert presumably means that this universe survives, I guess), but before that, we’ve got… The Vanquishers.