Posted in Opinion
Author: Alex  Published Date: August 1, 2018  Leave a Comment on Rampage Review: How well does the movie stand up to the game? 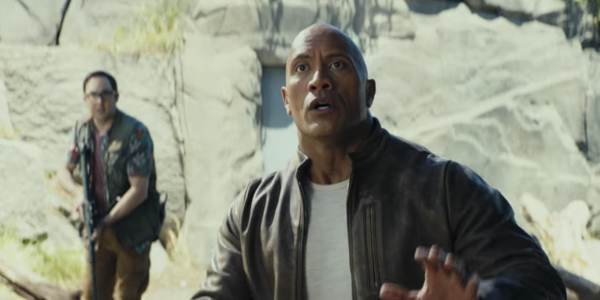 I finally got around to watching Rampage, so why not offer up an opinion?
Yeah, I know what you’re thinking.
Rampage?
Hardly cutting edge cinema there, Kidman, or even all that new.
Well, yes. Sure. Fine.
But I spent the best part of today on a plane on the way to South Korea, so why, I ask you, not spend a few hours watching Dwayne “The Rock” Johnson (no relation to Don “The Rock” Muraco, or for that matter a now burnt-down NSW landmark and ex-theme park, but I digress) chase a giant CGI Gorilla, a giant CGI Wolf and a giant CGI Crocodile… thing… towards Chicago?
That’s the kind of logic you just can’t argue with, if only because it make absolutely no sense whatsoever.
Although I guess I should give a fair warning that there might be mild spoilers ahead.
However, I will admit that my interest in Rampage was probably a little different to most cinema patrons. For most of them, The Rock is the drawcard, possibly followed up by the prospect of watching things gettin’ blown up real good like.
Whereas I could actually say that I was at first befuddled by the whole exercise, because it’s actually based on a classic arcade game that was ported to every system in existence back in the day. I own a few versions of Rampage, and while it’s fun in its own way, it’s hardly an epic drama.
Instead… well, it’s this:

Which is essentially the video game equivalent of a four year old building LEGO block towers and crashing his or her toy truck into them repeatedly.
And that’s probably why I just watched a movie that has a trailer like this:

Here’s the thing. The original concept wasn’t up to much, and neither is the movie. Frankly, Rampage made the most sense in an arcade setting.
Pretend to be King Kong, Godzilla or The Wolfman (without all that pesky licensing mess, hence George, Ralph and Lizzie) for a few minutes for your 20c, laugh, smash some buildings and move onto the next game you’re interested in.
At home, that thrill was hard to keep going over time, although Midway sure did give it a red hot go, with titles like Rampage Through Time trying to make it interesting.

Yeah, there’s a copy of that at home too. Even I don’t know why.
Anyway, Rampage as a movie is somehow worse, because it doesn’t really get even that basic tower toppling concept all that right. Sure, you’ve got to set up a ludicrous premise like this movie somehow, and The Rock can do his whole patented smouldering thing, but then what have you got?
Side thought: I’m somewhat spoiled on his whole smouldering thing since Jumanji: Welcome to the Jungle so effortlessly took the mickey out of it. Just me?
Well, what you’ve got is a distinct lack of peril for the most part. Sure, some folks get eaten (and the lead bad guy is, effectively murdered by the heroes and we’re meant to think that’s OK) and one of the monsters is turned good with the patented macguffin, and some things get mildly wrecked.
But hey, Rampage was a game about toppling buildings all across the USA. Instead we get a Wolf that leaps around a bridge, and a single key building that’s toppled, rather than an entire city.
If you were going to live up to the game, then go ALL IN. They certainly did with the script, and I’m not entirely convinced it wasn’t repurposed from the Asylum’s junk pile in the first place.
Hell, if Rampage can get made, I’ve got an exploding shark novel that Hollywood should read sometime soon. I’ll even let The Rock star, although clearly I’ll want a cameo… but again ,I digress while blatantly plugging.
I’ve long held the view that there’s a class of action films that are really only suitable for watching on planes when you’re killing time and not much more. Rampage passes that bar, but no further than that.
If you’ve got anything better to do with your time, do that instead.