In which my journey through Final Fantasy VII continues by way of pondering on a much more modern game with lots of depth.
I’m continuing on my playthrough of Square’s classic Final Fantasy VII, roughly now at the 16 hour mark and (if memory serves) nearing the end of disc 1. But I’m not going to entirely recap the plot to speak of, because you could find those anywhere.
Read also:
Retro recollections: Can I replay Final Fantasy VII?
Retro recollections: Final Fantasy VII: The Adventure Continues (for now)
Final Fantasy VII challenge week 3: Keeping the dream alive
Retro Recollections: Final Fantasy 7 Challenge: Hour 4: Working On The Train Gang
Retro recollections: Final Fantasy VII challenge hour five: The ups and the downs
Retro recollections: Final Fantasy VII: Hour 6-8: Big bad Sephiroth
Final Fantasy VII Challenge Hour 9: Kentucky Fried Chocobo
Final Fantasy VII challenge Hour 10-12: Hitting the wall
I mentioned earlier in the week to a games journalist chum as part of a discussion around what we’d been playing recently that I was working my way through FF7. He’d been playing through Dark Souls to a serious extent, and we got chatting about games that demand both precision and a lot of time to unlock all their secrets.
Now, I’ll be honest here. I appreciate the Dark Souls games for what they are, and I can see the quality there. Indeed, games that are deliberately precise and tough can often click into the grooves of my brain that seriously appreciate such approaches. A little difficulty curve isn’t enough to put me off. Yet somehow, despite quite a few attempts, Dark Souls and its sequels have never clicked with me. I could never get that essential level of “hooked” to continue.
I’m perfectly fine with that, by the way. It’s one of the great things about a video games scene that is some 40 years old that there’s games for absolutely everybody, but nobody has to appreciate every single game.
Well, except for Bubble Bobble of course.
If you can’t appreciate Bubble Bobble, the door is that way.
Ahem. Anyway, as is the habit for males of our age with enough funds to afford games but nowhere near enough time to dedicate to them as we did in our salad days, we were talking around the depth in games. 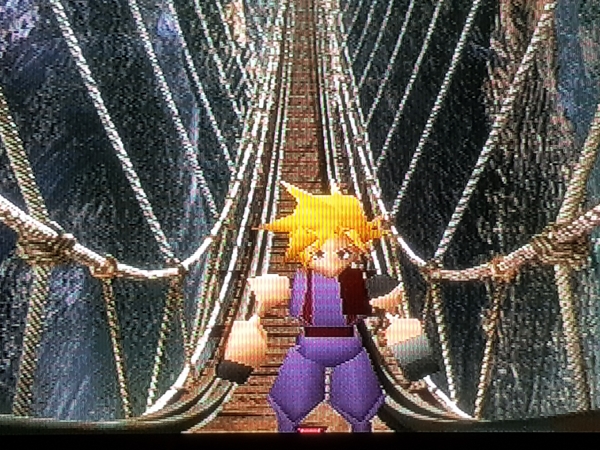 He commented that a big part of the fun in the Dark Souls series was jumping onto relevant subreddits to engage in the mystery of these series, working out how all the puzzle pieces fit together as a giant collective, all enjoying playing the game as individual instances and yet “together”. Dark Souls hasn’t invented this idea, of course, but its steep difficulty and deliberate obfuscation of game elements makes it ripe for this kind of analysis.
This got me thinking about Final Fantasy VII, and indeed, back on the track of completing it this calendar year. I really need to get cracking on that, because I have many calls on my time at the moment. A game that is 20 years old has naturally been cracked wide open by now, but I’m planning on playing through without using a guide to walk me through any of it, as I’d done two decades past.


That’s when I realised that while I don’t want to read ahead to what’s coming, there’s nothing stopping me reading backwards to see what I’ve missed. So I fired up the ol’ steam-powered Internet* and found a decently detailed guide.
Indeed, I’ve missed quite a lot. Lots of materia I could have right now, quite a few weapons and even a few sidequests I’ve strolled past, oblivious to their very existence. I could go back to some (but not all) of them and make myself more powerful for the challenges to come…
But no. Partly because then I’d be guiding myself through the game, which I’m trying to avoid doing, but also because it reaffirms something I’d wanted to prove with this whole exercise from the beginning.
I’m a decent way into the game now. Not quite a third, although my hazy memory says I can’t be too far off the end of the first disc, and I’m doing fine with the choices I’ve made. I love the fact that Square was so detail-oriented that they not only threw a lot of hidden detail into the game, because it gives it depth. At the same time, they carefully balanced the difficulty such that you could make these kinds of choices and still progress through the narrative without necessarily crippling your chances of success.

Once upon a time, this was how you sold a videogame. Quite a lot of copies of this particular videogame too.
Oh, and that music….
Yes, I’ve done a little grinding to be able to afford certain weapons and materia by now, and I suspect I’ll do more. Still, I’m going through the game the way I want to, and Square is fine with that, just as it’s fine with those going for a 100% completion rate. That was never my goal, but it reaffirms that while the visuals are dated and I’m still taking terrible screen photos (sue me!), FF7 remains a quality game.

Now if you don’t mind, I’d better get back to finishing disc one. Then I’ve only still got two thirds of this game to go. Including that moment. You remember the one.
Or if you don’t, then why aren’t you playing this game RIGHT NOW?
Oh yeah, time poor. Sorry about that. I know all about it.
*I wish I was kidding, but steam powered Internet is apparently aspirational levels of speed in Australia, according to our PM and former communications minister. It makes me weep, it really does. We discuss it in depth and regularly over on Vertical Hold.