Posted in News
Author: Alex  Published Date: February 1, 2021  Leave a Comment on Reminder: Do not bite phone batteries. Like… ever. 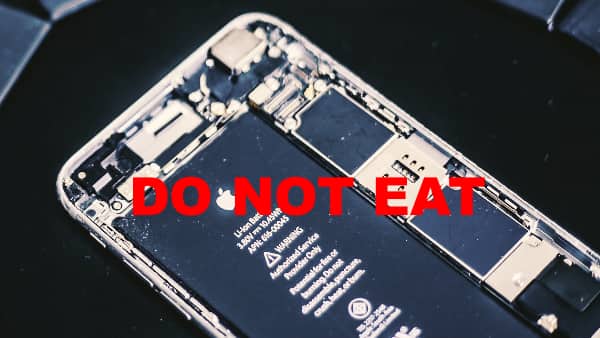 Is that a reminder you really need? It seems so, at least according to online reports that purportedly show someone biting into a phone battery “to give it a little nibble”. A dangerous little nibble, really.

This video (with a hat tip to Geekologie) apparently did the rounds on Chinese social media recently, and shows a man biting into a phone battery in a retail store.

Hilarity does not ensue, although reportedly nobody was seriously harmed.

Is it legit? I’ve no real idea, and my Chinese language ability isn’t really up to the translation task, although I’d be willing to bet at least somebody let fly with some kind of shock-based profanity within that mix.

Still, the phenomenon of poor third-party batteries is one that’s all too well-known, as is their propensity to release their power in less than regular ways.

The takeaway? Biting down on a mobile phone battery is never something that’s going to end well.

At best, you’d get a faintly metallic taste on your tongue.

At worst… well, you might not have a tongue at all any more.

Remember kids: Mobile phone batteries are NOT FOOD. Are we all clear on that now?