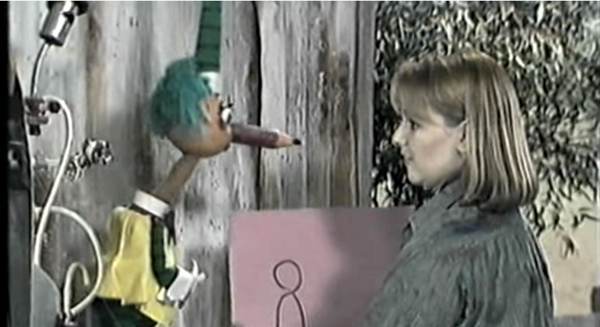 If nostalgia sells, why not rework an Australian children’s classic like Mr Squiggle?

It’s been a weird day here in Australia, with most of the focus on the LNP semi-self-destructing by way of choosing a new leader.

So in need of an escape, I made an off-hand joke about Mr Squiggle. This one, to be precise:

Sudden sad realisation: Given that Mr Squiggle is “the man from the moon”, he’d be turned back at the border these days and locked up in a camp offshore.

Perhaps that’s why we haven’t heard from him lately.

If you’re thinking “Mr… who?”, then you’re probably much younger than me.

This guy, who was a staple of Australian children’s TV programming for many, many years:

This led to me showing my kids the very few clips of Mr Squiggle that exist on YouTube, because, as classic Australian kid’s shows go, Mr Squiggle is rather non-existent in other forms of media.

I presume that’s some kind of rights issue, but even watching what’s there made me all too painfully aware of how old the clips looked.

And that got me thinking about whether or not you could (in the modern parlance) “reboot” Mr Squiggle for a new generation.

Of course, you’d have to make a few changes.

Mr Squiggle would, of course, have to update his drawing method, replacing his familiar nose pencil for an Apple Pencil,  drawing animated GIF memes on a 12.9 inch iPad Pro.

Grumpy favourite Gus the snail still has a role to play, although he’ll have to make some changes. For a start, he’s never going to be able to move, what with the sheer mass of the 85″ LCD TV on his back. Children will also have to get used to his film clips “buffering” due to the state of Australian broadband… but then they’re probably all too used to that anyway.

Bill The Steam Shovel would have to be recast as a grumpy Uber driver, having been replaced by a self-driving mining truck at work.