Posted in Humour
Author: Alex  Published Date: October 22, 2021  Leave a Comment on Can you improve a 2nd Gen iPod Touch with googly eyes? 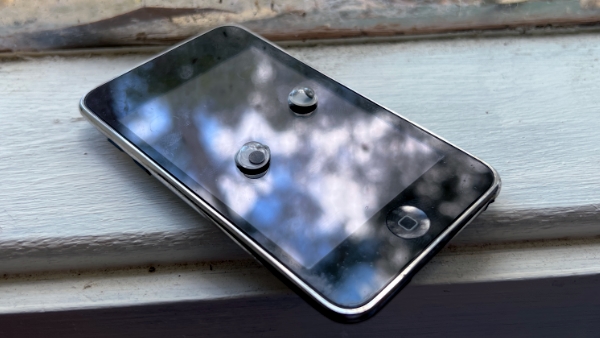 Apple’s design principles have changed a little since 2008’s 2nd Gen iPod Touch. Feels like time for some improvement.

The next item to come out of my old tech drawer is this 32GB iPod Touch 2nd Gen. I can remember exactly where and why I purchased this, too. It was not long after MacWorld in 2008 (disclaimer: I flew there as a guest of Apple), back when the first gen iPhone was only six months old, Apple didn’t want anyone programming apps for its devices, and it even charged for iOS upgrades.

Yeah, I’d forgotten that too, but a trawl around the webs found some guy complaining about it back in 2008 over at CNET.

That guy was me. I also wrote about iPod accessories for CNET and that’s still online, but the larger body of writing work I did for MacWorld Australia seems to have fallen into the Internet abyss. As I get older, more and more of my writing work seems to go that way, which is sad.

What isn’t sad is the iPod Touch 2nd Gen once I’ve dropped some Googly eyes on it. Behold!

This one’s an absolute keeper, thanks to the older games it can still play (and the fact it can still power up!), but as always, if you’ve got older tech cluttering up your home, responsibly recycle it!