A horrible Goose, to be sure, but a lovely game as well.

In most games, you’re cast as the noble hero. A figure to look up to as you struggle against the odds to overcome villainy in one form or another.

You’re cast as the eponymous anonymous goose, out to cause havok wherever you go. 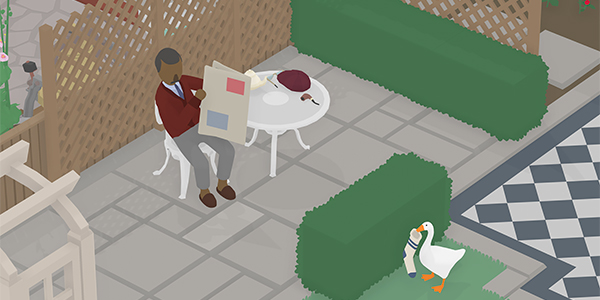 Why? Are you out for revenge because humans desecrated your wetlands or stole your true love?

Untitled Goose Game is an Australian-produced game that’s essentially a stealth puzzle title, with the primary hook being the delightfully animated visuals and, of course, the fact that you’re a goose.

Geese are funny looking creatures in real life, and developers House House have done a fantastic job bringing your Goose (or Gander, it really doesn’t matter much) to life.

It’s one of those games that really does sell itself conceptually on its trailer. If this doesn’t appeal to you at a base level — that base level being a horrible goose causing havoc — then it won’t be a game for you.

But is it worth playing? In short, yes. You’re limited in scope to the things an actual Goose could do, so you can run around, swim through water, pick things up with your beak and honk. There’s a dedicated honking button — on the Switch its the ‘Y’ button — and it’s the first control that the game teaches you, for a good reason.

Sure, you do use it from time to time to solve the game’s puzzles in some cases, but mostly it’s there because, rather like the horn in racing games, it’s fun to simply let off a string of honks from time to time as you revel in your goose-based mischief.

The game’s puzzles are presented with just enough detail to keep you intrigued, and range from breaking implements to unlocking doors, locking hapless (and for some reason mostly faceless) humans in and being the goose equivalent of the school bully. There’s a genuine — if rather malicious — joy in what you’re tasked to do, and I really don’t want to write too much about what those challenges are and spoil anything for you.

It probably says something profound about human nature that this is so fun to play. There’s a genuine feeling of satisfaction when you do solve a puzzle, not only from the logical part of your brain but also the comedic side, because it’s very basic honk-led slapstick comedy. 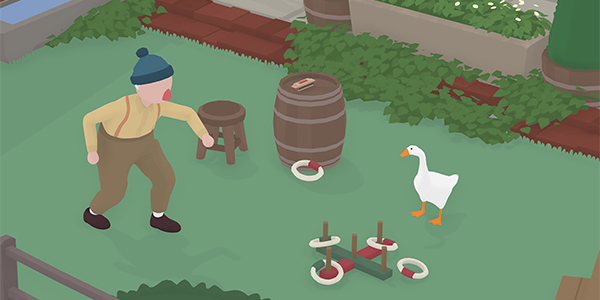 Now, Untitled Goose Game isn’t astonishingly long, and I can see some folks having an issue with that in an age where some titles run into multi-day playtimes. It’s probably only going to take you a handful of hours to work your way through the game’s puzzles.

But I reckon that’s OK, and for a couple of reasons. For a start, there are multiple approaches to some puzzles, some more brute force than others. While some may at first appear to be obscure, a little lateral goose-based thinking, or even just tinkering with the environmental obstacles will usually reveal a solution.

The game itself, while about a bullying goose, has a rather gentle and mild tone that makes it good fodder for that kind of “brain off” gaming where you want to play something but don’t want lots of fail states.

Get a puzzle wrong, and typically the hapless humans just take back whatever you’ve stolen to its original place, while staring at you a while.

It’s also a great social game. I’ve been playing through it with my kids watching, and while it’s maybe teaching them lessons they shouldn’t learn, the laughs that have ensued have been truly infectious.

More than once I was commanded by my kids to re-do a task (and I don’t want to go into details, because spoilers really would ruin this game) simply so they could watch the reactions of the humans to what was happening!

I’m not big on review scores — I think they’re rather reductionist — but seriously, buy a copy — you won’t regret it.

Also, and this is important…