Posted in Games
Author: Alex  Published Date: October 31, 2021  Leave a Comment on The problem with the Switch N64 Expansion Pack isn’t the price, it’s the games 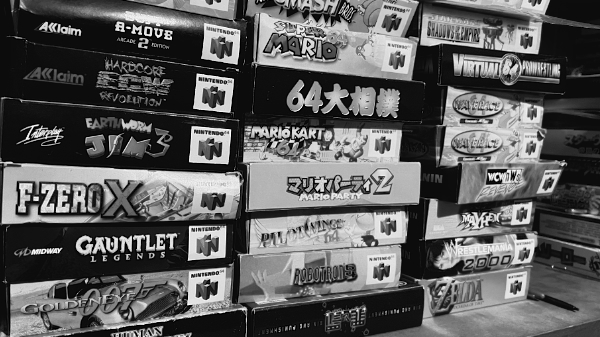 Amidst the complaints about performance (either online or emulation) and the more nebulous “value” equation, there’s a much bigger problem with the N64 games that Nintendo can add to its Switch Online Expansion pack.

So, the Switch Online Expansion pack is live, and all over the web, there’s complaining.

There was complaining upfront about its value (especially relative to the competition from Microsoft and to a much lesser extent Sony), and once it was live, complaints about emulation accuracy, input lag and of course service lag when playing what were originally couch multiplayer games over the Internet.

I think there’s a much bigger problem here.

I don’t want to dip into the “value” side of the equation for the launch titles too deep, because it’s an inherently variable matter.

You might get hundreds of hours of happy gameplay out of Operation: Winback and Mario Kart 64, and almost none out of the titles on GamePass or PSN. If so, that’s great value for you. If not, it’s not.

But there is, I think, a much bigger issue when considering value, and that’s to do with what Nintendo can add to the service.

Before I start, I guess I should point out that I’ve not yet paid for the Switch Online Expansion Pass. I’m not likely to, because I’m one of those weirdos who actually kept their N64.

In fact I’ve got a couple, because I rather like the Japanese models too… but I’m getting ahead of myself, and in any case, I can 100% recognise that I’m an outlier. Most folks didn’t, and for them the nostalgia hit and perhaps opportunity to check out some “new” retro titles has appeal. As a big retro gaming fan, I can’t kick that idea.

According to lazy Internet research I’ve just done, there’s around 716 licensed (and a number of unlicensed) NES/Famicom games, and 1,757 SNES titles. Plenty to pick from, then.

The N64 wasn’t quite the same hit, and as a result it’s got a much smaller library. Quite a bit smaller, actually, with just 393 games released for the system across all territories.

393 sounds great, right? Huge library of games to dip in and out of, even if Nintendo has only launched with 9 titles to start with and a few more coming that we know of.

Except it’s not 393. It’s not even particularly close to that. I’m going to make some assumptions here for future releases, and I could be 100% wrong. Punditry is like that… but I don’t think I will be wrong.

So we’re starting with 393, but it’s not 393. It’s 384, because we’ve already released 9 titles, including some of the system’s biggest hitters and biggest sellers, because Nintendo wants you to be excited about its more expensive online gaming service

If I’m Nintendo, and I’m looking for new titles to add to the Switch Online Expansion Pass list, I want titles that will involve the least work possible in terms of emulation, updates and so on.

I’ve personally no idea how much work is involved bolting the online stuff into games, but I’m going to guess that it’s a framework that sits on top of the emulator for each game, so that Nintendo doesn’t have to reinvent its code every single time.

The Switch is sold globally, so that will favour — if not give an outright bias — to games with English language support, or at least both English and Japanese translations that are already approved. Nintendo could just release games to the Switch Online Expansion pass in Japanese only, but that’s going to lead to a lot of disgruntled gamers worldwide.

What that means is that the odds of seeing much (or any) of the Japan-exclusive N64 games is pretty low. Never say never — they did do Sin & Punishment many years later — but it’s low. That knocks (from the list I’m working from) 51 titles out of contention straight away.

That pulls us down to 333 maximum. But we’re not done yet.

The N64 library isn’t large, but it had a surprising quantity of licensed sports games that you could play.

Licences that have now 100% expired and would be murder to reacquire presuming too many people actually cared. By my count there’s at least 73 of those, possibly more (I may have missed some) across NFL, FIFA, Skateboarding, NHL, Olympics, Tennis, Pro Wrestling and Formula One.

So yeah, that means no WWF No Mercy, the finest wrestling game of all time either. Bummer.

But of course licences aren’t just the domain of professional sports. There’s also a slew of games based around popular movie, TV show and comic books to consider. By my count there’s at least 34 of those.

The big hitter here is of course GoldenEye 007. Classic game, one of my favourites, but pretty unlikely to see a re-debut on the Switch Online service. I mean, we know (because it leaked) that Microsoft had a basically-ready-to-go updated version for the Xbox 360. Microsoft loves throwing money at its gaming ambitions in nearly obscene quantities and even it couldn’t make a Goldeneye re-release happen.

With the rights splitting between Nintendo (original publisher), Microsoft (owners of Rare), Amazon (owners of MGM) and IO Interactive (current Bond games licensee unless I’m mistaken) and Nintendo far more conservative when it comes to spending money rather than making it… I don’t see it happening.

Then again, that IP list does also include a number of Star Wars games, and as I saw with both Antstream Arcade and the AT Games Legend Flashback, Disney is perhaps willing to licence out Star Wars games if there’s money to be made.

Thankfully, that IP list does also suggest we won’t be seeing Superman 64 pop up any time soon, so maybe that’s a small mercy.

However, it does shrink the library even further, down to a maximum of 226 games, or maybe less if I’ve missed a sports game or IP in there, which is always feasible.

And here’s where it gets even trickier for Nintendo, because while there are still some gems in the N64 library within that 226, it gets much harder to see them for the weeds, and most of them are not first party Nintendo titles.

It’s arguably fair to suggest that Nintendo will release everything that makes sense from its own catalog of N64 games, but there’s a few problems there.

Microsoft has, oddly enough, allowed Banjo Kazooie to be part of the Switch Online lineup, which means there’s hope for other non-GoldenEye 007 Rare-produced games, such as Donkey Kong 64, Diddy Kong Racing or Blast Corps.

Still, taking Microsoft into consideration you most likely lose other titles that Microsoft has control of through its acquisition of studios such as ID software.  That loses you the likes of Doom 64s, Quakes etc from that list too. You can buy Doom 64 for the Switch — why would Microsoft let Nintendo just give it away on a competing games subscription platform?

We’re down to around 225, and it’s probably worse again, because there’s other hard-or-unlikely-to-licence games in the list to consider.

Sony’s ownership of Psygnosis means that Destruction Derby 64 and WipeOut 64 are unlikely. EA’s got its own games subscription services, so that probably kicks out titles like Command & Conquer, Road Rash 64 and Sim City 2000.

Road Rash 64 might not be that much of a loss. Technically a THQ title, but I believe it’s still EA that would hold the rights on that one now. Or it could be even messier… which makes it even less likely.

There’s another easy 25 by my count, and probably more where both the ownership of the publication rights and the competitive landscape in 2021 make their appearances highly unlikely.

Nintendo can of course publish its own Mario, Zelda and Pokemon games and those are good additions, although it’s not a huge list in real terms. Mario Golf, Majora’s Mask, maybe the Pokemon Stadium games (though those have link features that would be a pain to resolve) and… Hey You Pikachu? Anyone hanging out for Hey You Pikachu?

And just like that, we’re down to 200. Again, breadth isn’t everything, but here you also hit a problem of repetition.

I’ve not included the Konami-produced International Superstar Soccer games as “sports” games because if I recall correctly they didn’t have official licences (I could be wrong, let me know), but that’s four titles right there. Anyone want all four? Are gamers going to clamour for all four? I’m going to guess no, so even allowing for one we’re down to 197 if there’s even interest there.

Same story for your Mortal Kombats, Rampages, Top Gears, Turoks and quite a few more games that saw more than one release on the system. Even being conservative, I’m down to 190, and a lot of those are games that were (cough) not exactly regarded as classics even in their time.

Anyone hanging out expectantly to be made John Romero’s bitch once again? Because back when it was new, pretty much nobody was.

Every console library has its stinkers of course. That’s never going to change, even now, but once you pare down the N64 library from the stuff that would be either impossible, improbable or economically infeasible to do, you’re left with slim pickings indeed to justify an ongoing investment in a subscription expansion.

Which isn’t to say that Nintendo can’t pull some gems out of all of this.

I love my N64, I love the library of games that I own for it, and I’m still just as keen as I ever was for people to look back on gaming’s rich retro history.

A service that allowed more folks to play Wetrix, Mischief Makers, the many weird Japan-only Tetris games or the Mystical Ninja games just to name a few off the top of my head would have hours of great gameplay in them.

OK, WWF No Mercy is unlikely to impossible. Not only does 2K Games have a vested interest in people buying new WWE games, but there’s also the awkward conversation you have to have when you realise the likeness rights would include paying money for, well… Chris Benoit.

If somehow Nintendo could sidestep the issues of licensing WWF No Mercy and somehow get Virtual Pro Wrestling 2 with online play, they could indeed just shut up and take my money.

I strongly suspect Nintendo will at some point play mean on this and just make the Switch Online service a single-fee (probably higher priced) service, rather than a split one.

Until it does so, however, I think it’s got a tougher job landing solid gold hits onto the service to justify it than many people think.